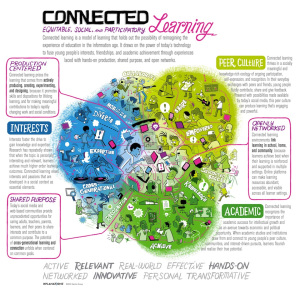 Watering the Seeds of Interest - in Libraries and Everywhere

A friend who runs a summer camp recently described to me the way older campers have “free choice” time some afternoons. Counselors decide what they’ll be doing based on what they know and enjoy – playing guitar, building a canoe, crafting something – and then campers have free choice of which counselor and activity they want to do, if any.

My vision of Connected Learning is that practitioners in all kinds of spaces are realizing that bringing that “free choice” learning into other spaces where young people (and adults) are learning makes sense and is worth the time and effort. Those spaces could be anything – museum spaces, learning labs, summer camps, classrooms. Bernard Bull (@bdean1000) suggested on Twitter that “Libraries and cafeterias may be the hub for 21st century learning and self-organized learning environments #connectedlearning #education”.

And Buffy Hamilton is one of those practitioners who is a great model for kids in their (Unquiet) school library, because she is passionate about what she chooses to do, namely create a communally constructed participatory space for learners and learning. She talked about it in a webinar last week (archive here).

In her school library, Ms. Hamilton tries to use the lens of participatory learning as the context for making all programming decisions. She thinks of the library as a common text that everyone contributes to – to tell “the story of library.” She wants students to be empowered, confident, and to have plenty of ways to create and to communicate. These things contribute to her vision of creating in the library a culture of wonder and inquiry and learning. (Here are her slides.)

Being passionate about what you’re learning together shows, and anyone can be that kind of role model. So when the students in David Preston’s classroom asked what they could do to create better relationships with their own school librarians, Ms. Hamilton suggested that the students talk to them about how they want their library to be. When a student asked why some teachers seem to do the bare minimum, Ms. Hamilton suggested that the problem might be that those teachers aren’t doing what they are passionate about (in addition to being weighed down by mandates from above).

In my work for the National Writing Project and as a young librarian, I’m inspired by Ms. Hamilton’s vision. Let’s be passionate about what we do. Let’s make all spaces into learning spaces and water the seeds of young people’s interests so they can grow. Let’s try to follow her lead as she dwells in spaces as a gardener, with the sense that there is always work to be done no matter how well things are blooming.