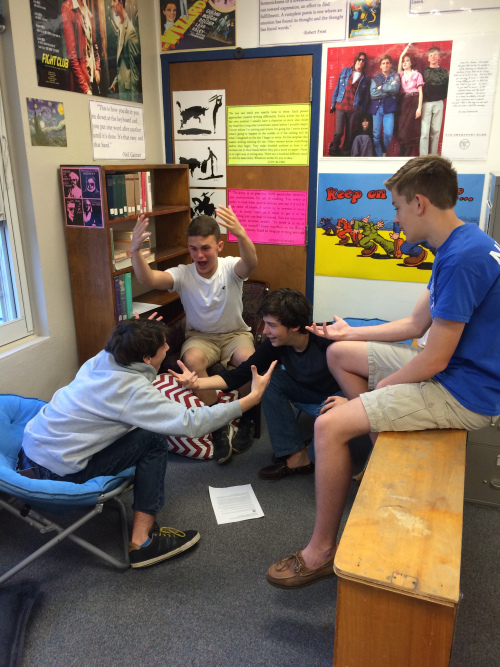 Thoughts from our Blog Unit II: A New Year's Wish for Compassion

As I mentioned in my previous post, my students finished the year with a unit on blogging.  It was a great opportunity to teach argumentation and the rhetorical situation. During this political season, I had no dearth of subject matter.

Maybe because I’ve been hip deep in contentious subjects for six weeks, I have been drawn to stories of harmony and humanity.  During my morning commute, two stories from NPR caught my ear.

One was about a Tennessee solider named Roddie Edmond who was being awarded posthumously Israel’s “Righteous Among the Nations,” the highest honor for non-Jews who risked their lives to save Jews during World War II. According to the story, it was the first time a US solider has been given this award. NPR’s Emily Harris interviewed Edmond’s son, Chris Edmonds, for the story.

Edmonds, a master sergeant from Knoxville, was the highest ranking American solider in his Nazi POW camp, and when the guards demanded all Jews in the camp step forward to be identified, Edmonds ordered every US solider to step forward.

“They cannot all be Jews,” the German commander said, according to the Yad Vashem Remembrance Center.

“We are all Jews,” Edmonds replied.

According to the story Chris Edmonds relates, the commander was furious.

“He turned blood-red, pulled his Luger out, pressed it into the forehead of my dad, and said, ‘I’ll give you one more chance. Have the Jewish men step forward or I will shoot you on the spot.’ They said my dad paused, and said, ‘If you shoot, you’ll have to shoot us all.’ “

The second story was about John Graziano, one of the first elementary-age children diagnosed with HIV in the United States.  During a visit on NPR’s StoryCorps, Tom Graziano, John’s adoptive father, spoke with John’s elementary school principal, Paul Nilsen, about the events of 1986.  When John’s diagnosis came to light, Nilsen was adamant about John staying at his school. “We’re gonna treat him no different than we’d treat any other child in the room,” said Nilsen.  John’s classmates were equally magnanimous. In the story, Nilson recalls, “If anybody asked the kids in the room who had AIDS, each of them would reply: “I have AIDS.”

These two stories were on the air during the first week of December, two weeks before Michael Moore’s open letter to Donald Trump and subsequent social media movement #WeAreAllMuslims, but I had the same reaction as Moore to the divisive, inhuman rhetoric that has seemingly dominated current political conversations.

I am saddened by the hate and bigotry on display in our culture.  I call on all teachers, regardless of subject or grade level, to teach kids to think critically, to recognize bias, to recognize emotional manipulation and fear mongering as a weak argumentative stance, and to research claims made on social media for credibility.

Every lesson, at its core, should be grounded in recognizing our own humanity in others and striving to engender compassion, consideration, and empathy in all students.

We could take a lesson from Roddie Edmonds and the second-grade classroom of John Graziano. Yes, we are all Jews. We all have AIDS, and we are all Muslims. But unfortunately, we are also all Donald Trump and Kanye West. We are Obama and Osama, Jesus and Judas, Atticus Finch and Bob Ewell.

As Atticus says, addressing his young daughter, Scout: “If you can learn a simple trick, Scout, you’ll get along a lot better with all kinds of folks. You never really understand a person until you consider things from his point of view. Until you climb into his skin and walk around in it.”