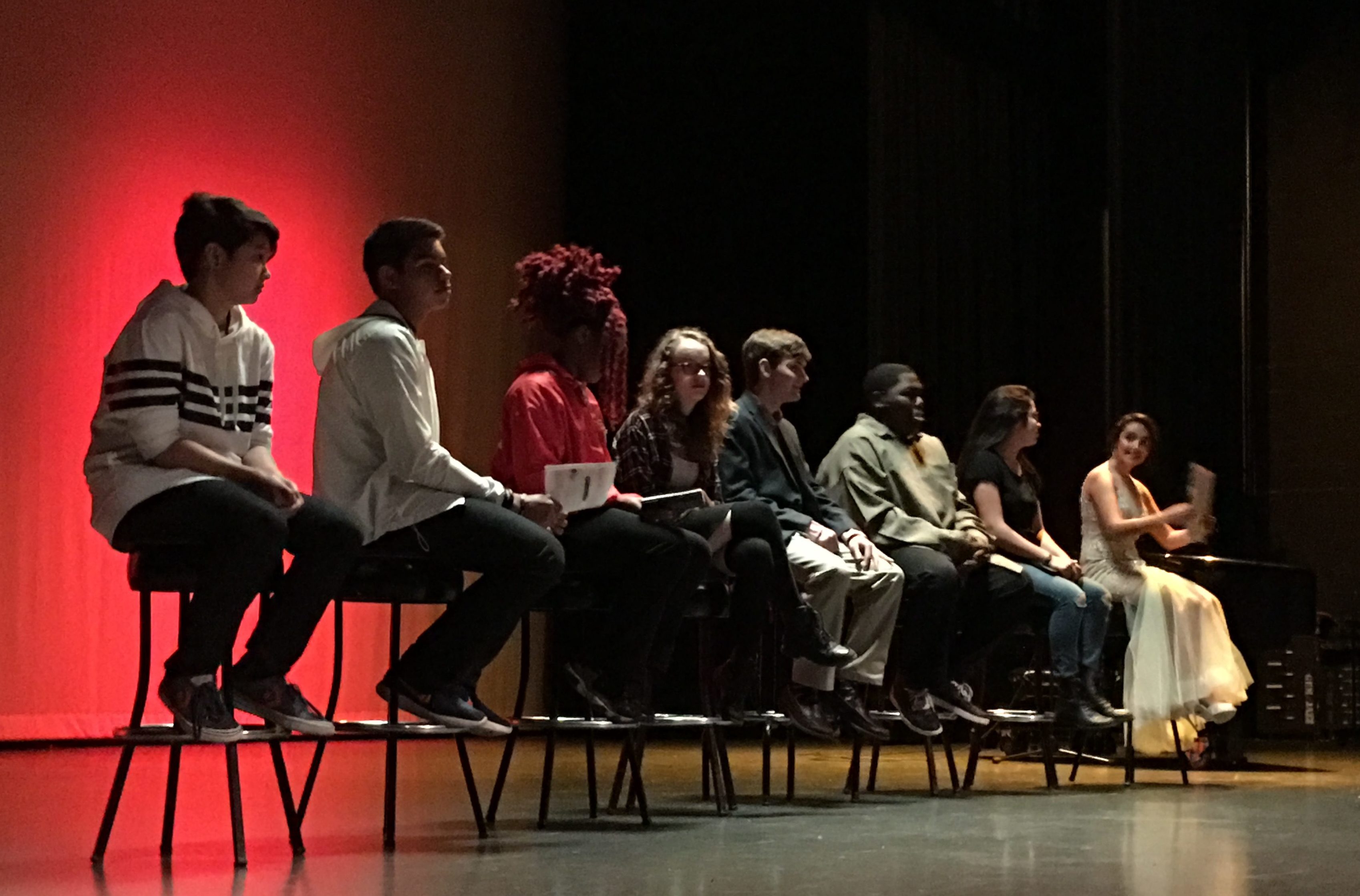 Joseph took the stage and we all inhaled deeply. We knew the audience would be shocked and inspired by Joseph’s story – just as we had – but only if they could hear it through his accent. We hoped they would catch the brief moment when he recounts how drinking water and sleeping on his belly would lessen the hunger pains when he was in a refugee camp. We hoped that audience would understand how hard it was to be a kid on stage in a room full of adult strangers, sharing a difficult experience, trying to gain command of a second language, feeling terrified and vulnerable but believing that listening to each other stories’ is what can build a better community, city, world.  Joseph had an amazing story to share but we wanted that audience to be amazed by Joseph himself. And, of course, we were relieved when they were.

Joseph was one of the 2018 KC Storytelling Scholars, a cohort of 30 students from 16 different high schools in Kansas City. Launched with an LRNG Innovators Challenge Grant in 2016, KC Storytellers is designed with two goals in mind. First, we want an ongoing opportunity for students from our city’s segregated school districts to write and share stories with each other for the purpose of breaking down divisive barriers, like race, within our community. Second, we want to expand the audience and purpose for personal writing in high school classrooms. 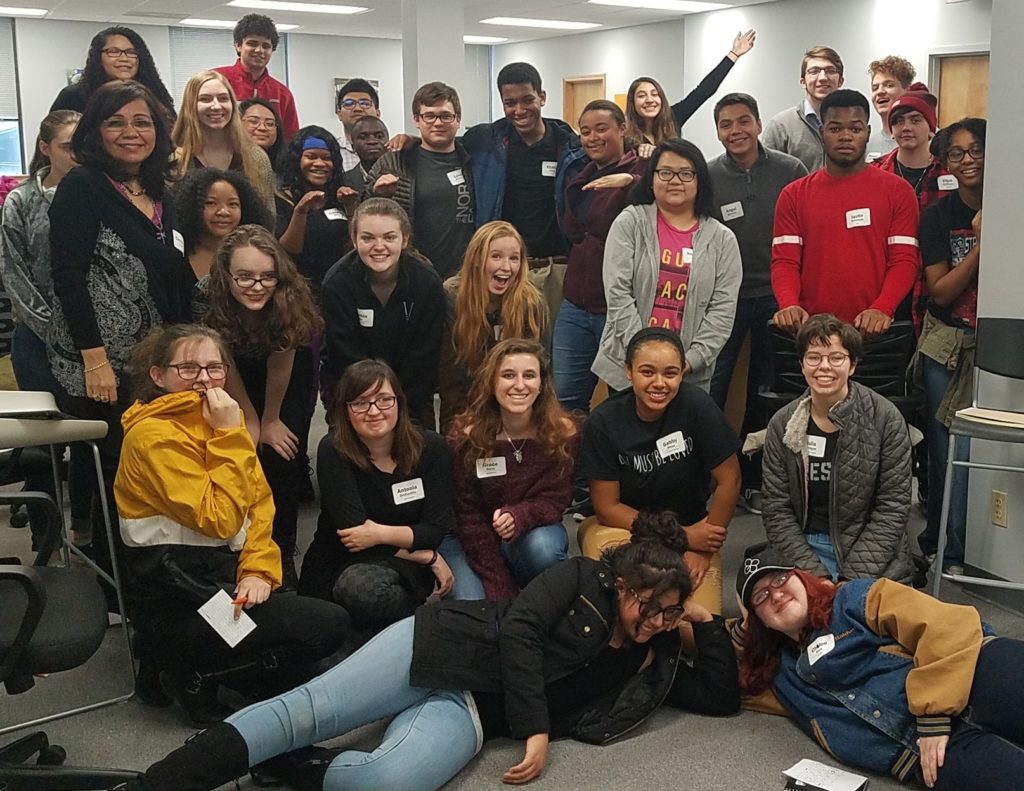 To accomplish our goals, we ask teachers from all area high schools during the fall semester to nominate up to 5 students to become KC Storytelling Scholars. These students receive an invitation to accept their nomination if they can commit to the workshop dates and the program’s goal.  The cohort of KC Storytelling Scholars come to a Saturday event in February where they write in response to storytelling prompts, share their writing with each other, and then craft a personal story to perform at the open mic portion at the end of the day. At the second workshop in early April, the Scholars come after school for an evening workshop to develop a new story or create a digital story, which they again share at the open mic at the end of the workshop. Finally, we hold our community event on a Saturday evening in mid-April. The Storytellers arrive for a three-hour rehearsal and then perform or show their digital stories in front of a community audience.

When Joseph’s teacher nominated him last year, she wrote me a private message. She wanted to be sure that he would be okay as a non-native English speaker in the program. I knew that she was being protective of Joseph; she wanted to know if this experience would further alienate Joseph from the community or actually bring him more fully into it. I assured his teacher that he would be an asset to our group and that the design of the program would ensure that he felt valued. But for this to be true, the program would have to be unlike school, where kids like Joseph often struggle to feel valued in a system designed to rank students by test scores and penalize English Learners. Also for this to be true, the audience who listened to Joseph’s story would have to understand our purpose for giving the stage to students who had not had much time devoted to craft or story performance.

Our KC Storytellers leadership team has struggled to ensure that the program is unlike school. When we are planning a workshop agenda, someone often says “That sounds like school!,” and then we get to work to make changes. As teachers we know how to design curriculum where community-building activities are in service to a larger goal (engaging learners,  but we don’t often design experiences were building community is the goal.Because being not-like-school allows students like Joseph and other typically marginalized kids to work on an even playing field with their peers. And being unlike school gives teachers a new way to imagine their classroom practice. So we make sure that teachers are doing the same things the students are doing instead of delivering mini-lessons during the workshops or making decisions that the students could make themselves. 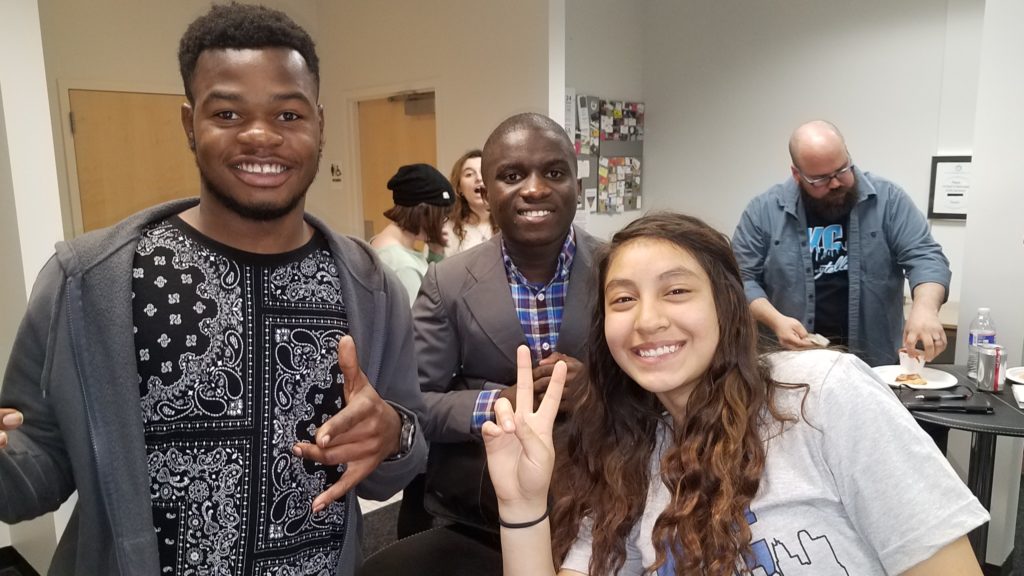 “The adult and student interaction was amazing, we were treated completely equal and not looked down upon in anyway what’s so ever. It felt like we were people and it was such an amazing environment.” 2018 Storytelling Scholar

The KC Storytellers is not like school but we are teachers and students and librarians and storytellers. When we invite the community to come and hear the stories performed by the students, we know they may expect these stories to be polished and exemplary. We disrupt those expectations by illuminating our purpose and turning the audience into storytellers, too. The community celebration includes a group poem written by the audience and performed by the students near the end of the night.  In this way, we invite others to come and take part in the work of building a better  community. We share our stories that can be pretty raw and unpolished but are always true and revealing and whose purpose is to bring us closer together. We believe that we all need more experiences that intentionally bring us closer together.

What Learning Can Look Like: Redesigning with LRNG Innovators
by Christina Cantrill