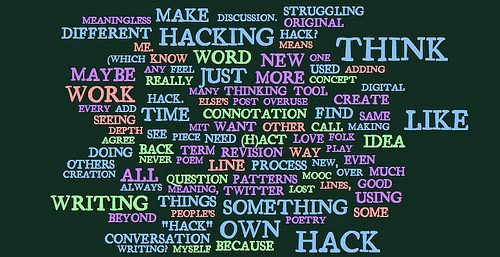 The Feldgang and the Emergent Future: Reflections on Facilitating Week One of the #CLMOOC

Let me start my reflection by explaining a German term I picked up from Otto Scharmer’s visionary work on leadership, Theory U.  He calls it the Feldgang or field walk.

Some old-timers I know say that the best fertilizer and tonic for a field is the footsteps of its farmer.  The Feldgang informs the  reason and the imagination.  My wife and I take them on a regular basis and see truly bumfuzzling complexity.  For example, there aren’t any persimmons this year. Why?  Or why have the sheep had so many problems with parasites this year?  Or will the wild blackberries make this year and if they do will they taste insipid from too much rain. Or what happened to the yarrow in this meadow. Or…you catch the notion.

The Feldgang is all about observation. This reflection as well as the one Kevin has already set before you in his field walk are intended to not only note what has happened, but to attend to what is emerging. Here is a small sample of what I saw in my field walk.

Elyse mentioned being gone on F2F meetings during the earliest formative stages of Cycle One.  That time was critical in building momentum for the remainder of the cycle.  G+ is a good tool for that because it is so immediate.  While it bears watching, I don’t share Kevin’s worries about being G+-centric.  Beginners seem to pick up its initial use quickly, but like me it has taken them a while to pick up on the ‘+’ and ‘#’ naming and tagging.  Those two conventions are key to ‘getting’ G+ and I know I will keep emphasizing them and modeling their use as well as referring to Joe’s excellent guides.Perhaps we just need to nurture the make bank, the blogs, twitter, curated sites, and group linkups in order to balance out any potential overuse of any one community tool.

I have found my PLN to be both expanding and contracting. For example, it is expanding in my email box with G+ notifications.  In fact, I finally turned them off on Thursday when Kevin and I were ramping up for twitter chat/new post/curating on Storify/newsletter.  I just kept the community site in a pinned tab in my browser on my desktop, laptop, tablet, and phone apps.

It is also contracting in other areas of my PLN. I pay less mind to anything not #clmooc related.  The problem there is that I need both to talk to each other. Paradoxically, I don’t feel less informed from the contraction in the land of MOOC.  Weird.

I felt pretty single minded from the beginning. My overarching connected learning principle was the one that has been my credo and blog tagline forever–always connect.  But it one thing to say and believe that while quite another to act on it dozens of times a day in ways both large and small.  Truth is, it is exhausting. To act on principle is exhausting. At least it has been for me.

I am reminded of a great David Sedaris story about the “four burners” in one’s life–family, friends, health, and work.  His argument is that we cannot keep them all going full tilt all the time.  There just isn’t enough gas.  Which ones have you turned down or will you turn down?  Most people say they can have it all, but for me I had to be full of intent with each burner as I ‘did’ it elsewise I would simply spend the most time on the simplest thing in front of me.  I had a troublingly difficult time with this. The good news is that I am getting better at this serial tasking on my life burners and hope to have this a bit more under control as I approach my own cycle in week four. I would just advise,  “Facilitators, facilitate yourselves, too.”

The last part of the Feldgang is about the connection I have made with Kevin.  I always latch onto the smartest folks in the room and I wasn’t wrong about that working with Kevin.  I can’t even begin to list all the ways I have benefited from my week’s time with him.  Google Hangouts, twitter chats, emails back and forth, facilitating on the community…to say it has been ‘transformative’ is too abstract.

An analogy is better.  Take the lowly plumber’s check valve.  Water flows through it, but it can’t come back.  I have moved through a check valve this week and I ain’t comin’ back.  That’s what is has been like working with Kevin. Thanks so much, buddy.

I think that in a larger sense these personal connections show that we need to mark down in facilitator’s document the ways we have connected (before, during, and post MOOC).  In addition to that I think I will direct part of my attention to asking Stephanie and Karen this week a simple question, “Is there any way I can help?” and I hope they do not hesitate to ask me for help.

One of the reasons Kevin and I got on so well was that we are both early birds.  He would get on at 5:30 and I (in my slow, Central Time Zone) would be up at 4:30 available for big projects and small. Maybe future pairs of facilitators can find suitable venues.

That’s only part of the Feldgang. Isn’t that always the case in ecosystems.  It isn’t just complicated. It is complex.  And if you don’t know the difference then let me refer you to Twain’s distinction between the lightning bug and lightning.  I haven’t even gotten into the field itself–all the stuff we move about in digitally.

I will save that for a longer post and more thought and the July retreat, but I want to leave you with something suggestive about the MOOC and connected learning principles in general.

I mentioned Otto Scharmer’s work earlier, Theory U. In this book  he asserts that it is our duty as leaders to face the “crisis and call” of our time whatever that is and wherever that is.  In education I think the call is digital learning.  And the crisis?  We don’t lack for any number of crises in education dilineated in such ugly prescriptions as “Waiting for Superman” or such narrow and proscribed ones as Khan Academy.

Scharmer noted that all of these limited attempts to find a “crisis to solve” misses a much wider and deeper problem. This ‘mundo’ problem is what “peace researcher” Johan Galtung calls “anomie”, the loss of norms and values, and “atomie”, the breakdown of social structures.”  Yet I am optimistic. This week I discovered that connected learning principles might just be our attempt to rebuild norms and values and that the CLMOOC is a new institutional structure for doing that.

I don’t think we can return to some Golden Age (impossible,the arrow of time never returns to the bow) nor do I wish to defend the status quo (just too exhausting in the long run). I am left with the Feldgang of the future and how we are being drawn there in this MOOC, a new social landscape with invisible hazards and joys.

I know my sweeping rhetoric is quite purple and grandiose so let me bring the analogy quite actually to the earth.  We are stewards of a very thin substrate of soil (our MOOC) we plant our seeds, tend our ground, and while we think we know what we are going to reap it is just as important for us to constantly be looking for, as Scharmer puts it, “the future possibility that is seeking to emerge.”  I sense that play is emerging as one of those possibilities. And ‘making’. And ‘remixing’–those are the genetic ‘sports’ that are being spiraled out of our work.  There will be more and I consider it our most important work to identify and nurture them as we find them.  They are our futures just as surely as our children and our learners are our futures.

Thank you all for opening up so many doors that open up even more doors.  In fact, it is doors all the way down.  Cool!

flickr photo shared by octaviosn under a C...
by Kevin Hodgson
See All Posts
Collection