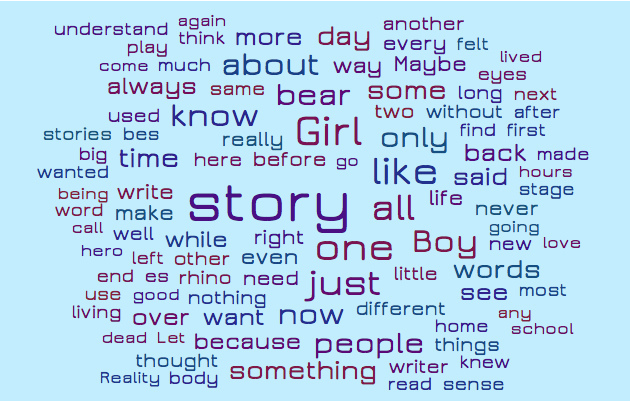 The Crowdsourced Novel: Collaborative Storytelling on a Grand Scale

I could not spend the entire day yesterday playing with the project known as Read/Make, or Digital Writing MakerText, in which people are invited to create a crowdsourced novel collaboratively in just 48 hours (see premise/rules). But after a lot of writing in the morning, I did periodically pop into the Google Doc where the novel (on theme of  how writing and reading is changing) is unfolding, just to see how things were faring. What was happening was magical and strange, and very fun to watch. (I created the word cloud about mid-afternoon from all the text, although there are links to videos and images and more, so it is merely a slice of the story in a moment in time).

I’ve been contributing to a few chapters, including a skit about a bear and some kids. I started that one, and watching how others have come along and edited my ideas (the bear eats the kids), added to the story and then shifted it in some very different directions provides a very interesting view of the entire writing process. I’ve gone back in to format the writing into a skit, but other than that, I have just left it alone. I did not want the bear to eat the kids, but it happened, you know? Here, you have to let words go, and you write them knowing they are merely “gossamer” (reference to another chapter in the story) that might take hold or suddenly become transparent and disappear when another writer enters the page.

How this entire document will hold together — what literary glue will emerge to bind the disparate parts — seems to me to be unknown at this juncture, mainly because we still have another day of writing. I suspect some grad student somewhere will have a blast with this 48 hour adventure, picking apart the way that distant collaborators write collectively in a digital age. It would be interesting to cull through the revisions, for example (if one had the time and inclination). One complaint about Google Docs for this kind of collaboration is that videos do not get embedded, which is a shame, since multimedia documents are anchored by video (and audio, which also do not get embedded into the story). You have to make links, which breaks the narrative. The reader leaves the page, and knowing how we read online, they might never return (particularly if there is a cat video in the YouTube recommendation sidebar).

I found myself weaving in and out of the stories, adding a line here and there, and maybe a part of two. I felt reluctant to remove text wholesale, even though I know that is part of what we sign up to do. It still feels like theft or vandalism. Someone put those words down on the screen. Who am I to remove them? And yet … we are both the collective writer, sharing the screen together on a single piece of text. I have as much right to remove as they do to add. I think. This is where the idea of a MakerText is intriguing and emblematic of the age we live in. One of the chapters (which were set out through a collaborative brainstorming session prior to the launch of the story) had a term that I had never heard before: Harbl. It has to do with replacing words in text, partly in a snarky way to generate laughs and partly in a way to remind the writer to expand their vocabulary. I had to look it up. I created this visual, back of the napkin story, and here is where I was sort of wishing someone else would pop in and add to it. Yet no one has. The fact that no one else added to this chapter had me wondering about how different it is using image versus words here. If my words are in the text, you can change, add and remove my ideas. Not so with an image. You can completely remove it, but you can’t easily alter it. Maybe you can remix it (please, do) but it isn’t necessarily simple to do. Not like writing a word or paragraph. That story as image is mostly locked into place. I think I might go in and add some word buffers around the image, as a way to invite others to write with me. Will that change the collaborative nature of the chapter? We’ll see.

Peace (in the collaboration),
Kevin