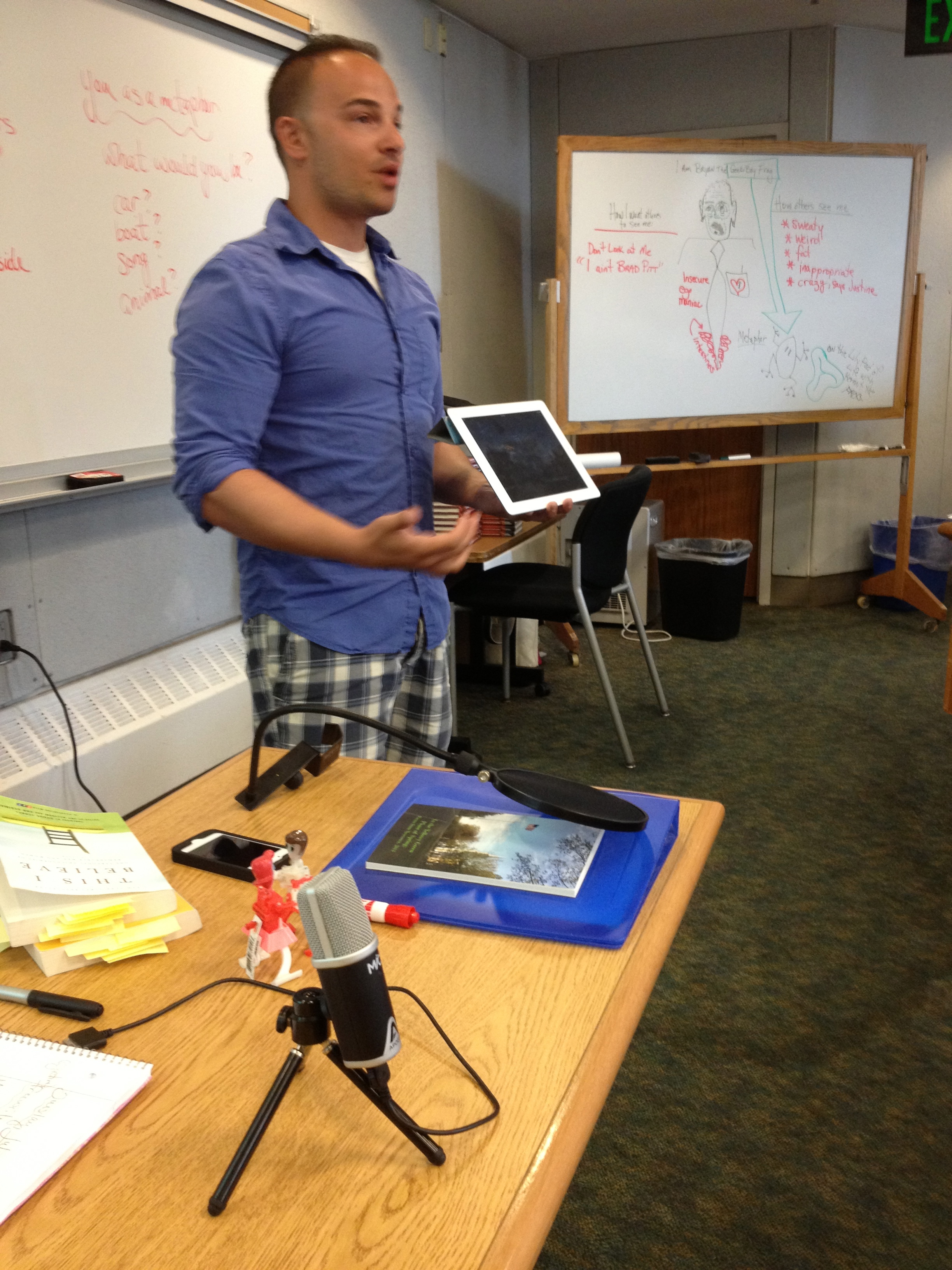 In the summer of 2013, the Connecticut Writing Project at Fairfield University hired Bridgeport teacher-of-the-year, Shaun Mitchell, to be a digital liaison and supporter of 21st century literacies. Mitchell provided Connected Learning between the teacher Invitational Summer Institute and Young Writers’ Institutes held on Fairfield’s campus. Mitchell, who teaches English and Drama at Central High School, previously received a 2012-2013 enhancement grant to improve technology in his classroom through National Writing Project SEED funds (Supporting Effective Educator Development). A 2011 fellow, Mitchell turned his IPad into a podcasting machine to record the stories of his students and produce them into podcasts from his classroom. Since then, he has presented his work at local and national conferences.

Last April, Shaun Mitchell joined CWP teachers, Julie Roneson (Discovery Magnet in Bridgeport) and Kelley Gordon-Minott (Stamford High School), to present “Textual, Textured, and Tech-tual Lineages: Supporting Multiliteracy Exploration for the 21st Century Classroom” in Birmingham, Alabama at the Urban Sites Conference of the National Writing Project. The Connecticut team also participated in Lessons of the Birmingham Movement: A Symposium on Youth, Activism & the Struggle for Human Rights. To prepare, the presenters read several pieces by Dr. Alfred Tatum on advocating for the textual lineages of youth that represent their cultural-historical backgrounds. After a summer of collaboration with Tatum’s writing in 2012, the teacher team realized their own textual lineages were technological and textured, as well. In order to promote Connected Learning in their classrooms, they realized, their definition of a literacy lineage needed to be updated and expanded to meet the demands of the 21st century.

In July, Shaun Mitchell was hired to share his digital work with teachers and students who attended the 2013 CWP-Fairfield ISI. The National Writing Project supported this effort by partially funding Mitchell’s technological talents. Connecticut teachers hope to advocate new tools in their classroom, but don’t always have a vision for how to make it work. Following the tremendous success of digital diva, Collette Bennett, at Womogo High School (http://usedbooksinclass.com), Mitchell re-envisioned the work he could accomplish in his own classroom. During the summer institutes Mitchell digitally mastered four podcasts:

In total, 72 young people and 12 teachers took part in CWP’s summer programs and wrote in a variety of genres. As one student attending explained, “CWP writing institutes are what schools wish they could be.” When probed to explain further, she continued, “During the school year teachers have a lot of pressure to teach to tests. Here, they were able to help us grow as individuals and writers. We explored the writing that matters to us.”

Further, 20 students from Bridgeport City Schools were offered Bank of America fellowships to attend the 2013 Young Writers’ Institutes. According to Bill Tommins, southern Connecticut market president of Bank of America, “Students who attended the Connecticut Writing Project Young Writing Institutes left equipped with valuable communications skills that helped them succeed in school and the workplace. The summer institutes were an excellent example of national programs, local schools, institutions of higher education, and the business community working together to create opportunities for young people. We are proud to be part of this fellowship and to promote literacy for life.” In addition, Senator Bob Duff secured funding from the State of Connecticut to assist the summer work. “Literacy is everything,” he explained. “Students need to be able to communicate in a variety of ways and to express themselves both creatively and professionally.”

Shaun Mitchell’s work has also grown into the 2013-2014 school, as well. Recently, he collaborated with a graduate class at Fairfield University as he assisted his high school students in an exercise of writing 10-minute plays – a genre that brought tremendous success to Crandall’s students in Louisville, Kentucky, (an influence of the Louisville Writing Project). Mitchell’s high school writers sent early drafts to Crandall’s graduate students for feedback and, in in February, the top scripts will be produced and performed by Central High School’s drama department. Mitchell and Crandall hope to create digital narrations of the work, as well.

For more information, contact Ellen Israel at cwp@fairfield.edu. CWP-Fairfield can also be followed on Twitter: @CWPFairfield (thanks to Shaun Mitchell and his ability to connect learning through digital media). Director, Bryan Ripley Crandall, can be followed, too: @BRCrandall