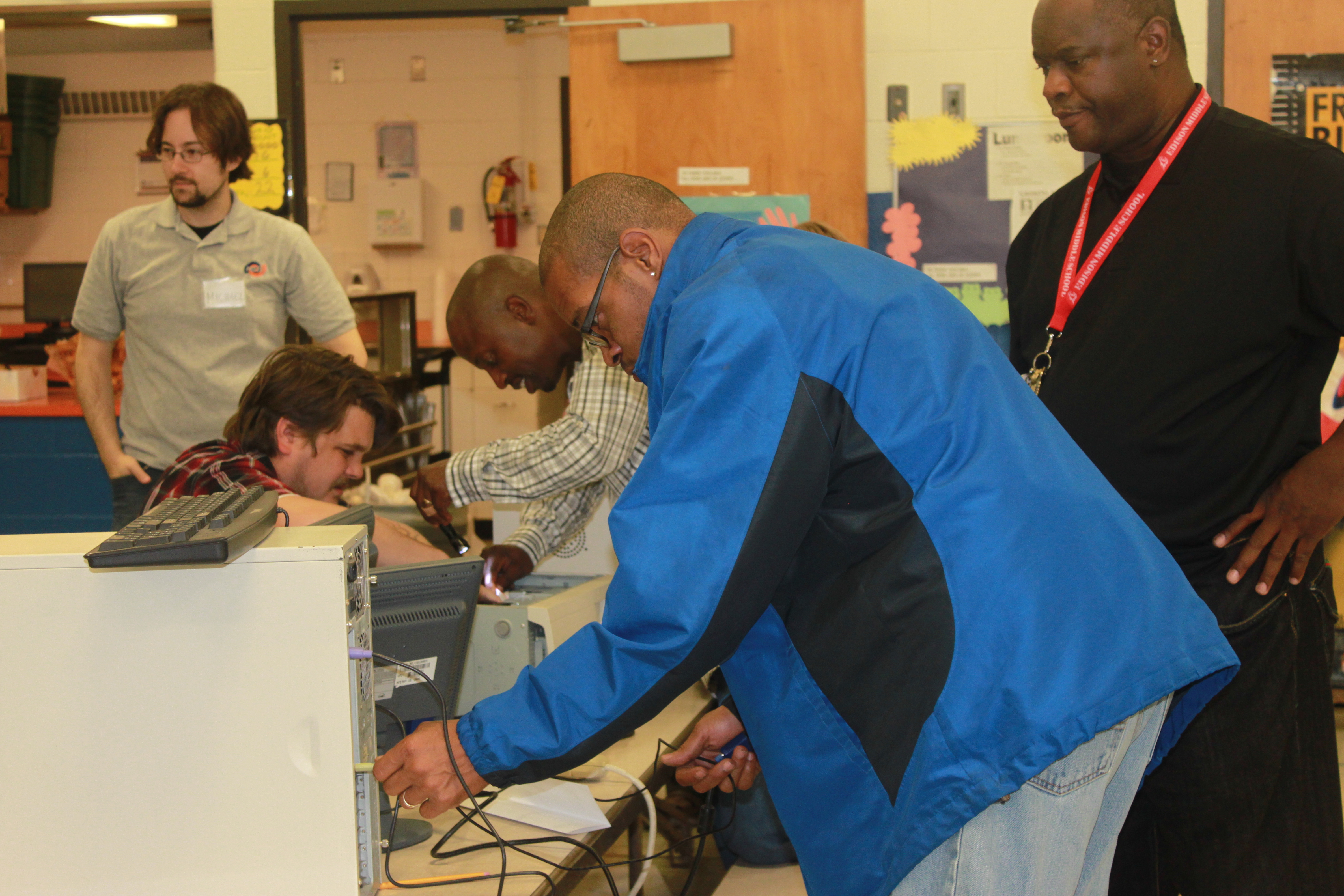 The following blog post is by Dr. Martin Wolske and appeared on his blog on June, 4.  The school refered to in paragraph two is Kenwood Elemenatary in Champaign, IL.

A bit over a decade ago, I had the privilege to help charter and be scoutmaster of a new scout troop with my sons and a few other wonderful families. We decided to especially focus on backpacking as a troop. None of us had done any serious backpacking, adults or scouts. Rather than us adults working extra hard to first learn and then teach backpacking to the scouts, we co-learned as we prepared, tried, failed, reflected and discussed, learned, prepared, tried failed less, reflected and discussed, learned … I use the term fail because we didn’t achieve our designated goal — we weren’t able to hike all the way to the designated camp site on our first trip, we had to cut another trip short, etc. But is it failure when each was a cycle of inquiry that subsequently allowed us to take on progressively more challenging hikes by developing a body of knowledge that gave us more power to work with and within nature safely and effectively?

A couple years ago I was leading a Demystifying Technology weeklong workshop with parents at an elementary school. We opened up computers, learned about the flow of a keystroke as it makes its through the parts of a computer, installed the Linux operating system, and set up the computer in a local area network together. Then we installed a tile-based programming tool called eToys that the school was using to teach basic computer science and computational thinking skills to the K-5 students. But there was a problem on most of the computers in which the images of a toy car going across the screen drawn by the opening menu of the program stayed on the screen, such that it slowly became just one trace of all that had been displayed on the screen since starting the program. When the parents asked how to fix it, I honestly said I didn’t know, and asked in return how were we going to fix it? As a group we started thinking through what might be happening, remembering back to the earlier lessons on the flow of the keystroke, looking through menus and trying various fixes, finding work arounds, and ultimately finding the actual fix, a 3D rendering problem with certain older video controllers. Never mind that most of the parents there had done very little work on any computer, and never had worked with the nuts and bolts of hardware and software. Or that none of us could give a solid explanation of what 3D rendering had to do with this particular problem.

This past week I heard a wonderful story of someone unpacking a 3-D printer in a library. She had some basic experience using one at another library, but hadn’t had to do setup and development from scratch before. Rather than working extra hard to first learn and then teach 3-D printing to teens at the library, she co-learned with the teens as together they pieced together how to work with this specific style of 3-D printer and software. Even when she knew certain aspects from previous experiences, she allowed and guided the teens to learn it themselves instead of teaching it to them.

A lifetime ago when I was a teenager my dad had an interaction with someone who was just starting a sawmill. My dad had built his own sawmill years ago and now had a newer sawmill. Yet during the conversation my dad kept asking this upstart questions of how he did things instead of telling him how my dad did it. I can remember still how mad it made me and how embarrassed I was that my dad wasn’t letting on just how much he knew. I confronted my dad right after the other guy left. Dad responded that if he had done all the telling, my dad might have missed out on a great opportunity to learn. But I also see now that the guy would have learned how my dad did things that fit my dad’s context instead of the guy getting a chance to work out by thinking out loud with my dad how to work out problems in a way that fit his context.

In Experience and Education, John Dewey talks about collateral learning. It’s learning how awful math is when we’re in a classroom in which a teacher is teaching us math using the drill and kill method. For years, I thought the learning objectives in my classes and workshops related to technology were related to the specific technology, and the collateral learning was about troubleshooting and confidence that students could approach different technology down the line. But in Democracy and Education Dewey comes to the conclusion that the means of education and goal of education are both the same … education. Education is not as a first step of accumulation that is then exchanged for something else like a job, but education is a central part of people working together in democracy to continually build community as a community. Every day we are in a process of learning if we are to adapt to the changing conditions to continue doing that which we regularly do and to achieve the many new things we want to do. Life is a process of inquiry, and we only flourish in life if we embrace and continually progress in our ability to learn.

Thinking through each of the above examples, I now wonder if the common thread is that of co-learning rather than teaching? And even more so, I wonder if the core learning objective is competency as a community of learners and if the collateral learning is the specific topic at hand, whether backpacking, or refurbishing a computer, or 3-D printing, or sawmilling?

The impact of flipping things on their end is huge. It completely changes what competencies we need to guide a workshop. Normally we seek to develop a greater level of competency with a thing — a computer, a software, a network, a robotics package, a digital sewing machine — than those in the class which we will be teaching. But I wonder if this is a crutch because we aren’t fully confident in our ability as a learner. In this flipped classroom, we instead enter with a competency in the process of learning and a designated role as the lead guide in the learning process. As lead guide we may rush ahead in the learning of something, but not so that we can teach what we just learned. Rather, to the extent that we rush ahead at all, we do so in order to know enough about the terrain to construct a safe starting point for learning to occur. Rather than asking what all I need to know to begin teaching, I ask what is the least I need to pre-learn to create an effective context for us to learn together. Progress isn’t achieved by having everyone develop proficiency in the thing, nor by separating out those who can from those who can’t. Rather, it is measured by the extent to which we as a community of learners have progressed in our ability to achieve the larger goal of which the thing we’re learning about is but a small part.

The process, learning, is the product of our class or workshop.

What do you think?

Four Score and Seven “Likes” Ago…

As you step through the doorway of a history classroom, the...
by Ariel Tyson

The Material Conditions of College: A Love Story?

It all started with a timeline....
by Meaghan Rand

Four Score and Seven “Likes” Ago…

As you step through the doorway of a history classroom, the...
by Ariel Tyson

The Material Conditions of College: A Love Story?

It all started with a timeline....
by Meaghan Rand