Making Your Own Jam Is What It Is

(This was originally posted at my blog, Kevin’s Meandering Mind)

I had a good friend in an one of my very first bands (The Roadbowlers!), and when I would bring in original songs for the three of us to play, she would always be so appreciative and receptive, even if the song sucked and fell apart (more often, than not, it turns out). Susanna was just learning to play guitar but her philosophy around music making was informed by an artist she listened to a lot and admired as an artist making her way mostly independent of the record industry, Michelle Shocked (although a controversy over some of Shocked comments that were deemed homophobic would no doubt upset my friend terribly).

My friend, Susanna, would quote this line from the song, Strawberry Jam:

Yeah, if you want the best jam
You gotta make your own
– Michelle Shocked

The line resonated for her, and later for me, because it reminds the musician that you don’t need a recording contract to make music. You don’t need a manager. It’s not about the money or the fame. What you need is something that you can play on, something to sing about, maybe a porch to sit on, and then, you make your sounds wherever you are. You make your own jam because that’s the best jam there is.

I was thinking of Susanna and her musical mantra the other day as I was reading a reply to a comment I wrote at Howard Rheingold’s post, asking us to check in as part of the Connected Courses.

I had written in my comment to him that things were going relatively smooth, even from my angle of a K-12 teacher in the midst of University folks, but expressed the wish that more of the facilitators would be more involved in social media interactions. This was not a criticism, knowing how busy folks are. It was more of an observation, and worry that the online component was seeming to replicate the classroom experience of the knowledgeable one imparting lessons (via video) as the students (us) listened.

One thing we agreed on early in our own Making Learning Connected MOOC is the concept of “no one gets left behind” — ie, no blog post or project ever sits there with no comment, and no interaction. Facilitators were active in sharing, commenting, etc. It made a huge difference to people, to know that other folks are in the mix, reading and interacting. This is not to say this is not happening. Howard, and a few others on the Connected Courses team, are doing what they can, given the feed of information flowing. I was just hoping for more. (ie, selfish me)

Howard’s response was logical: he is encouraging facilitators, who may or may not be used to social media on this scale, to dive in, and he noted, rightly, that this is the start of the fall semester for many of them, and we all know how swamped we get when things get rolling.

Then he made the comment, which has stuck with me for days. He said:

What it is, is up to us.”
– Howard Rheingold

In true Connected Learning fashion, we make the connections that matter to us and we build our networks and communities that are meaningful to who we are and where we are going. We sustain us. His small sentence reminded me again that waiting around for validation by the “teacher in the room” goes against the very grain of Connected Learning.

Thank you, Howard, for reminding me of where the learning starts. If you want the best jam, you need to make your own. 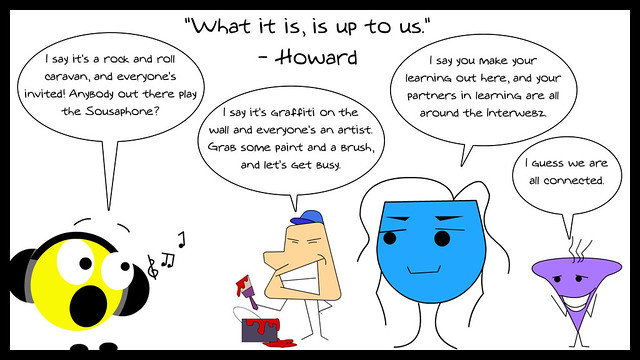