I’m past 20 now. Twenty-odd daily comics for The Wild West Adventures of the Internet Kid, an idea that was sparked by my participation in the open Western106 story adventure. I thought I would take a breather here to reflect on how it’s going for me, the writer (I make an appearance now and then in the comic, usually for criticism for not writing better comics or not paying attention to equity issues. Guilty as charged!). 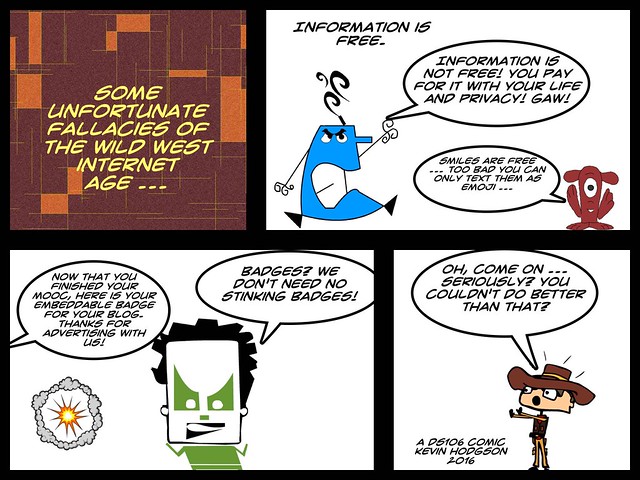 So far, so good with my idea of a daily comic, although I have very little idea if anyone is reading them. A few comments and reactions trickle in now and then. I’m still more focused on the question for myself: Am I having fun making the comics? I am and so, I keep on going forward. In fact, I have at least another 15 comics in the bank, set to go forth, including one story arc that will invite readers to play a game. I also have an ending comic, for when I get there.

The way I have been writing them is in bursts. In fact, the first weekend when I had the idea for the Internet Kid, I had a deluge of comic making. I cranked out about 15 of them in a three-day weekend, just keeping up with the ideas. I won’t claim that every comic every day is great, but I hope they add a little entertainment chuckle value for folks now and then. 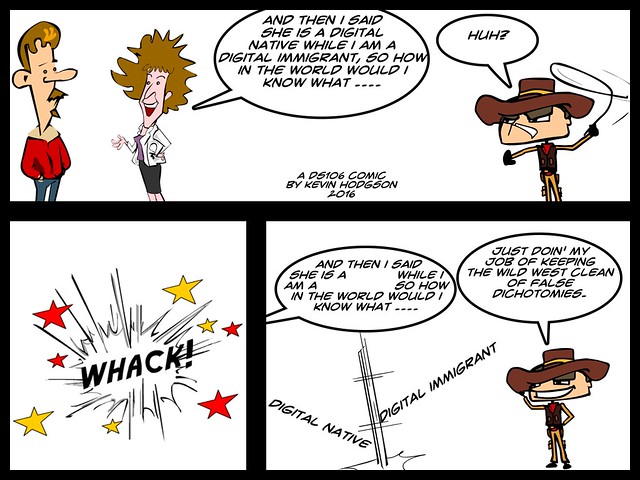 What I am really trying to with The Wild West Adventures of the Internet Kid is to combine some of the elements of the Western genre (the cowboy, the horse, the villain) with some insights into the modern culture of technology. It’s trickier than it seems to pull that off in an entertaining way. I am often trying to make fun at the stereotypes of gender, making the so-called villain — Anarchist Annie — an interesting character, or so I hope. Her goal is to poke holes in the bias of our world. Sometimes, she blows things up to make her point crystal clear. 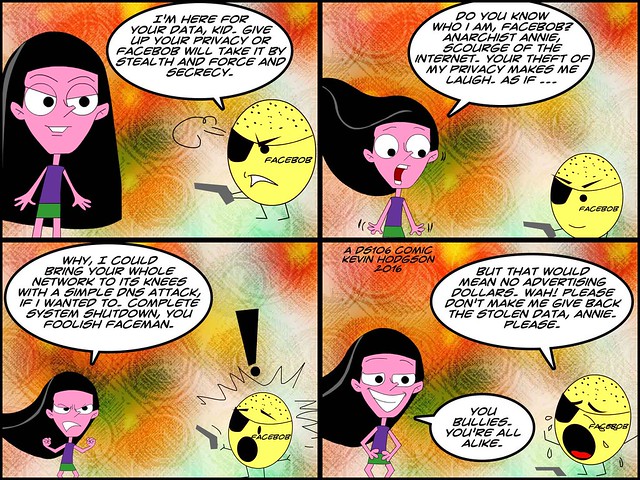 In fact, a few of the storylines and comics are pulled directly from my reading of Participatory Culture in a Networked Era, a slow-read in the Digital Writing Month community. If you have read that book (and you should), and if you read The Internet Kid (which, of course, I hope you do), you will start to see some parallels of ideas around technology and learning and young people’s interactions in the Digital Age that surfaced there in that study of participatory culture by Henry Jenkins, Mimi Ito and danah boyd, and then got woven here into this comic.

The app I used to make comics — Comics Head — has limits, particularly to expressions of characters (although an upgrade this weekend with a ton of new art seems to open the door for adding more elements .. still checking that out). But I do appreciate the flexibility of the Comics Head app for what I am doing as a comic strip writer. (And I have not yet used the Audio element on The Internet Kid … which allows you to layer in audio tracks on top of the comic .. on my list)

I am purposefully posting the comics in different places — on Twitter with the #western106 hashtag, in Flickr in an album, and on a Tumblr site that I set up just for the comics (it turns out Tumblr is a perfect space for daily comics). Sometimes, I share on Google Plus. I also have the feed of the Tumblr site spilling into the DS106 course. I wonder if anyone else other than me uses an RSS Reader to peruse the posts going there and make comments?

Can I just give a shout-out to my favorite character in my comic?

He refuses to let The Kid ride him and the Horse even negotiates an agreement with the Kid on this matter (The Kid agrees but worries what other cowboys will think of him). Yet, the Horse with No Name remains a funny and insightful sidekick to The Kid.

I think, as the writer, I am the Horse with No Name more than I am The Internet Kid. (Maybe I have some Anarchist Annie in me, too.) This particular comic of the animals having a farmyard chat about The Kid, in particular, still makes me giggle. I love how the Horse has the tablet and the image of The Kid on it. Look at The Kid’s posture and expression. Priceless. We know who is really in charge of their partnership. 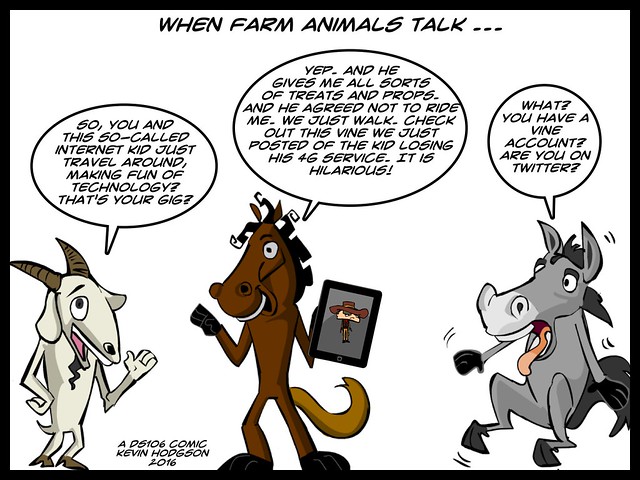