As the immigration reform bill begins to consume lawmakers in Washington in the coming months, students around the country had a head start to debate the issue online. Sen. Chuck Schumer (D-N.Y.), the lead Democratic negotiator, explains, “The American people have told us to do two things. One, prevent future flows of illegal immigration, and then come up with a common sense solution for legal immigration. And that’s what our bill does.”

The bill also makes changes to how foreigners can legally immigrate to the United States going forward. These changes are intended to make the process easier. However, only immigrants who came to the country before Dec. 31, 2011 can apply. To read more about the bill, you can visit to the KQED Do Now #75 prompt.

In Coppell, Texas, students at New Tech High @ Coppell overwhelmingly took over the debate last week in our weekly Do Now discussion. Educators Janelle Bence and Danae Boyd presented the activity to over 136 learners who all made compelling arguments about the issue. The majority of the conversation happened in the comments section of the KQED Do Now blog post. But, students also tweeted rich media that they produced, which consisted mostly of documentary and poetic videos about immigration.

This work is fueled by a collaboration between KQED and the National Writing Project where Ms. Bence is one of six NWP teachers who are working with KQED’s News Education site, The Lowdown, to develop educator guides on topical issues like immigration reform. These guides utilize some of the great resources on The Lowdown and provide educators with an overview of how to assign a media project on each of the topics. The student work then gets tweeted during the week of a Do Now that matches the topic. To learn more about the media assignments that the Rookies from New Tech High @ Coppell, you can visit KQED’s The Lowdown for the entire educator guide to assign similar projects.

Below is a compelling short documentary video produced some of the students in Ms. Bence’s class. It looks at immigration through the lens of three immigrants who tell the reasons why they left their country of origin, why the issue impacts them, and how they see their future living in the U.S. One of the perspectives is from a young boy whose mother was deported back to her homeland. He discusses how that traumatic event affected him.

Students also wrote poems about immigration and turned them into videos that uploaded to YouTube and linked in their tweets. Here’s one called “On a National Level.”

Freshman students, referred to at the school as Rookies, participated both in class and outside of school pretty much nonstop throughout the week which resulted in about 500 comments. One of the more interesting threads was from Scott_C_1 whose comment was referred to as “borderline racist.” And then there was series of back and forth that helped the commenter to gain an understanding to how people took offense to the way he articulated his point. Here’s part of the thread. Click on the image to read more.

The discourse presented a wide spectrum of ideas, focusing on issues like the amount of time one must wait in order to be a citizen, border security, the possible threat of available jobs for citizens, immigration rights, and general approval or dismissal of the bill as it stands now.

Ms. Bence expressed a concern that, “many of [the learners] simply inherit the views of their parents—- not purposefully. That’s all they are exposed to prior to spending time like this on relevant topics. Our goal is to show them as many perspectives as possible to become more informed. Here is one of my favorite reflections from Jackson Stone. It shows great open mindedness and the importance to doing work like this. Jackson also expressed the significance of being able to reflect upon his learning. He didn’t realize until completing this reflection journal how much he had learned.

‘Going in to this project I was completely against immigration. I thought that we have plenty of people here already, therefor no need for more. In addition I can admit to some discrimination to our neighbors down south. After this project I feel that I have done a complete 180. I want hard working dedicated citizens to come to America.'”

Below is an excellent assignment prompt that Ms. Bence and Ms. Boyd created for the activity for students to engage in a thoughtful conversation.

Also, Ms. Bence and Ms. Boyd came up with a thorough rubric for the assignment. Below, you can the first page of the two page document, and if you are interested either using it or adapting it, feel free to copy it to your Google Drive account.

The guiding questions were:

Below are are annotations of that discussion for one period: 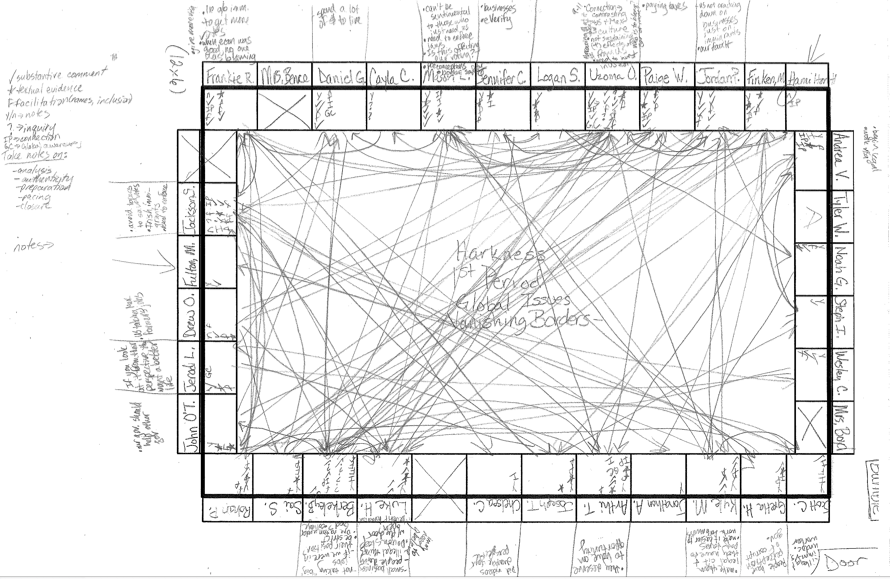 Students also had the time to reflect on the week-long debate. Here are some of their comments:

“For project immigration, some of our best background research was done through the DO NOW discussion. I really liked how we read an article and contributed to the discussion to better enhance our understanding. However I did not like how many of the comments did not have much we could bounce off of, which made commenting and continuing the discussion difficult at times.”—Samantha Finglass

“For kids our age, it is much easier to speak through text instead of in person and face-to-face. Because the DO NOW discussion was through text, the learners had to research a lot and post very intellectual responses to each other and the article. The learners had to be prepared to defend their statement because other learners were not afraid to post their opinion to make other posts look silly and not factual. The DO NOW discussion should happen again. It is important that young students learn the importance of voicing factual opinions. I learned a lot through the DO NOW discussion.” —Luke Heaton

“I really liked the DO NOW discussion. I thought it was cool had we could interact with people outside of our class, on a topic that we had grown an understanding to. I think it would be good if we had another DO NOW discussion.” —Jaime Arthur

“I like the DO NOW discussion because it gave us the opportunity to communicate with other students in the United States. By doing this, our knowledge increases and we get to see the points of views from someone who we don’t see day to day.” —Maddie Campbell

“I really enjoyed getting to explore a topic through communication with people we don’t even know, to get a better understanding and become part of the real world through our schoolwork. I found it interesting reading other people’s comments on the topic and seeing the similar and opposing views while being opened minded and thoughtful on the subject at hand. I don’t think I particularly liked going through all 300 comments, so I skipped around a bit after awhile, but still enjoyed looking at what people had to say at the same time. To improve the experience, keeping an open mind on things would be best so as to not start any arguments or offend anyone. Making sure everyone is aware of this is important to keep things respectful and still a great learning experience. I think that this is an awesome chance to explore topics through communication and technology and wouldn’t mind doing more of these in the future.” — Olivia Carlson

When Walking the World

I know there are a few more learning events for Walk My World (including the...
by Kevin Hodgson

via http://van-life.net/ I don't know what to make o...
by Kevin Hodgson
See All Posts
Collection