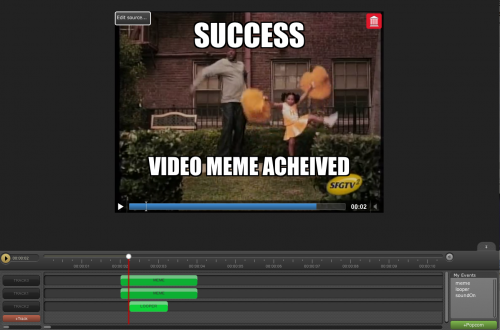 A couple years ago the Popcorn team of the time set out to involve youth filmmakers in beta-testing the first version of Popcorn Maker. They called their experiment “Storycamp” and the very first version resulted in new features for the software.

the Popcorn Maker interface back in 2012

A year later, during the Summer Code Party in 2012, a small group of us took the initial materials created for Storycamp and developed them out into a full fledged, six week learning program. Each week had a different theme, and there was a project that threaded through the entire course.

Afterwards, we did a post-mortem on the program:

About 6 months later, at the end of 2012 and the beginning of 2013, I had redesigned the educational structure of Storycamp to reflect the underpinnings of what is now the Teaching Kits. I envisioned a new model for curriculum, modular enough that any one could change programs and plans by swapping out activities. I wanted people to be able to run a single session or even the entire program in any order – without being tied down to the curricular design I’d set. The idea was to structure them in a way that made it easy to remix and customize the curriculum for various audiences. I wanted to remove the contingencies of prerequisite knowledge as much as possible and help people be creative with their teaching, as well as their learning.

This was before we had built in the “Remix” Everything button into all our tools, so I built the curriculum in HTML/CSS and posted it all at the HiveNYC.org website. We then ran Storycamp 2.0 for the Hive Learning Network in NYC. We wanted to get the tools into the hands of more educators and help them use them, but I was looking at the model and whether or not it could work on a larger scale. I was asking if we could, in fact, make Open Educational Resources that are truly remixable, and it turns out that we can.

The new model was successful, so we decided to take my prototypes and build them out into what are now the Teaching Kits located at Webmaker.org/teach. We worked to redesign my original templates, build in features that would allow us to tag and search content, and promote the idea of remixable curriculum. We launched the Teaching Kits in the summer of this year, and it seems like folks are liking the structure.

But what about all that content? We had the model formulated in a way that anyone could use it, but we still had loads of content that hadn’t been fed into the new designs. It took some time (mainly because there’s always 1001 things happening in the Mozilla universe), but I was finally able to update and remake ALL the Storycamp resources using the remixable teaching kits. Now, they’re open and ready for any one to take and remix.

I’m really proud to show you the new and improved Storycamp curriculum. I made a Meta-Kit so you could have all of Storycamp in one place. The “Agenda” links out to the other kits. I also made loads of new resources, and everything is linked from this page.

the Header for all the Storycamp kits

If you find something funny, or have ideas for improvement, please don’t hesitate to reach out!