When Assignments Become Jobs: The Power of Meaningful Work

When Jordan enters her Broadcast Media class at Kenilworth Junior High School, she doesn’t wait for directions from her teacher. She checks the job board, grabs a laptop and heads to her table to confer with her partner, Kyle. They are anchoring today’s news show, so they will spend the first part of class writing their script. They pull up the class website and navigate to a spreadsheet of announcements submitted by school staff members. They work together on a shared Google doc (also from the website) and coordinate with the weather and sports teams so they can incorporate their reports into their script.

In addition to Jordan and Kyle, there are 31 more seventh and eighth grade students in the class, all assigned jobs in the production of KTV, their school’s daily news broadcast.

From the time the first bell rings until the producer quiets the class for filming, the KTV room is abuzz with activity. Students move with authority around the room (and across campus), each responsible for elements of genuine broadcast media work. The stakes are high, as the scripts they write, the graphics they design or the movies they edit are not merely “turned in” to a teacher, but are published to a wide and meaningful audience.

Our students know that the next day, during their morning class, they will watch this episode of KTV, surrounded by their peers. That audience alone is significant enough to motivate 12 and 13-year-olds to do the best work they can. But the audience for our students’ work extends well beyond the walls of our classroom — parents and community members also stays up-to-date on school news by accessing KTV from the front page of the school website.

Far more meaningful than grades, the daily publication of the KTV students’ efforts provides a steady stream of feedback, affirmation and ownership, while also strengthening their ability to work in a self-directed environment. The work they do on any given day in the KTV studio is informed by their previous work, as the class critiques the published episodes, discusses what worked and what didn’t, and moves on to the next episode with specific plans for improvement. In addition to building academic skills such as writing, proofreading, presenting and speaking, KTV students practice professional broadcast skills, such as media production and behind-the-scenes technology. And woven through all of their work are skills critical to our professional and personal lives: collaboration, communication, creativity, critical thinking, responsibility, flexibility, and the problem-solving prowess that comes from working under pressure to produce a daily news show in a room full of people and unreliable technology.

In the final half hour of class, Jordan and Kyle wear the official KTV News Team shirts, sit at the anchor desk in the studio, and run through their lines while the teleprompter team paces the script. The producer rounds up the tech team and directors, and checks in with the floor manager to make sure the tricaster and bus tech have coordinated the show’s chronology. She quiets the room for filming and the show is now in the hands of the tech team, anchors and directors. When the show is over, the class applauds and then starts putting away the equipment, while the tech team uploads the show to YouTube and Twitter. Another episode is in the can; just another day in the studio for these kids. 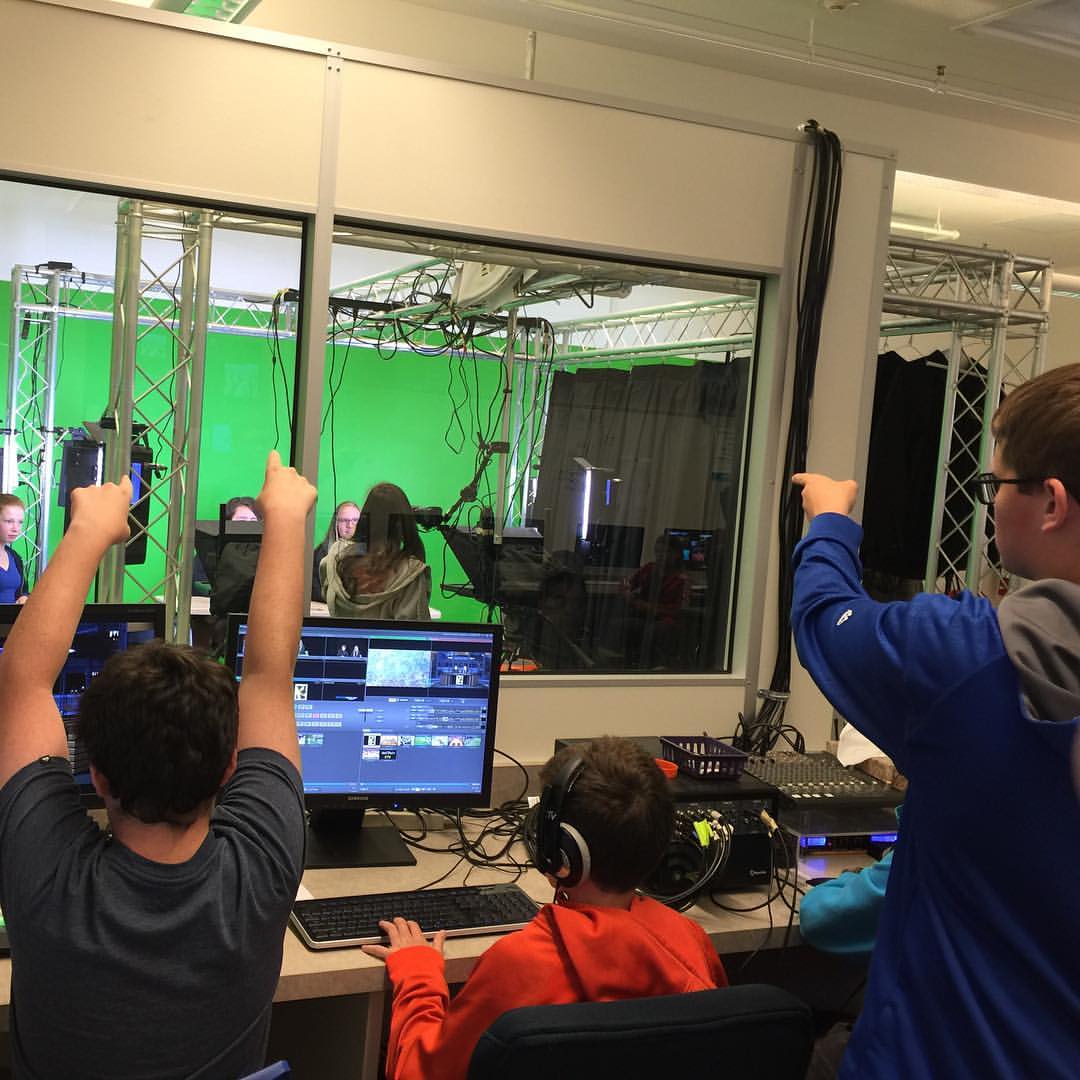 After teaching English for 20 years, taking on the broadcast media class has opened my eyes to the power of giving students jobs with clearly defined responsibilities, meaningful motivation, and wide publication to a significant audience. And it makes me wonder: What if our traditional academic classes looked like this? What if in an English class, my students were given jobs that writers and literary critics tackle in their professional roles? And what if those jobs resulted in frequent publication to a meaningful audience? What about math classes? Can they look more like the workplaces of mathematicians and engineers?

We’ve all heard the favorite student complaint disguised as a question: “When am I ever going to use this in the real world?” Annoying, yes, but a fair question. What if their classes really did operate like the real world? What if students were given jobs instead of assignments and could easily see how the skills they were learning were relevant to real-world work? This teacher is convinced: The real-world question is valid, and we owe our students more than an answer; we owe them authentic, real-world learning opportunities.