We Want Our City Back 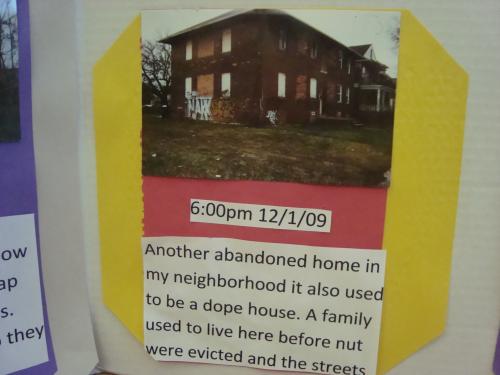 “We Want Our City Back” was an event that grew out of the discussions we had about the way national and local media portrayed Detroit, students overwhelmingly felt that coverage was biased and that individuals named as heroes in Time magazine were not enough.

With this in mind, we decided to ask them what they thought the city needed, and based upon their responses, created focus groups for assigned photojournalism projects:

1. Raise Your Voice- a group attempting to combat negative “images” of the city via the media in print, photographs, discussions

2. Crime Fighters-Group looked at violence and other issues that students viewed as a crime, such as having a lack of health care, not having access to grocery stores within their neighborhood, or when faced with an emergency- having no emergency responders or a delayed response

3. Power in the City-Students presented both scandal and abuses of power, authority and trust, as well as ways that they thought power in the city could be redistributed.

Once students completed their photojournalism projects, they arranged them on boards for presentations, created resource binders to educate others about their issue, and brought these resources with them to a summit, where they interacted with invited speakers around the issues at hand.