In production, students go out and shoot the script. A production crew consists of a director, camera person, one or more actors, and a “marker”– a person who documents on a dry erase board what scene, shot, and take the crew is on and displays it in front of the camera before each shot. 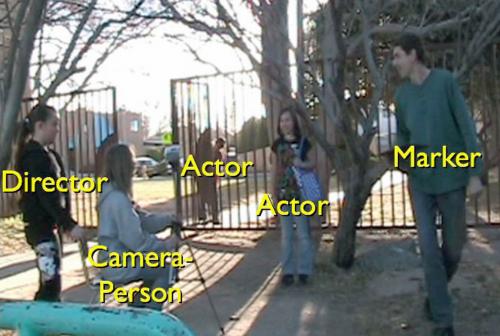 After a location is settled on, the director positions the actors and gives them direction as well as their lines. Too often this is the first time the actors have seen the script but this trend is changing as directors, tired of acting that sounds like reading, are now giving scripts to the actors to take home and study. Meanwhile, the camera person gets in position and deals with any issues that might come up such as backlighting or awkward actor positioning.

There is a lot of negotiating that happens in this stage. It can look quite chaotic– actors goof off while waiting, everyone’s got a suggestion, lots of laughing happens after people mess up. Setting up a shot disproportionately takes up a great deal of time. A take that lasts 10 seconds often requires 10 minutes of setup time. As a result, multiple takes are encouraged, even for takes that seem quite good. “One more time, just in case.”

Technically, the director is in charge of the direction of the shooting as well as the crew but everyone contributes often outside their designated roles. An actor may have co-written the script and is in a good position to comment on the direction. In the first two years of the club, I would discourage this feedback thinking that it was a kind of “micromanagement” by scriptwriters or “back seat driving” by actors but I’ve started to see the importance of this dialogue. Its critical feedback, real input that changes the outcome of the final product. Some directors are quite firm in what they want while others are more wishy-washy. Their directing style ultimately doesn’t matter as long as the shooting goes smooth (socially) and the crew stays productive. Directors should definitely have focus or a sense of direction but how they communicate with their crew is exceptionally important and may be the biggest determinant of how productive, creative, and happy the production team is.

“I need someone to be the victim.” Laughter ec...
by Christopher Working
See All Posts
Collection