Nearly all of our student productions are narratives so they all start with a script. The script is written using one of two styles, an “Audio-Visual” (AV) format or a standard screenplay format. 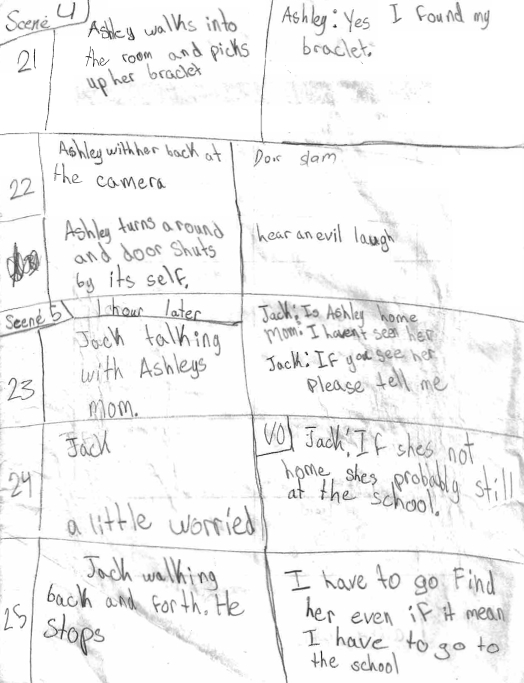 Beginning scriptwriters often start with handwritten scripts using the AV format (above) and a few films are even shot from these documents. The shot by shot, “what-you-see” and “what-you-hear” format is very clear and works well for short videos (less than seven shots total). While not frowned upon, AV scripts aren’t very good for longer narratives. They are difficult to follow and shooting video from them can be restrictive for a director since the shots are already spelled out for them.

Students quickly discover that writing scripts in standard screenplay format is not only more efficient and flexible but more fun. Writing in pairs and trios on the computer, students use an open source media production and word processing program called “Celtx” http://celtx.com [a screen capture of Celtx can be viewed above]. Celtx is surprisingly kid friendly but some knowledge of scriptwriting is beneficial.

[Note: One night on the internet should get any writing teacher properly prepped on screenwriting. Go to http://www.simplyscripts.com and search for a movie you’ve seen or enjoyed. You will quickly see how the script is an efficient plan for the film.]

Celtx incorporates pull down menus that automatically format text to standard scriptwriting categories such as “Scene Heading,” “Action,” “Character,” “Dialog” and more. Students quickly learn to use the program to efficiently construct a script that any director– from a pro like Steven Spielberg to one of our fourth graders with a scab on her knee– can make sense of and shoot.

Once a script is complete, there are other pre-production tasks that need to be completed. The scriptwriters are encouraged by me to first find a director and let this person carefully put together their crew. Sometimes they follow this procedure but I’ve discovered that students, especially at the beginning, prefer to go about assembling their crew in a much more loose manner: “Who wants to be camera?” “I do!” Ability is rarely factored into these decisions and I personally find it both alarming and refreshing. As the club gets more experience and the stakes rise (ex. dealing with a long, interesting script), the kids do begin to fill roles such as director and principle actors more carefully.

Next, the script must be scanned for any necessary props; they need to be brought from home or made on the spot. All kinds of questions need to be answered: How exactly will that driving scene be shot? Do we need an actual car? Locations for filming need to be secured, permissions granted. Will the school library be free or will there be a meeting there? Pre-production usually ends when the urge to actually film gets too great. The “low hanging fruit” philosophy– lets get these easy shots first and we’ll worry about the rest later– propels the students into action.

When all the positions are filled and pre-production tasks are nearing completion, a critical detail must be done: the director has to make a plan on how to shoot the script. The club has gradually developed a process for approaching this task. In the beginning kids “winged it” and needless to say, it is not recommended. The director would go out with the crew and pretty much start shooting from the beginning of the script. Overwhelmed and confused, crews would come back without much to show for their time. In addition, it was impossible to shoot anything out of order of the script so any obstacles (and there are LOTS of them in video production) grounded the crew.

A new technique developed which we call “blocking”– carving out and marking specific shots from “blocks” of text from the actual screenplay [Script Blocking.pdf]. Directors usually block one scene and then shoot it, returning to the script to block the next logical one to shoot. Blocking helps kids focus on one task at a time and to create an efficient shooting schedule– if a needed actor is absent, the crew can still shoot a different scene. Even after the script is blocked, the realities of the location often require additional changes on the fly (so clips like “Shot 6.1”– between shot 6 and 7– are common).

Our next step in the evolution of script preparation is the creation of a “shooting script”– a script with shot numbers listed on the side. As you might image, this is how it is done in the “big leagues” and it was only a matter of time that we got to this stage.
Open Script Blocking_0.pdf

“I need someone to be the victim.” Laughter ec...
by Christopher Working
See All Posts
Collection