In my personal opinion, there is nothing better than a Mac when it comes to working with video. But Apple products were hard to come by in our PC-dominated district. Once the principal was onboard with the idea of the project, he called in the district technology director to help work out some of the logistics. Being in a small county suddenly played to my advantage, and I was asked questions that I never expected to hear: “What do you need to do this? If you had your realistic dream setup, what would it be?”

“Done.” As a bonus, they even tossed in two copies of Final Cut Studio, a delightfully complicated software toolset.

I also needed a converter to run the lines from the computer into standard AV lines so it could be plugged into our school’s networked television system for broadcast.

In addition to the technology, I wanted a set and some lighting. It is amazing how easily a set can be made by simply building a wooden frame and tacking on some cheap, white bed sheets. The lighting was a little more complicated and took some time to figure out.

The early lighting setup was comprised of a series of leaning floor
lamps. It was time-consuming and challenging to get the lighting to
behave in the way we wanted, especially since it was decided that using
rear projection onto our background would be a fun element. As a result,
many of the early videos were very dark. 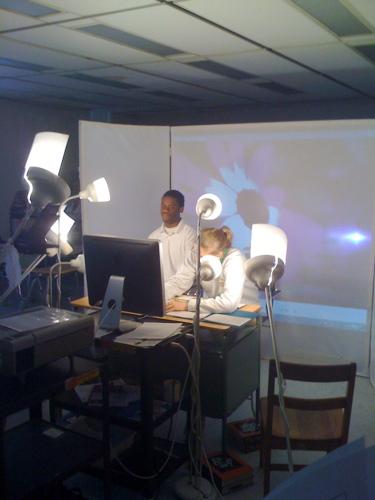 Eventually, we used four simple clamp lights found at the hardware store
and covered them with kitchen wax paper and mounted up to a simple
wooden frame.

To make our daily setup even easier, we creating a lighting rig by mounting some of the extra wood from our background build to the backside of the overhead projector cart we were using as a computer stand.

In hindsight, we could have done this project on a much tighter budget by using existing computers in the school and free Microsoft MovieMaker. We also could have used a simple $20 webcam/mic combo, but some production value would have been sacrificed. And why go small scale when you have the opportunity to go big?

Innovation Hour Event and some Reflection