Lieberman and Friedrich note that while teacher leaders often working behind-the-scenes they also “stay true to their principles and stand up for what they believe.”

In this study, all of the teachers are taking a stand by being public in the ways they present themselves, their work and the work of their students and colleagues. In my interview with Bud, drawing upon his past experience as a journalist, he spoke about this sometimes more subtle form of action and advocacy by acknowledging the agenda he is setting through what he chooses to post and what he doesn’t. He also spoke about his intention to be aware and reflective as possible about the choices he is making. 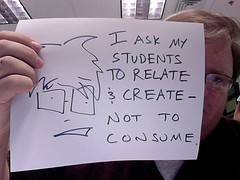 Chad spoke about his intentions online too. During the course of this study, the tweets he posted were written in a way that was meant to publicly respond to other bloggers and policymakers about his beliefs and to build, over time, a clear set of arguments for his thoughts, his reasons and as well visions of change and possibilities. And this was done in the communities of practice in which he is connected, including Cooperative Catalyst and the National Writing Project. In this way we see him enacting his “permission to speak” philosophy as he extends himself to speak directly and consistently about these matters within a community of peers and educational stakeholders.

Also, in the course of this study, Chad, along with others from Coop Catalyst, started up and participated in the #occupyedu campaign. A set of example tweets by @chadsansing related to this work and campaign include:

NOT WORKING bit.ly/q1Gn5Q @joe_bower shares news of a schl that links privileges to scores; this happens w/o cards #occupyedu #ows

reading “Time to Start Thinking Differently” bit.ly/qR4tdS & hoping for schools that are willing to stop being schools

stand against the standardization of children & schools: #occupyedu bit.ly/pmhsBV a new space for sharing OUR story #occupywallstreet

revisiting “Children can educate themselves without the control of adults” bit.ly/otzkSl via @InnovativeEdu; still much to ponder

This campaign was not just an online campaign but a call for the enactment of a core set of practices in ones own classroom. In Chad’s post “Occupy your Classroom” on October 4, 2011, he writes:

If you would occupy your statehouse to keep your job, pay, and benefits, please also consider occupying your classroom.

Chad then used forums like his own blog Classroots.org, Coop Catalyst as well as #engchat, TTT and NWP Digital Is to share reflections, questions and thoughts as he and his students do the complex work of building the classroom and school environments they want to see.