Step 2: Reading and Mapping the Text

After studying the genre of RSA Animate videos, we dived into our textbook discussion of the Louisiana Purchase. The first work they did was to simply read the pages in the textbook. I made them put their notebooks and pens away so that they could not take any notes as they read. The reason for this was that I wanted they to get the whole picture first, instead of picking it apart and re-writing everything that they read.

Next they made ten “steps” as in a staircase, and placed one point on each step. Each step had to connect to the one prior to it. They were able to have no more than ten, no less than nine. This was not random, I did this beforehand and determined that based on what they read, 10 was the appropriate number. When a kid asked if they could have 14, I knew they were watering something down, and if they asked if they could have 6 I knew they were missing a point in the story. By having ten I actually somewhat dictating what they would write without them knowing it. 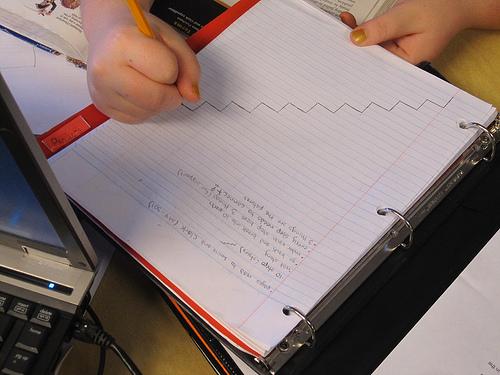 Under each step I asked them to place three facts supporting their “step”. We talked about how without support the steps would collapse, and without connecting them a listener would “fall through” and not get the story straight. They had to label each step before writing the supports, and needed to support each step with at least three things. At this point after reading the story, creating the steps, and then evaluating which facts to use for support, they had processed the information three times. As I listened to them trying to figure out which facts to use, I could hear them making decisions based on what happened in prior steps, and what was needed to make the next step make sense. I was excited that they were starting to make connections.