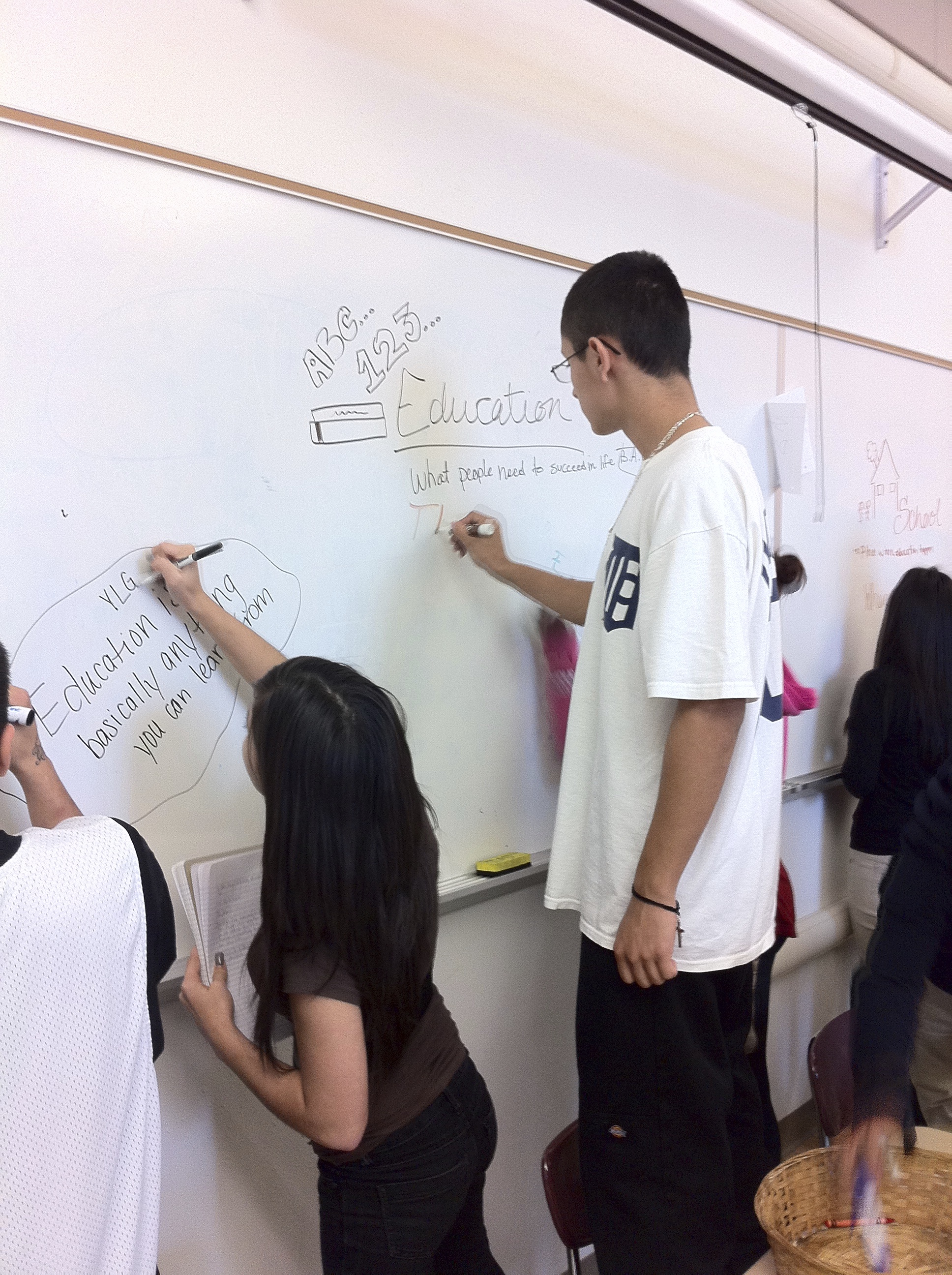 “You know I learned a lot through the projects we worked together on in this class… some of what I learned is that the media and schools look down on people in the ghetto…immigrants, people who are broke, people who do drugs.  I mean, I fit a lot of these categories, but I don’t have multiple personalities. Like- I chill with people who smoke weed, people who are gangbangers, and I help kids at Holy Redeemer with their prayers.  I can’t say either of these people aren’t me.  Nobody is the same way all the time, miss.  People are so diverse if you get to know them… And everyone cares about something.  You just gotta find out what it is, and um… you might need other people to help you figure that out.”

Connected Learning: An Agenda For Research and Design  describes learning that is “part of purposeful activity and inquiry, embedded in meaningful relationships and practices, as engaging and resilient.” Roberto, a student in one of my 11th grade English classes two years ago in Detroit, provides a compelling reflection above that speaks to the power of cultivating what the report names shared purpose, and I refer to his story throughout the following paragraphs to illuminate how important this concept is for non-dominant youth in particular. Far too often, this group of young people feel that their plights and their futures are of no concern- that they exist, in many ways, beyond love (Dixon 2012).

Given this, it seems important that we listen with intent to the purposes and interests that matter most to students, and make pedagogical decisions that support these. Schooling should be a humanizing process. I contend that those who take this stance achieve much more then preparing students for unknown futures that may or may not include college, a steady job, and the like.  Rather, they are equipping youth to be more critical, confident, and resourceful human beings in the present. In this way, they are addressing issues of equity that significantly impact young people in their everyday contexts, nourishing outcomes such as resistance and resilience. They build interconnected relationships which youth can leverage to create new pathways to opportunity and healing in communities that need it the most.

Take Roberto, for instance, who demonstrates above an sophisticated awareness of how institutions like school undermine important parts of who he is, “the media and schools look down on people in the ghetto..immigrants, people who are broke…”  While Roberto personally identified with each of these categories, he resisted the fragmentation that dominant ideological formations (Fairclough, 2010) inevitably imposed upon his identity, “I chill with people who smoke weed…(and) I help kids at Holy Redeemer with their prayers.  I can’t say either of these people aren’t me.” For Roberto, investing in a shared purpose that focused in part on civic engagement initiatives helped him cope with and speak back to an onslaught of distressing messages that vilified important components of his and his peers’ identity. It helped him piece together a full self, a person he could be confident in. In our classroom, he could practice wearing this self with others, investigate what he cared about in his own social and cultural context, and maintain vulnerability, “…everyone cares about something.  You just gotta find out what it is, and um… you might need other people to help you figure that out.” It prepared him, to interact within his community as a powerful creator, thinker, and civic actor.

Like many of his peers, Roberto tended not to commit to more traditional academic outcomes that the school district mandated. He refused to finish any administered exam, never turned in homework, and barely passed his classes. However, he was not a disengaged student.

Roberto demonstrated a notable amount of resilience when he was presented with tasks he deemed meaningful. For example, he worked diligently on collaborations centered on media production and especially enjoyed history; whenever we engaged in dialogue or debate aloud he would offer a historical perspective or provide rich metaphorical examples that appealed to students’ local understandings and knowledge base.  When I assigned his group to capture shots of the neighborhood surrounding our school, he walked into the Mexican bakery on the corner and interviewed a group of elderly women about their opinions of the festive artwork hanging on the walls, later spending hours editing the footage into a short documentary. When adult community members visited the classroom second semester to help with student research projects, it was not unusual for him to initiate casual conversation about a topic that interested him or engage in a bit of verbal sparring to showcase his linguistic prowess. Provided with the right supports, Roberto could translate this knowledge into pathways of opportunity.

One of the most important supports he could receive was guidance and mentoring from his peers and caring adults. Perhaps more than anything else, the experience of exploring and shaping a critical shared purpose with others served as an impetus for participation, providing unprecedented opportunities for Roberto to engage in critical self-reflection and agency. As I saw it then, rather than approaching him as an academically deficient young person, it seemed more appropriate to create an environment that mobilized his assets alongside his surrounding community’s (Moll 1992), creating inroads for cross-generational, cross-cultural relationships to flourish around the interests and goals deriving from such. From here, we could determine together the best ways to connect interests and social engagements with academic studies, and decide what activities would be useful and relevant in our own contexts. Yes, this was messy work. Immediate quantitative outcomes were difficult to measure, if not impossible. It was necessary labor if we were to align ourselves with the need to “address the overall health of communities and learning writ large, centering our values on equity, full participation, and collective contribution” (Ito et al., 2013).

Roberto’s engagements help us imagine what some of this might look like, but there are also other insightful and deeply committed educators who are thinking about shared purpose in unique and valuable ways, both in formal and informal educational contexts. In this section, we hear from three of them:  Jennifer Woollven shares a very honest account that bears witness to the victories and struggles she encountered while trying to figure out what exactly shared purpose is and should do. Robert River-Amezola discusses how his work with 4th grade ELL students on a service learning project created new opportunities for students to take on leadership roles and improve language skills. Finally, Bryce Anderson-Small articulates the transformation that Detroit youth underwent as they participated in both media deconstruction and media production activities through his organization, HERU.

In each of these narratives, we are given snapshots of youth who thrive when surrounded by people who support them in pursuing their own interests and passions, which may be very different from what districts, states or teachers impose. Outcomes like resistance, resilience, and interconnected relationships may not be found in standards documents, but they matter for the life trajectories of youth like Roberto.  Shared purpose, then is perhaps one of the most urgent aspects of the Connected Learning framework, in that the relationships that drive it are essential for motivation, and in turn-  feeling and experiencing love in the classroom.