Opening the classroom door and going public with teaching

Lieberman and Friedrich write that “sharing one’s teaching, and the successes of one’s students, serves as a powerful mode of teacher leadership.” They write that “going public with teaching means sharing one’s own practice and inviting colleagues to share.”

The work I have been researching is intentionally public. And the teachers I interviewed are intentional about their public participation too. Bud, for instance, when introducing himself during our interview said, “I have been online in various forms and fashion intentionally for six years now …” and Chad followed by saying I’ve been “back into blogging and tweeting with more of a purpose, or more of a perspective, at least.”

This principle of opening the classroom door and going public with teaching was a shared practice and intention of all the teacher leaders I followed. Both in the ways they are public with their work as well as in how they encourage colleagues by creating spaces and opportunities for them to share too.

Paul Allison, who founded and facilitates a weekly and participatory online show called Teachers Teaching Teachers says that this show

Lacy also talks about the potential of the public nature of the work in “making visible the really hard parts of writing and hard parts of teaching.” Meenoo too talked about the “generosity and curiosity” of teacher leaders she follows in public spaces online and how important it is for her own practice that these teachers “are constantly trying to find new questions and new answers and they are generous in sharing [their] thinking process.”

Chad remarked that he is “really interested in making places … where everyone feels safe talking to one another about the problems in public education … and then the solutions or needs that they need [filled] from public education ….” Chad is part of a cooperative weblog called Cooperative Catalyst whose tagline is “Changing Education as We Speak” and during the course of this study, members of the Cooperative Catalyst including Chad, set up the #occupyedu campaign in solidarity with #occupywallstreet.

Children, parents, educators, community members – all are invited. We cannot re-imagine or recapture schools without the stakeholders they serve 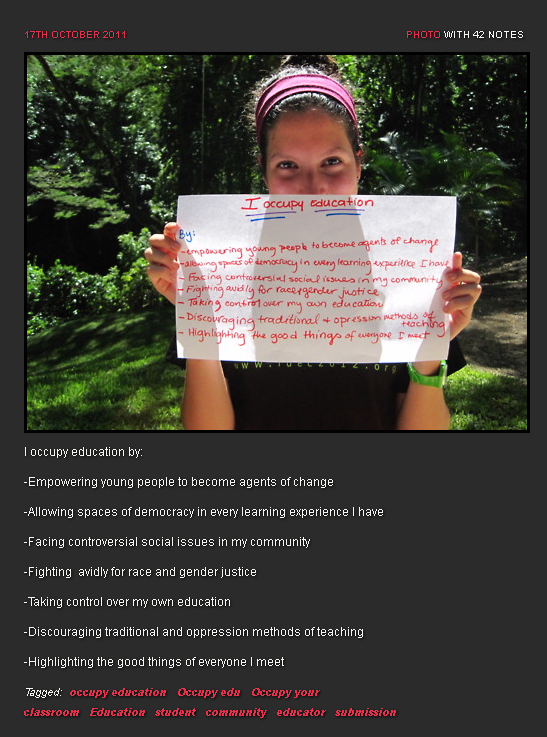 Anyone who considers themselves a stakeholder is encouraged at #occupyedu to share their “powerful stories of learning” on twitter or the weblog while also posting a picture of themselves or with an accompanying message about education. (This was modeled on the MoveOn.org campaign “A Virtual March on Wall Street”).

Several years prior to this research, Paul had established the Teachers Teaching Teachers (TTT) forum as place for teachers to share their “staff room conversation” in public and open ways. The TTT show has now happened weekly since it’s beginning in 2006 and has well over 200+ shows in it’s archive. Throughout the period of my research then, Paul continued to tweet weekly invitations for teachers to join TTT along with the list of guests and topics for the week, posting reminders and updates, and then linking to the archive of the show for download afterwards. Teachers can join during the show via video and/or chat.

Youth Voices too, a youth social-networking site related to TTT,  was founded prior to this research in 2003 by Paul and some writing project colleagues. Youth Voices is a school-based network that invites teachers and students to engage around youth interests and passions. During the course of my research, Paul tweeted links to youth writing from Youth Voices asking for others to respond or support students in thinking about the next steps of their interests or inquiries. All of this work is public and open. The website explains more about the intention behind the work while also inviting other teachers and youth to participate and collaborate:

We have found that there are many advantages to bringing students together in one site that lives beyond any particular class. It’s easier for individual students to read and write about their own passions, to connect with other students, comment on each others work, and create multimedia posts for each other. Further, it’s been exciting for us to pool our knowledge about curriculum and digital literacies.

Bud is an avid and, at this point and prior to my research, well-known and respected educational blogger who writes under the moniker “Bud the Teacher”. During the course of my research, Bud tweeted “Identified in a meeting today as ‘the guy who makes teachers write.’ I’m okay with that.”

In following Bud online, I could see that this was true. He often creates spaces for teachers to write, and to write publicly. This was true in his work creating and facilitating a course called “Writing and the Common Core: Deeper Learning for All” at Peer-2-Peer University (P2PU) in collaboration with the National Writing Project. During the course of this research Bud facilitated weekly meetings and discussions, often linking to share resource he set up in pubic collaborative spaces. For example, he posted the Common Core standards themselves in an annotatable space so that teachers could response directly to the text; each week’s tasks, like creating reading, tool and technique lists, prompts for reflective writing, etc., were posted in editable and publish Google documents too. These resources were meant to be used by class participants initially but were open to all and remain open resources today for sharing and further collaboration.

Bud noted that a big piece of his job now is helping teachers to get comfortable in new spaces and new environments online. And in doing so he says he “spend[s] a lot of my time getting them comfortable in having an opinion [to share publicly].”

Meenoo also created a now very popular space for teachers to share publicly via Twitter called #engchat. #engchat is a weekly conversation that happens via Twitter every Monday night at 7pm.  When asked about her work online, she described the establishment of #engchat this way:

I knew this model of #edchat existed  … [but] no specific chat for English teachers. And I really wanted to learn from other teachers. I was in … a small English department and I wasn’t sure I was learning as much as I wanted to. So … I took a leap of faith and I said, well let’s try this idea of bringing English teachers together via twitter.

Since then #engchat has grown tremendously in the number of teachers participating as well as its reputation as a resource for English teachers (or teachers in general). In the course of my research, I regularly saw Meenoo facilitating this community (which is active now throughout the week) as well as the Monday events. On Mondays, she would introduce the weekly hosts, point to the weblog where the hosts would usually post some introductory text and prompts for discussion, participate in chats mostly by posting resources and retweeting questions posted by others, welcome participants as they join, and thank others for participating. Throughout the rest of the week I would see her capture what happened that Monday in an online archive at engchat.org, announce the host for next week, and respond here and there to tweets that were tagged with #engchat as well as post her own.

Lacy, like Bud, worked across a variety of public spaces during the course of my research, to share her work and surface work of her colleagues. She was constantly supporting their work in being more public to larger audiences. I saw her posting to the weblog she created and manages at the UNC Charlotte Writing Project, cross-posting to the UNC Charlotte Writing Project Facebook page, as well as posting and retweeing twitter comments using the #uncc and #nwp tag too about her colleagues’ work.

Tensions in being public were mentioned. For instance, in my interview with Chad, he talked about the dynamics of race and gender in speaking in public online spaces. As a white male he said that he has advantages in online spaces that others may not and that this is something to think and discuss more about when making spaces for others. He also spoke about push back from and to authority when  leadership itself comes from “teaching and learning in authentic ways in public despite being afraid of how peers or the system might judge us.”