It’s because of our experiences with Youth Voices that we could envision a network of exchange that would grow from the first poems, drawings, notes, reports, and songs that were published by teachers and students on Voices on the Gulf. Here’s what five of these voices sounded like in August 2010: 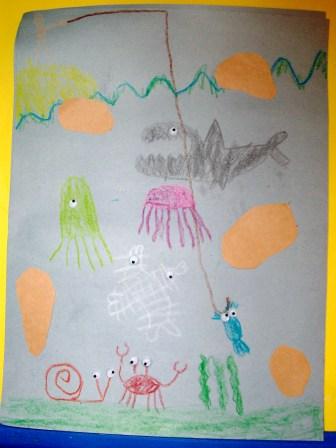 There’s “The Bad Oil,” by Haley, a first-grader from Louisiana:

When I see the pelicans in the paper

coming up on the land dead,

it makes me really, really sad.

I just want to snap and it will be all over.

There’s a note from Stacey Ferguson, a fifth-grade teacher in Mississippi. Her students have been in temporary buildings ever since Katrina and Rita.

The first day of school was unbelievable! It was the first time my 5th graders EVER went to school in a real building. They were amazed and almost in tears. All of us teachers were in tears. It was a beautiful thing. We will have an amazing year. I’m excited about Voices on the Gulf. Thanks again for asking me to be a part of such a neat project.

Another teacher Kyle Meador, is working with high school students in the Lower Ninth Ward in New Orleans.  He reports on a trip he took with students “down to Houma, the town of Dulac more specifically.” He writes:

Together, we learned about environmental degradation of the wetlands and how that has a detrimental affect on the nearby communities, and the rest of Louisiana. We saw what a healthy bayou looks like (thriving and diverse ecosystem of healthy trees, birds, fish, insects, etc.) Then we drove only a few miles over and saw the unhealthy swamps, where the trees and plant life has washed away and where the delicate ecosystem can no longer live. We took a stop at LUMCON, the Louisiana University Marine Consortium, as well.

After our tour, we went into the town of Dulac and met with Jaime in the Dulac Community Center. She spoke on how the BP oil spill has severely impacted their community, where almost 100% of the jobs there are some how dependant on Oil and Fishing. We also learned about how even before the oil spill, that there were very similar problems going on in their community.

Accompanying himself on “the Cajun style diatonic accordeon,” David Pulling, an administrator and English professor at Louisiana State University at Eunice sings a song for us that ends:

Each of these was gift that I was able to pass on to my students when my school year began in September 2010. More and more teachers joined the site as well so that students from kindergarten through graduate school engaged in student-sponsored inquiries and interrogations into the BP oil spill and the Gulf recovery in the Fall 2010 semester.