The engagement on this project was spectacular. Right from the start the students liked the idea that it was their project entered into a real world competition–not just something for the teacher, and the excitement grew throughout as the project itself connected more and more students.

As we started to work, some students finished their parts very quickly, and others took lots of time, one of the difficult parts about creative writing classes, but we forged ahead with other projects and also started to look at peer reviews.

I started to put all of the stories into one central google document that everyone could view. I encouraged students who were stuck to look at it and perhaps find a connection to focus on, and this worked well. Characters began to appear in other student’s stories. I also allowed for commenting on the document, so students were able to give suggestions to other students about how to improve their stories. I was very clear with the students about my expectations on the comments, and I was blown away when I found out that there were so many comments that the document froze. Students actually wanted to see what suggestions were made and were disappointed that it wasn’t easy to open.

Mentoring became a big factor in the engagement. As the project was a single work that represented everyone, students felt more connected to the revision process. Normally, the engagement with peer reviews is quite low, but here, because of its connected nature, everyone wanted the work to be better. Some of my students, who were non-participatory normally, actually told me that they wanted to have more time to work on their individual story before adding it to the whole project. One such student wrote something he felt so strongly about that I had to promise him not to let anyone see it till he could work on it over the Thanksgiving holiday.

About three quarters of the way through the project, my highest performing students had finished their parts and were reading through the entire story to see how all of the elements were fitting together. They realized they had created something different and beautiful. They were amazed by the many different voices, and how all the stories were connected. Originally, they just wanted to organize it so the stories were not just randomly placed. Soon, however, they asked permission to edit some of the pieces so the details would line up.

I asked the class, and everyone was fine with allowing their work to be edited so long as their voice was maintained. I created a new document and gave those students permission to edit. This group of students continued to work on the project well into the New Year.

About two days before Thanksgiving break, the class was cruising along, putting the finishing touches on their stories, when we hit a bit of a wall. Some of the students were starting to push back against the project. One student in particular was making comments about how it didn’t matter if the details lined up in all of the stories. I could see the conversation affecting the energy in the room, so I pulled up the final draft on Google Drive and started to enter the student’s stories that were not included yet. I saw that we had about 42 thousand words completed. As it was the end of class, I let everyone know where we were, and that we only had one more day to work on the book.

The next class, I let them vote on what we should do. The options were to just give up and say we did the best we could but only achieved about forty thousand words; we could push through and write some more on the stories we had; or, we could add some new voices, strive to get all the drafts completed, and build the book up to fifty thousand words.

I wrote an idea for a new story on the board; I wanted to get Dan Lobato into the story. He is one of the maintenance men in the building who always told me the most interesting stories when we would talk after school. I knew he would love to be included in the story, and no one had considered yet what it would be like for the person who had to clean the room.

Students really came through. Several other stories were called out that people wanted to include. For example, the shooter’s father teaching his daughter about guns years before the story took place. Then, some of the students who were already done with their stories volunteered to work on these new ideas. We went to the lab and everyone cranked out more than enough words to win the competition. The most powerful indicator to me of the strength gained in a connected learning environment also happened this day: the student who had been pulling the class down, making the comments about how the continuity of the project didn’t matter, volunteered to write Dan Lobato’s story. 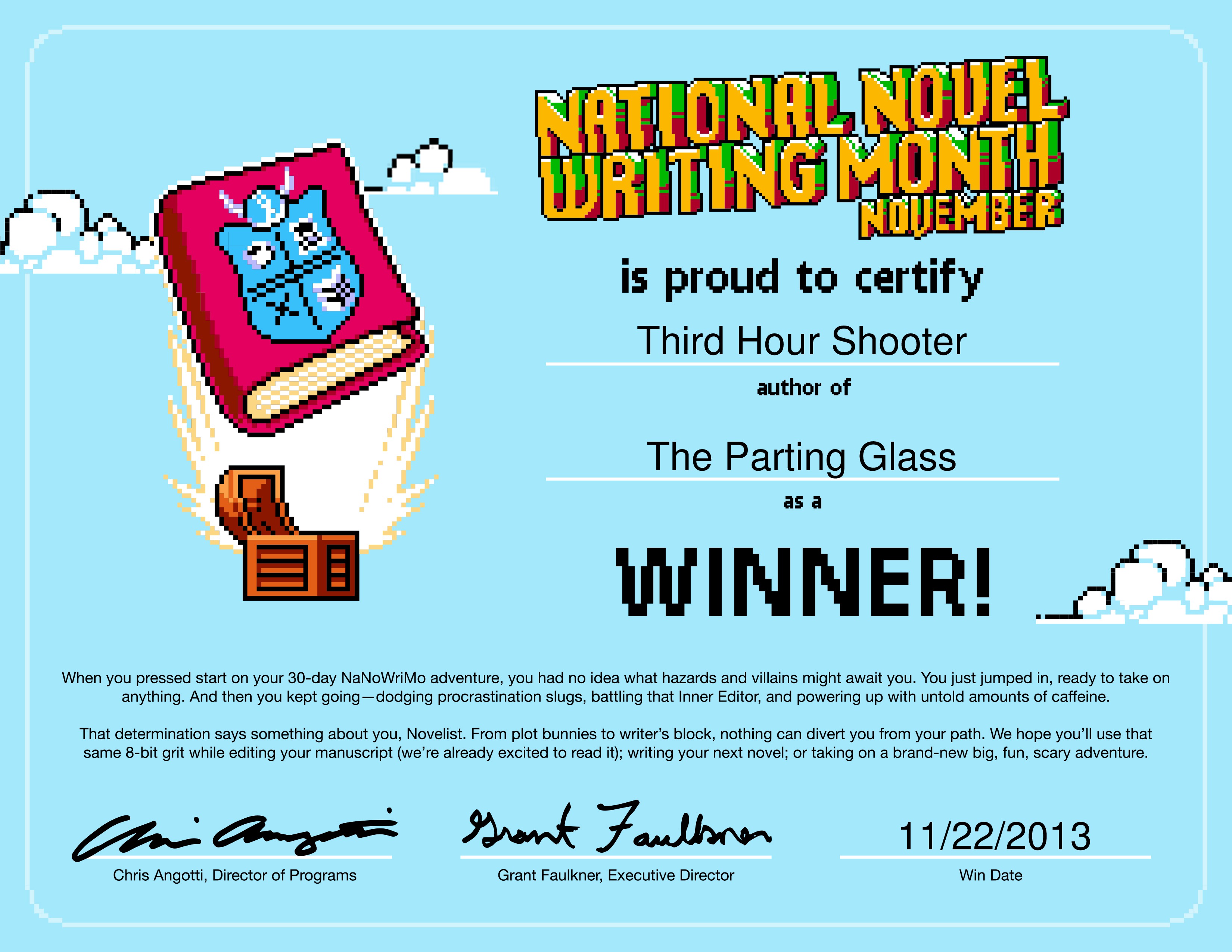 With students work over the break, we actually got over 70,000 words before the end of November. When classes began again, I presented the class with their copies of the award we won from Nanowrimo.

Then, we started to look at the stories themselves. The editors who helped to arrange the stories continued to report that the variety of voices was enchanting and they enjoyed the whole piece. I had several students ask to read the story in its entirety and do their book talk for the quarter on it.

For a final real world connection with the project, I asked my students if they thought it was good enough to submit the story to an agent for publication. They wanted to try at least, so they wrote an inquiry letter, researched and found agents on the internet, and sent it out. I’ll include one of the rejection letters below just as a sign of how engaged these students became with this project.

Dear Author: Thank you so much for sending the [us] your query. We’d like to apologize for the impersonal nature of this standard rejection letter. On average, we receive nearly 500 email query letters a week and despite that, we do read each and every query letter carefully. Unfortunately, this project is not right for us. Because this business is so subjective and opinions vary widely, we recommend that you pursue other agents. After all, it just takes one “yes” to find the right match.

Good luck with all your publishing endeavors.