After consulting with my building principal, discussing the rationale with parents at parent-teacher conferences, and fulfilling the requirements of the user agreement, we began using the resource. At first, the quality of writing was disappointing, and the comments were sparse and not very helpful. And eight-year-olds trying to touch type was painfully slow. Many students would spend the entire time working, and only type eight words.

Unexpected needs began to surface. Basic keyboarding skills such as inserting text and basic punctuation needed to be addressed. We learned that two apostrophes do not equal one quotation mark, that a space is needed after a period, and no, just because your name is underlined in a red squiggly mark it does not mean it is misspelled.

After a few hurt feelings and a few teacher-deleted comments, we began to discuss what it means to be a digital citizen, and considering what it means to have a truly public web presence: People who don’t know you might read what you’ve written and form an opinion of what you’re like.

We stuck with it. Every day we launched our writing time by viewing a published post as a class, noticing at first things such as how font type, font color, font size, and emoticons affected readability and impacted the intended message. Slowly discussions began to center more on content. Posts became more refined, and volume of writing increased dramatically as students became more comfortable with their typing skills. Kids naturally started each day checking for comments. When technology was uncooperative, lessons flopped, concerns arose, we candidly discussed the issue and adapted as needed. Quality of responses began to improve, as did the quality of the pieces of writing. 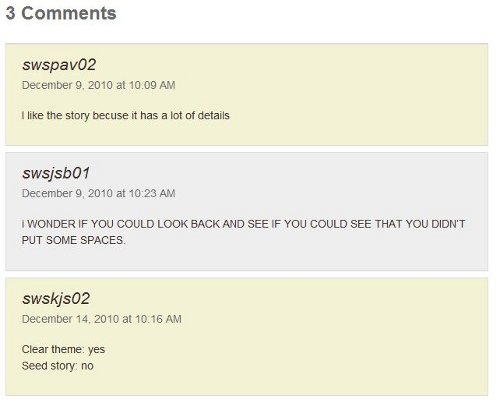 Eventually responses started to become more substantive and helpful, giving specific suggestions or asking thoughtful questions. My concerns began to subside as I began to see subtle but important changes both in student writing and in comments. They were starting to “get” it! 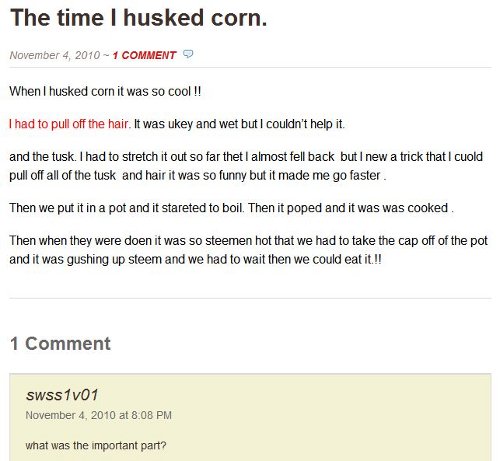