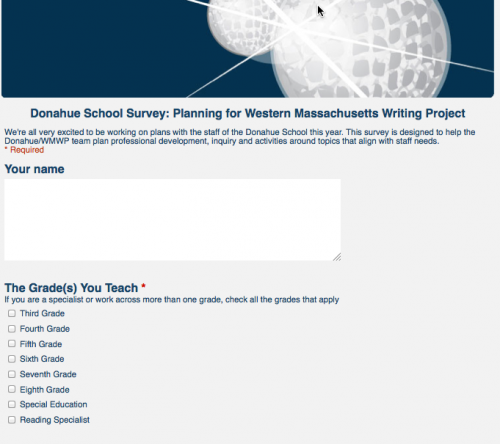 I feel one of my strengths is finding ways to encourage dialogue between students about academic topics. I also feel that I strive to integrate technology into the classroom as much as I can. — Travis

Past experiences with top-down professional development led teachers at the Maurice A. Donahue Elementary School to grow accustomed to being told what curriculum they would teach in their classrooms. This was a result of its designation as an “underperforming school,” although the Donahue staff is clearly one that is rich with energy and experience, and passionate on behalf of its students. When the Western Massachusetts Writing Project began some initial planning work for the SEED grant partnership, a collaborative planning committee of WMWP facilitators and Donahue teachers decided that the first steps should be to validate the voices of staff members, and provide them with an opportunity to have input into the professional development. We were not coming into the school with “canned” curriculum; the work would be shaped by the needs of the teachers.

Technology played an important role in this early stage of the initiative, as we turned to the survey function in Google Drive to gather information from the entire staff (even though we knew the final cohort would be smaller, given the commitment of time and availability of resources). Some of the questions on the online survey were open-ended (“What are your strengths as an educator?” and “What do you want to learn more about?”) and some were bulleted lists developed by the planning team based on SEED grant expectations.

It might seem like such a simple step – setting up an online survey to gather initial views about what kind of professional development would be most meaningful for teachers  — but in many ways, it sent a clear message forward to the entire staff: their voices and their needs were going to be front and center. Planning team members were also on hand to help teachers access and use the online survey tool online during a staff meeting at the school. Again, we were purposely sending a clear signal about technology: this technology is a valuable data-gathering activity and there is support available.

And we shared the results of the survey (complete with word clouds to pull out main ideas) right back with the staff as the Planning Team used the feedback as a guideline for developing the 30 hours of professional development that unfolded over the next six months. So, for example, the survey results demonstrated a strong interest in research writing skills, elements of Writing Workshop, and digital literacy, and those very topics became the heart of the six month program.

In this way, even those teachers who may not have joined the formal Professional Development session and workshops were still being represented in the planning stages, with the hope that this should make the distillation of learning from the cohort easier to share out with their colleagues as the new 2013-14 school year unfolds. Everyone had a hand in the planning the professional development, even those not directly involved. 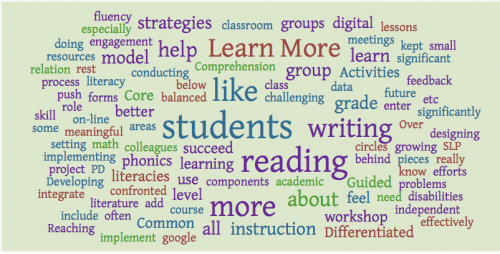 Making a MOOC: The Platform Decision

The technical aspects of how to develop and host a MOOC ar...
by Karen Fasimpaur

It’s becoming more and more evident in...
by Kevin Hodgson

Making a MOOC: The Platform Decision

The technical aspects of how to develop and host a MOOC ar...
by Karen Fasimpaur
See All Posts
Collection