Gaming without the Technology 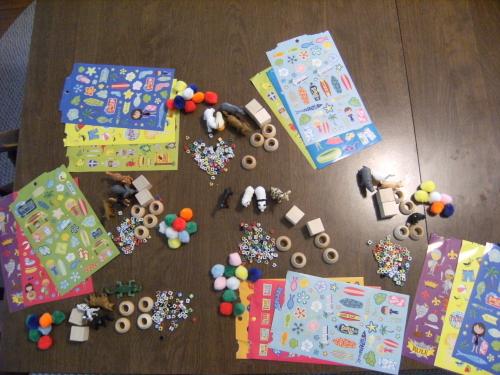 While I think that when we say “gaming” these days, our mind moves
right to some technology — either a mobile device or a console or a
computer — we wanted to start off our Gaming Camp next week away from the
computers. So, using an idea from a workshop I attended, we divided the students up into small groups, gave them a bag of “supplies”
and let them design their own game. It could be a board game. It could
be whatever they want.

I had fun going through the arts and crafts store, thinking of odds
and ends that might be interesting for students to use in this activity. We ended up with pom-poms, a bag of small letters (for braiding),
stickers, wooden blocks and circles, and plastic animals — plus some
oversized stiff paper, if they decided they do want to do a board game. I
also had some paper for them to write out the rules for playing their
games. That expository writing is part of the activity.

I gave extra materials to my six year old son, who immediately began
using them for his own “game” that somehow involved animals surfing from
one spot to another, avoiding creatures (such as the pom-poms). So, at
least, I knew this activity could be done, with a little imagination.

And really, this activity was merely to set the stage for when we moved over to the
computer. The reflective practice of what makes a good game and what (if
any) limits there should be for the player came in handy when they started designing their own games at our online site. The offline activity also got them working with each as a
collaborative group, and we wanted that bonding to happen so that they
could then help each other with constructive feedback later on.