In the summer of 2008, I traveled to New York City to participate in the National Writing Project’s Holocaust Memorial Library Seminar. This amazing event brings together middle school through college educators for two weeks of learning and collaborating about effective methods and approaches to teaching about the Holocaust, as well as more recent genocides.  As I listened to the powerful lessons my colleagues  had developed for their secondary students, a question kept coming to mind: at what age is it appropriate to discuss the topic of genocide? Is it appropriate, for instance, in the 4th grade study of California?  In my job as a district technology specialist, I visit many elementary sites.  The classic 4th grade California Missions projects that typically present missionazation as mutually beneficial are still displayed prominently at many sites, with no mention of the devastating impact on native tribes.  Yet, interestingly, the district-adopted 4th grade language arts text  includes a story about Anne Frank, written by her father, a Holocaust survivor. I left New York hoping to join a conversation with 4th grade teachers about how they approach the teaching of such a profound act of inhumanity. Surely not with worksheets or multiple choice tasks that limit students to simple recall, with no invitation to higher order thinking?

As luck would have it and as the new school year opened,  I assumed the coordinator’s position for our district’s Enhancing Teaching Through Technology (EETT) grant. Year one of the grant targeted 4th grade classrooms at three of our Title 1 schools.  Thus began my journey and my privilege of working with the dedicated 4th grade team at Prairie Elementary School. I happened to be on site providing some technical assistance the afternoon the team was planning for a Day of Tolerance, an event they hoped might transform the hearts and minds of their students, extending well beyond a single day. The students had read the Anne Frank piece and would be watching the movie as part of the day’s events. The teachers decided to weave in a local story of intolerance: the story of the forced removal from the West Coast of over 120,000 citizens of Japanese heritage following the bombing of Pearl Harbor. In a community that had once been the heart of California’s strawberry farms, justice failed, changing overnight and forever the history of Elk Grove. I suggested inviting community activist and former internee Marielle Tsukamoto as a guest speaker.

As the students listened to Marielle share her childhood memories of exclusion and discrimination and her belief in the importance of one’s culture in remaining resilient despite setbacks, they gained a sense that history does not happen just in textbooks; it happens in our own communities – and each one of us has the potential to be an “upstander,” even though initially it’s easier to remain a “bystander.”

While listening to these 4th graders connecting the past to the present, and grappling with issues of intolerance in their own lives, I knew they were having some of the same conversations that Pam Bodnar’s 8th grade peer mediators were having two hours north at Marsh Jr. High.  Because new technologies make it increasingly easy to connect students in different physical locations, I suggested to Pam that we introduce her students to the Prairie students.

My role was simple: I would provide whatever tech support was needed to get online conversations started. Although the Prairie team was initially leery of extending learning beyond their paper-and-pencil comfort zone and out onto the Internet, when they saw how energized their students were by the opportunities to collaborate, create, connect, and share, they began to come on board with the technology tools. 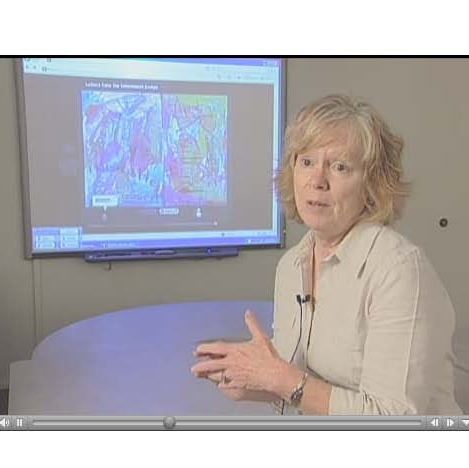 Lesley McKillop was the first digital explorer. With a little help, she set up her classroom blog.  The Day of Tolerance art and writing pieces that she had stapled to the classrooms walls, started making their way to the blog – and into interactive discussions with Pam’s students.  The two groups began to connect as a community of writers, which, within a matter of weeks, transformed into the Change Writers.

Before the school year ended, the two sites connected via an interactive videoconference for a virtual Change Writers meet up. Both groups had much to share.  What began as a discussion about bullying issues at their own sites evolved into a discussion about the consequences of targeting any group of people for forced removal from their communities.  The 4th graders were were clearly knowledgeable about the internment of Elk Grove’s Japanese-American population. The 8th graders shared what they had learned from interviewing three Holocaust survivors now living in the Mendocino region of northern California. Before the videoconference ended, Justin, a 4th grader, summed up the difference between these two chapters in history by explaining that “it was never the intent of the US government to kill the Japanese-Americans, but it was Hitler’s plan to kill Jewish people.” He then went on the share a Daruma doll from their student-made class collection, demonstrating the ability of the Daruma to bounce back no matter how many times it is knocked down. “Resiliency,” Justin explained, “is what helps people survive bad things and keep going.” 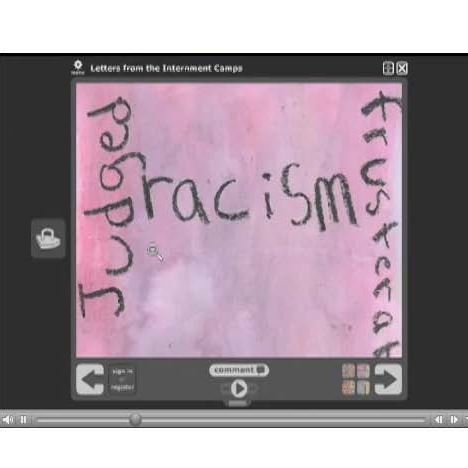 Without the technology, it would have been difficult for the above conversations, connections, and ‘ah ha’ moments to have happened. While technology is not automatically a silver bullet for engaging and empowering student writers – it can certainly help. When I walk into classrooms and find rich examples of writing on the walls, I feel compelled to hand over the staple remover and introduce whatever technology tool could best take students voices off the walls and out into the world. In the 4th grade wing at Prairie, as I walked across the hallway in any direction from Lesley’s room, I saw student work on display that begged for a broader audience.

In Lutricia Hardaway’s class, I found the walls covered with beautiful pieces about the students’ thoughts on our nation’s recent election of Barack Obama to the Presidency. I showed Lutricia what a VoiceThread looked like.  She had the student work off the walls within minutes, ready to be scanned and uploaded to the Barack Obama Rocks VoiceThread. Her students, who are too often confined by poverty to a small radius of the community, knew their voices were going beyond the classroom and felt validated by the growing bank of positive comments posted to their project. 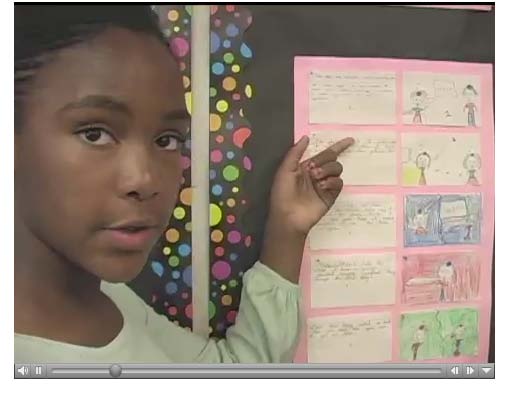 The last of the Prairie Change Writers (and self-proclaimed ‘total technophobe’) Halie Ferrier and I are still in awe of the transformation that happened in her classroom as the integration of technology helped shift ownership of learning to her students. We didn’t really need the ‘outside’ validation to realize that the Letters from the Internment Camps ‘off-the-walls writing’ was a powerful example of why students need and deserve an audience beyond the classroom. However, the related products that ensured, such as the Change Writers video and the correspondence with VoiceThread developer Steve Muth were proof that Halie’s students had developed a “stand out project”:

“First congratulations, everyone that I’ve shared the video and the VoiceThread with have been moved and inspired. I don’t think it’s any one thing but instead the combination of number of things that came together to make it so powerful. Educators are always looking for a way to engage their students, to make them aware of the importance of the work at hand, and to make them aware that their very own work has real and immediate value. You folks really succeeded on every level and I think promoting the project, and encouraging others to do something similar would have lasting value for educators and students anywhere.”

From blogging, to videoconferencing, to VoiceThread, I am struck by the possibilities for technology to level the playing field for all students, allowing them to take their voices to a global community, and, in the process, to become instruments of change as they challenge injustices and inspire others to social action.

The Communications Director for my school district con...
by Gail Desler

The Communications Director for my school district con...
by Gail Desler