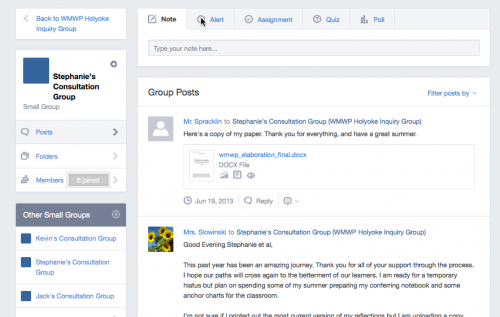 One of the questions I encountered while exploring Edmodo was: Can I put all of one student’s responses together to create a portfolio including assignments, responses, and grades? This question was answered when I took some time to explore the website. – Nicole

Early on, the collaborative Planning Team was in consensus that a space needed to be created outside of the school for the cohort of teachers to share, ask and answer questions and eventually, publish teacher inquiry projects. There are now more options than ever for online, networked venues, but we were looking for a space that was free, had low hurdles of entry for even reluctant technology users and might have ramifications for classroom applications for interested teachers. The school-centered social networking space, Edmodo, met all of this criteria, and more, and our collaborative space in Edmodo was up and running early in the Professional Development inquiry.

Prior to the deep work around classroom inquiry projects, the Edmodo space was mostly a place for the ritual writing in and out of the professional development sessions. Once the inquiry projects were underway, however, the space became an online home for teachers to could ask questions of facilitators and each other, seek clarification on reading and activities, call for more resources and share findings. Edmodo also became a virtual check-in point for facilitators and teachers. During the classroom inquiry project stage, WMWP facilitators set up smaller groups within the larger space so that “virtual coaching” could take place during the weeks between professional development sessions, offering another avenue for asking questions and receiving guidance. The online discussions nurtured continuity during times when face-to-face meetings were not scheduled, or rescheduled due to inclement weather.

Edmodo has remained a valuable archival space, as all participants shared their final presentations files and reflections there, providing easy access to a wide array of projects (from working with small group ELL reading instruction to using drama techniques to understanding open response questions) that remain online and available long after the Professional Development formally ended.

The implications of the work with Edmodo are two-fold.

First, the Donahue teachers in the cohort intend to create a space for their entire school, so that they can begin sharing and disseminating information about what they learned about the teaching of writing to other colleagues in the building, and establish a community of practice in a building where many teachers rarely see each other. Second, a number of teachers have already begun or are planning to begin to use Edmodo as an online writing space for their students. They have seen the value of online writing and sharing, and want to distill that learning into practice with their students.