Building on the Voices of Others

Building on the Voices of Others
Sometimes students find their writer voices through the voices of others, and any look at popular media today will show the myriad ways that youth write in a digital world by appropriating and remixing existing content, putting their own spin on work that already exists and that somehow might add to their own. A year after his first multimedia project, Josh, the student I refer to in Amplifying Student Voices, developed a music video through appropriation, building on the Nada Surf song, “See These Bones.” The final product doesn’t contain a single word of Josh’s own, but the process of crafting images of his own to illuminate the song makes the end-product one of writing.

Is this truly writing? In the traditional sense, maybe not. Digitally? Absolutely. Josh wrote this with a concept and a camera, wielding pixels, not a pen. His words don’t rely on spelling for clarity; instead, they rely on tone, shade, movement, and the lack thereof. The project was a stepping stone toward his piece, Change, a sensitive look at the societal and individual impact of economic hard times in Maine. Using the techniques from his music video, Josh’s digital writing was more purpose-directed in this project; his video was developed for the National Writing Project and Pearson Foundation’s Letters to the Next President, an online forum for youth to communicate their ideas about the pressing issues of the day. Building on the success of his music video style, this time Josh was crafting media and using his voice for a social purpose.

This idea of students developing their own voices by building on the words of others is nothing new; student writers have always stood “on the shoulders of giants,” borrowing words or phrases from other, more advanced writers. In many ways the approach is the mainstay of academic writing. But digital writing allows writers to build on content, developing their own voice through the inclusion of not only another’s words but also their music, images, even stylistic routes.

Consider my student Leeannza’s “Survival Guide” weblog, a collection of posts—both original and dependent on appropriated content. The project replaced a traditional English course final exam; her blog offered a compendium of tips to make it through life, all connecting the assigned and free-choice readings of a semester with her own ideas and judgments, flavored with YouTube vids. 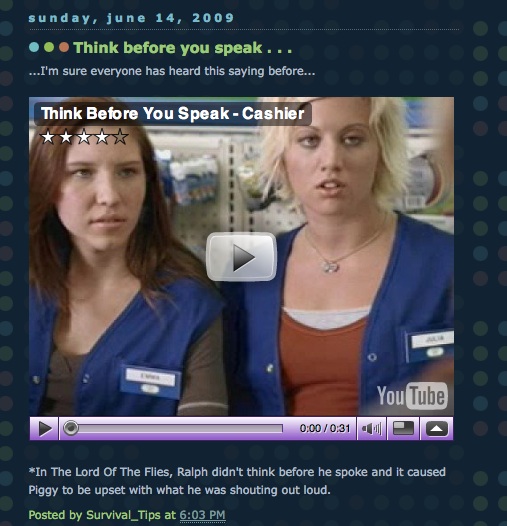 Leeannza’s selection of commercially developed media allowed her to use professional accents to highlight her own voice, enabling her to select work not only because of its professionalism but also because its content complemented her own style. In “Think Before You Speak,” Leeannza uses a contemporary commercial to highlight a relatively minor part of the novel Lord of the Flies, demonstrating how at least for her, one character’s simple act held a modern connection.

Voice reflects the writer, the expected audience, the purpose of the writing. Just as Leeannza appropriated content to highlight what she saw as moments of importance in a survey of an English course, Alex, another teen writer, appropriated with an aim to advance his narrative, as well as his own image as a media producer. Clips from CNN contributed information to his multimedia narrative about Patrick Tillman, the Cardinals football player who enlisted in the U.S. Army shortly after 9/11 and died in Afghanistan; the material also gave Alex’s project the image he sought: it sounded and looked professional, blending his own voice and his images with those of professional journalists.

Collaborating to Develop a Cohesive Voice
The idea of appropriating media, using the work of others for one’s own purpose, already exists in the social world inhabited by our students. And obviously, we can see how one writer can build his or her own voice by incorporating the works of others. Digital writing allows students to develop a collaborative voice—a communal voice, in a sense, with ownership resting both in the virtual community and in the writer’s own, appended work. MySpace pages are consistently pumped through the addition of professional music, images, and design, elevating the overall presentation to a professional level. This student’s use of the design potential of MySpace allowed him to take a similar tact as Leeannza, enabling him to cast his voice as that of Don John, one of Shakespeare’s bad guys.

While the possibilities of this piece open themselves for much more development, in this case one writer’s voice builds on another’s. Part of the student’s design takes advantage of the social connection capabilities of MySpace, and wisely. This writer linked his page to that of another Shakespearean MySpace page, giving him the chance to amplify his own work by creating a pre-built sublayer through the “friending” of another MySpace resident.

Collaboration, as in the MySpace example, doesn’t need the knowledge of the participants to take place; a simple search for the appropriate link and that connection is built. Other times, as evidenced by community, purpose-directed weblogs and websites, digital collaboration can allow groups of writers to showcase common styles, complementary approaches, or create media for a common purpose. That might come in a high school online newspaper, designed and written collaboratively with the intention of capturing readers through a shared, multiperspective voice, or through the combined efforts of teams of filmmakers as in the work of two young women who focused their efforts on benefiting a local animal shelter.

Conclusion
“Digital writing” is a tricky term. Writing instructors often see it as a simply computerized writing; words that were once scribed on paper are now typed, manipulated, colorized, shared as an MP3, or printed with funky letters. In the minds of many, the writing—the actual words—remain sacred. The writing defenders argue that it’s the “composition” that has changed, not the writing. For them, the end product remains one of words. I challenge that notion. “Digital” transforms writing. It doesn’t merely make it louder or prettier; it offers potential that did not previously exist. “Digital” allows writing to be made up of words—whether interactive, changeable words or fixed and unchanging words. “Digital” allows writing to be an invitation to participate, to change the words either directly, or via an alteration of meaning through the additional or removal of media. “Digital” allows participants to co-opt media, appropriate and redesign content to shape and amplify their own voice. In the end, writing is about communicating ideas that build or transform community. “Digital” brings that community within the scope of possibility.

“'Tis mine and it is likewise yours”
Even the unstoppable momentum of 21st century literacy has not managed to completely debunk the myth of solitary genius, and t...
by Katherine Frank

As I enter my 21st year of teaching at Thurston Hig...
by Kara Clayton

Directions are hard. I have wandered around many cities with little more than...
by Grover Welch
See All Posts
Collection