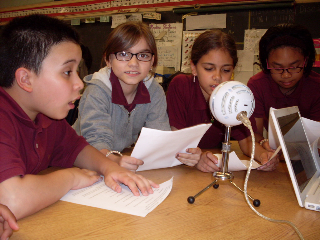 After several years of teaching 4th grade, I was ready to explore new learning opportunities with my students—ones infused with meaning, curiosity, and joy. To help me do this, I teamed up with Need in Deed, a local non-profit that aims to provide students a framework with which to become more civic-minded and productive citizens while gaining a practical application of the academic content of school. My work with this organization helped guide my instruction for the remainder of the year, and opened up new angles for me to analyze my classroom practice. Perhaps because Need in Deed was not part of the formalized curriculum of the school, I began to see content through a new lens.

For the next 9 months, our class took a systematic look at social issues that were of most concern to them. In the end, water conservation and pollution were the issues the class most wanted to focus on for the school year. It was a collective decision—from the bottom up, not top (teacher) down, and so investment was very high from the beginning. My role in this was to integrate math, science, social studies, and English language arts with the social issue the class picked, and to help carve out a service-oriented project in the end.

My role as a facilitator of learning rather than a dispenser of knowledge structured the nature of the task so that students took ownership from the very beginning. As a facilitator, I pulled together community resources that would help my students form a connection between what we were learning in class to what was happening outside of the classroom. The Fairmount Waterworks Interpretive Center was a crucial resource. Representatives from the center came to our classroom to work with the students and we were given the opportunity to visit them for a hands-on opportunity to understand the particular water environment of the Philadelphia region. Technology also helped my facilitation of the learning. Whether it was a classroom blog or a webquest, my job was to teach my 4th graders these modalities and then allow them to use the resources as they saw fit.

The school where my 4th graders attended was located in a particularly dense area of the city of Philadelphia. Brick row homes and concrete sidewalks surrounded the 100-year old school building. Few trees or open grassy spaces were available in the area, and although the city itself is situated between two important rivers, the Schuylkill and Delaware, it was highly unlikely that the students would have considered the rivers’ crucial role in their lives. Indeed, some may have had few occasions to visit or even partake in many of the river’s recreational opportunities. As perhaps with many children, water was simply something that came out of the faucet and never thought of again.

Another important aspect of the classroom was the role of language. The majority of our class was composed of English language learners, with Spanish being the dominant language of expression. However, all instruction was given in English. Making the content accessible to all students was a major consideration of mine, but the shared experiences that both technology and outside community resources afforded helped make the content less intimidating. For instance, much of the research and discovery came from navigating online resources like e-books from the local library. Some e-books were in multiple languages and those that were written solely in English required shared understanding with more proficient English speakers.

The core connected learning property of “shared purpose” was a natural fit for this project. One of the critical components of our service-learning project that year was the decision that all ideas were student-generated. Remaining true to the goals of Need in Deed, giving voice to the interests of the students was paramount.  Throughout the entire process, the students were active participants in their learning and all were working towards a mutual end-goal. As mentioned earlier, I saw my role as a facilitator rather than an instructor. This was a fundamental principle of the Need in Deed framework and one that resonated well with my overall philosophy of teaching and learning. It also felt right since all of us were new to service learning. Therefore, as the needs became evident, I found myself utilizing the most efficient and democratic on-line resources to allow my students’ voices to be heard. For instance, in addition to classroom discussions whether in large or small groups, for the first time I utilized a class blog to keep the discussions going. The blog enabled my students to post and debate ideas about various forms of pollution. My English language learners used digital images to help them make their points and to make connections with what was being discussed in class. When it was time to narrow down our topic for a service-learning project, the class utilized an online poll to cast their final votes. Obvious measures needed to be taken to safeguard the protection of my 4th graders while navigating social media and web-based communities. Parental permissions were collected, and sometimes communities were closed to those outside of the educational sphere. Nevertheless, our learning and project goals were still able to proceed forward.

In a classroom composed of large numbers of English Language Learners, equity is always a concern. Regardless of children’s language acquisition level, their perception of fairness is no less acute. Fairness, however, may not necessarily mean equal. How one child accesses information or participates in class may not look the same as for another child. To illustrate, Ydely entered our classroom from the Dominican Republic late in the year but she was determined to be part of the project despite her very obvious limitations with spoken English. Her heavy accent is easily recognizable in the podcasts yet her leadership skills and tenacity were undeterred. Though I was concerned that the communication of our ideas would not be as easily decipherable as with a native English speaker’s voice, I was not going to deter her spirit. Meanwhile, there were other students in our class with a much better command of English but who chose to take a less verbal role in the podcasting. The service-learning project offered a variety of entry points for all the children in the room to take part. Some students used their voice to communicate, such as during the podcasting phase of the learning. Others preferred to draw or write their ideas, such as during the brochure creation and information dissemination phase. Still others worked and learned best by physically doing the work, such as during the demonstration and presentation of the science behind water pollution and contamination. No matter what the phase, In this case, the principle of equity ensured that all children such as Ydely had a fair chance to learn and demonstrate what they knew based on their individual talents and interests. She was just as assured a place in the learning arc as the rest of the members of the class even though it may have looked and sounded different.

Perhaps the hallmark of a connected learning experience is the belief that learning happens best when peer networks are harnessed and meaningfully utilized to advance student interest and accomplishments. This was initially a challenge for me. I was accustomed to running a classroom on a tight schedule with controlled student interaction. As my comfort and level of experience increased each year so did the freedoms that were expressed in the classroom by my students. I remember specifically one moment during the year of our service-learning project when Jessica, a student, decided she wanted to interview each member of the class after one of our trips to the Fairmount Water Works. She took one of our class digital recorders and began circulating around the room, asking classmates about their impressions of the field trip and what they learned most from the experience. I also remember episodes of unease surface within me as I allowed this unscripted moment to continue. What resulted was a wonderful little collection of digitally recorded vignettes by members of the class which we later used in one of our podcast creations. Jessica followed her own interest by making these interviews. She undoubtedly constructed new knowledge for herself and perhaps for those she was interviewing when she walked around with the digital recorder recording their reflections. Then, during the podcasting creation she weaved everything together in a new digital format.

More than any other activity that year, the service learning project involved everyone. While some students, like Ydely and Jessica, naturally took on more demonstrative roles during the project, others found space during the project that felt right to them. Michael was perfectly content contributing a mountain of shoe boxes for the creation of a model city block that would help recreate water use within a typical city block. “We have lots of shoes at our house,” he said, “so that will be my job.”

In fact, because the service-learning project had many points of entry for the students depending on their interests, the ELLs in the room interacted with English organically. The language learning that ensued had a natural feel to it than if students were working independently out of a common basal reader. A specific example was the research and exploration of each area of pollution (land, air, water) that was necessary before settling on one class focus. Webquests served as the primary resource for information. Groups used the webquests to acquire information and ELLs were able to contribute to the information gathering based on their language comfort. Carlos, an ELL in the land pollution group who was just at a beginning level in English language proficiency clearly understood his group when he was tasked with locating images of items to fit in each of three categories, reduce, recycle, and reuse.

During the course of the project, teachers I spoke to often felt daunted by the work that seemed to be involved. As I reflect on that year, there are three ideas that come to mind which helped make the work achievable. First our work together had a very clear purpose. The Need in Deed framework no doubt helped to clarify our purpose. Once our goals were clear I was familiar enough with various digital tools as well as the mandated curriculum to help make all the pieces fit. I don’t think I could have accomplished as much if I were new to the profession or even if I was teaching a new grade. In my view, to make a new endeavor work in the classroom requires an incremental and purposeful approach. Second, keep an open mind. There were inevitable unforeseen bumps along the way, and this should be expected, but every moment counted as a learning experience. When one of our community partners came to our classroom for a scheduled visit to photograph the student work, our class was not nearly ready and I was mortified. Nevertheless, I had to remind myself to take a step back and allow the process to unfold as naturally as it should. Third, take a risk now and then. As described above, when Jessica began recording her classmates during an ad hoc moment, I was outside of my scripted comfort zone. My head said, “this is not in the lesson plan.” My heart said, “let her run with it.” What resulted was a meaningful experience not just for Jessica, but for the project as a whole.