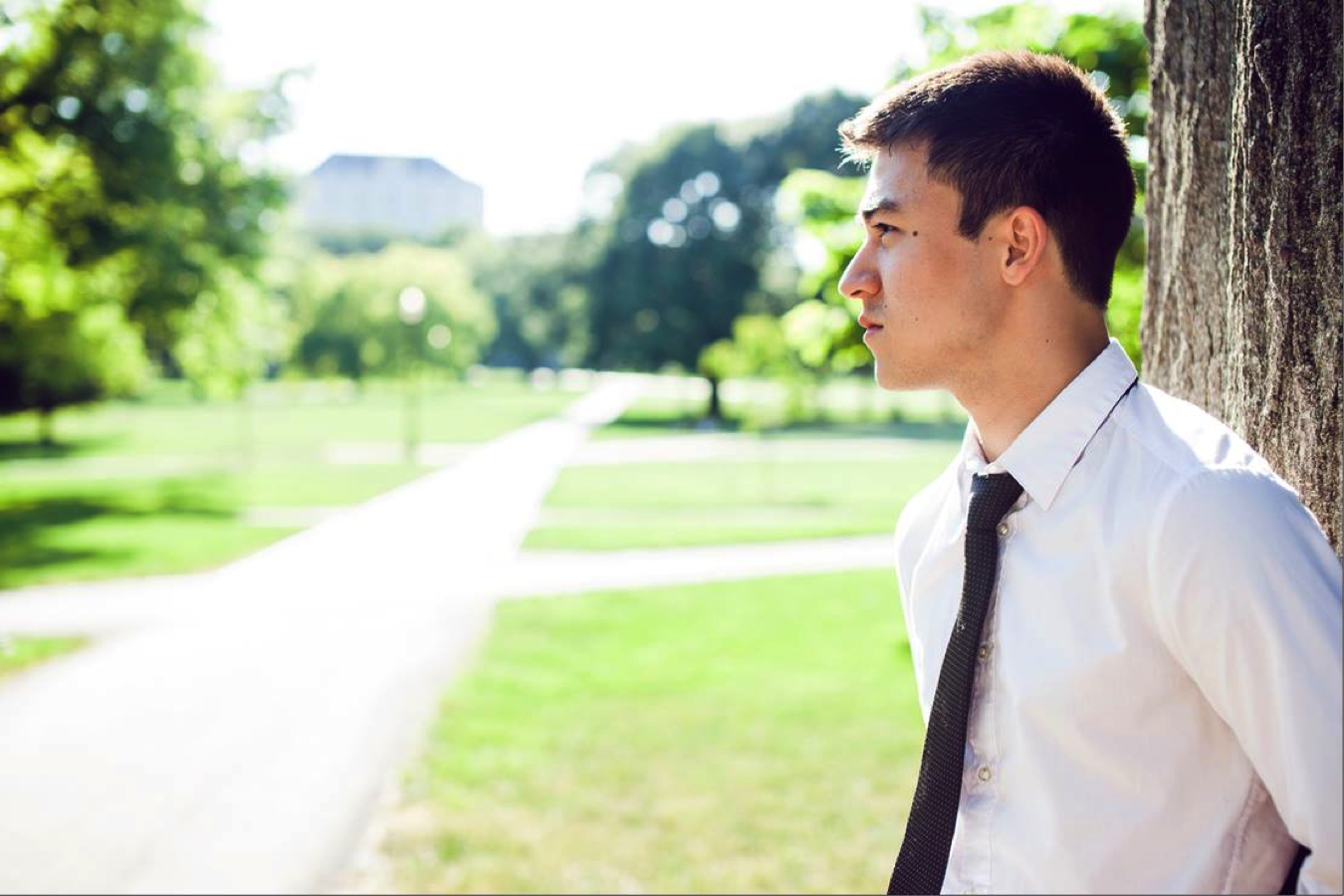 “It’s the traditional Bollywood romance: extravagant costumes, dancing and singing. Except for the lovers’ genders. This year, Northwestern’s Hindi Film Dance team Anubhav is telling the tale of a man’s struggle with his sexuality. With student choreography led by graduate student and Anubhav captain Yuri Doolan, the team incorporates everything from hip hop to bhangra to craft its groundbreaking storyline. At the root of the story is a struggle that resonates with all audiences: the struggle for parental acceptance…. Doolan himself is the son of a first generation American and single mother. He has experienced firsthand the disconnection between his generation and his mother’s, and the pressure that comes with it.” As the above excerpt from a campus newspaper article indicates, Anubhav, Northwestern University’s competitive Bollywood dance team made history in 2014 when Yuri Doolan, one of its captains, harnessed Bollywood dance to tell a same-sex love and coming out story, during the 2013/2014 competitive season. 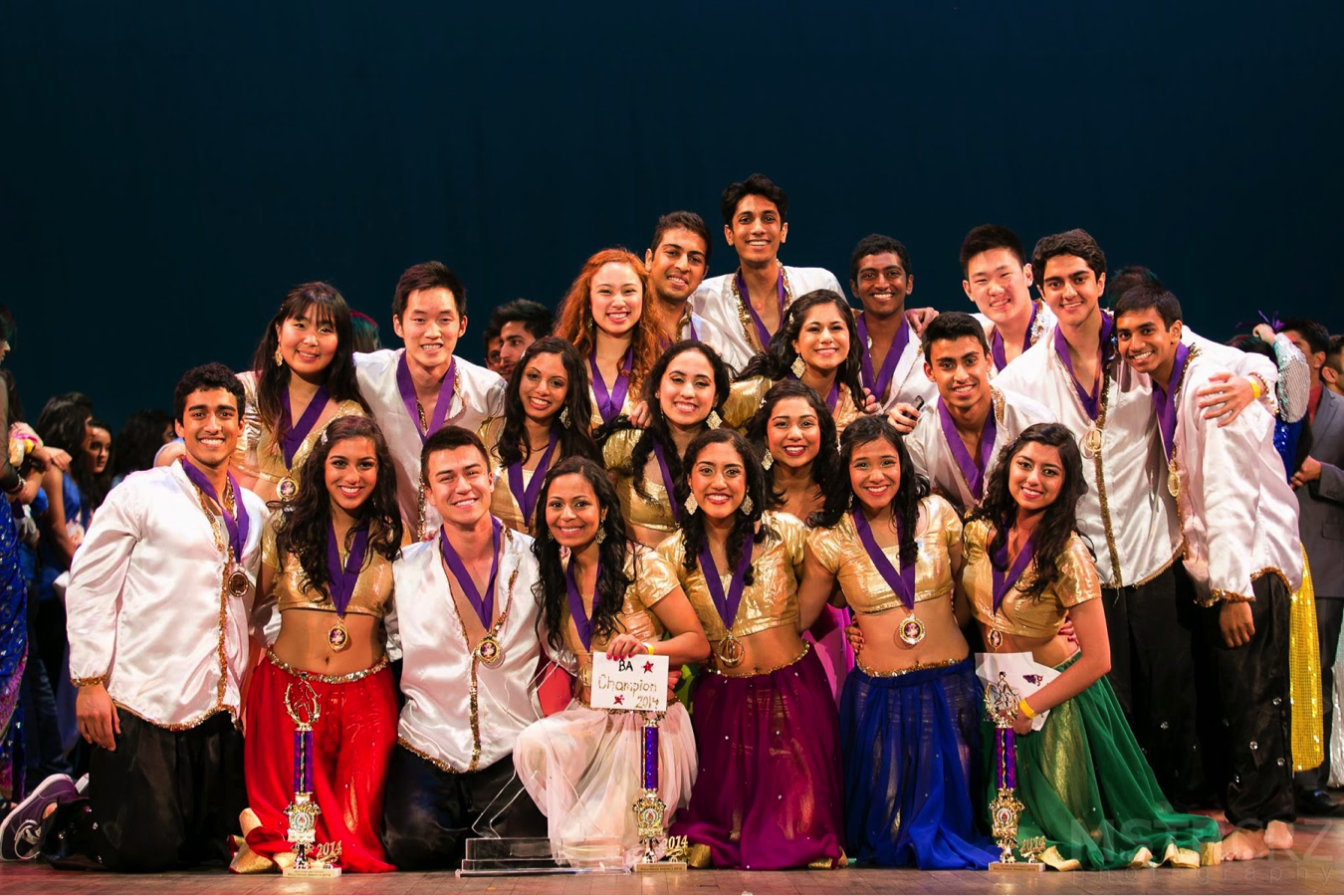 Doolan’s own dance journey began when he got involved with the competitive show choir at his high school in Cleveland, Ohio. He picked up some choreography specific steps, but never attended formal studio-based dance classes. When he got to Ohio State for his undergrad, Doolan initially decided to take a break from music and dance and focus on his declared pre-med major, which was something he felt he needed to do to live up to his mother’s expectations. He was not able to stay away from dance for long, however, and was soon involved with several dance groups, which eventually led him to discover Genesis, an all male Indian (Bollywood and folk dance) themed dance team at Ohio State. He auditioned, got in, and continued to get more and more involved with dance. As he reflects on his dance trajectory, Doolan stresses that he learned most of the dancing he knows though his peers and through his social media networks. Like others around him, he also turned to online user-generated videos, particularly those shared through YouTube, to find dance inspiration and role models. He explains:

“You don’t take classes at studios most of the time. Maybe you just can’t afford it….or maybe Asian Americans or South Asian Americans don’t own too many dance studios…. YouTube has become a venue for marginalized communities who aren’t represented in pop culture to express themselves and create their own subculture and their own venue for exposure.” 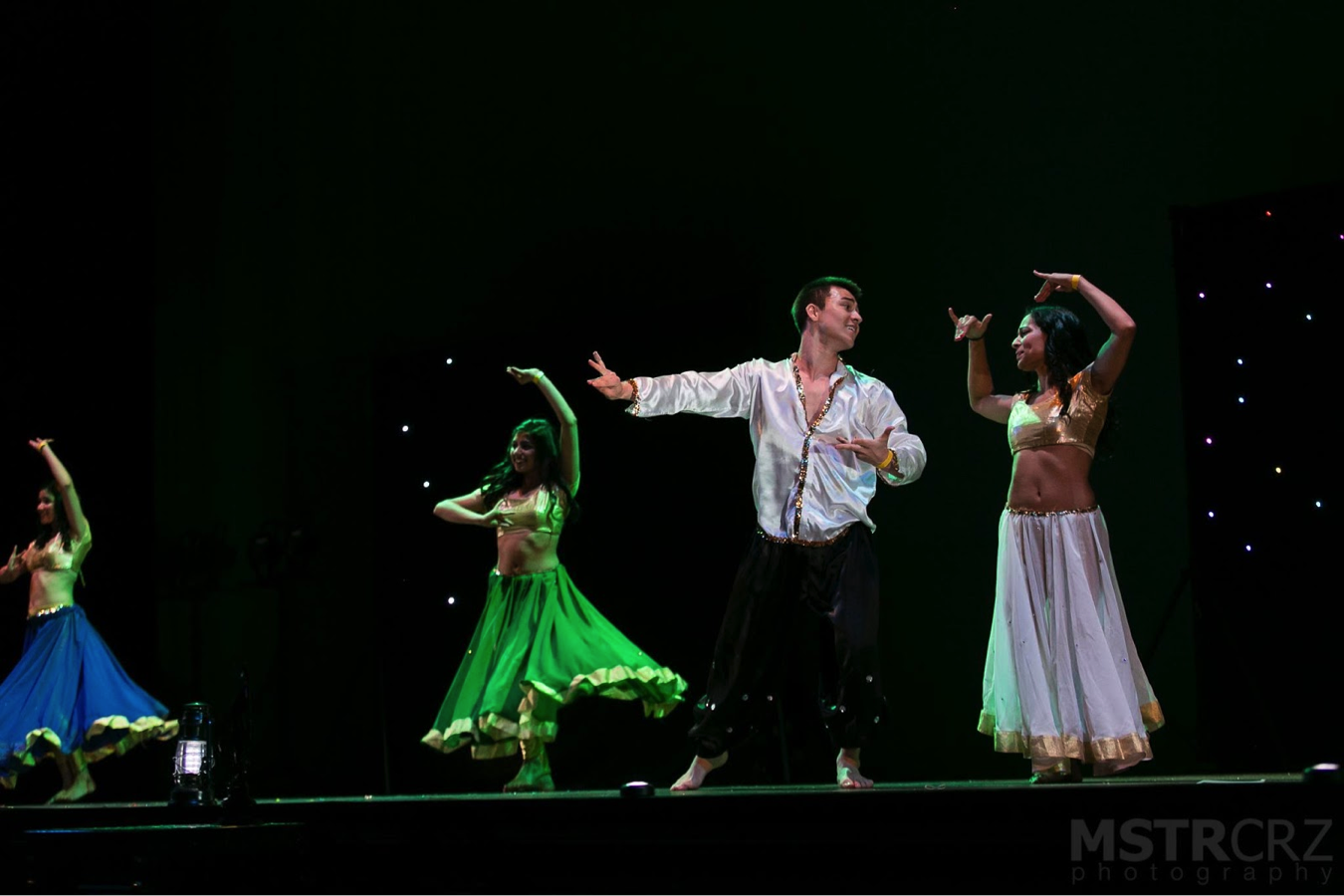 Inspired by song-and-dance sequences contained in Hindi films, the Bollywood dance competition scene on US college and university campuses is an outgrowth of Bollywood dance participatory cultures with the competitive element added in as a motivating factor. Bollywood dance teams now exist on many (if not most) large and medium sized college campuses. Once a team is established, its team members set out to ‘get it on the map’ by submitting applications to existing competitions. Organized by recent alumni from competitive teams, the competitions vary in focus: some stress choreography, others look at the whole performance and recognize that props and costumes are a key element of performance. Almost all competitions value storytelling as a key element of the dances that teams create. In fact, storytelling was one of the key factors that drew Doolan to Bollywood dance competitions. As a mixed origin Korean-American, Yuri had first-hand experience with hyphenated identities, and had struggled to find a place that would reflect his mixed ethnicity and dance interest as an undergraduate on his college campus. Though he was not familiar with Bollywood (or India), he found that the competitive Bollywood team, with it’s own inherent diversity, provided this space for him as it touched what he considered to be core of his cultural identity: the fact that he was brought up between two cultures and had to find ways to reconcile them. Doolan explains:

“The Indian dance team community or the South Asian American community, they were very accepting and welcoming. I think that has to do with the fact that there’s a lot of diversity in South Asian America. It wasn’t as homogenous as I thought it was. A lot of times the parents of these kids are coming from various different parts of India, speaking different languages, are of a different religious background. So, so much diversity within that, the fact that I was different wasn’t a big deal… I was never made to feel like an outsider really which is odd because within Korean American circles, I often feel like an outsider…. I think I jived with this community so well because there was just sort of an aura of diversity and acceptance within it.”

Doolan feels this ‘aura of diversity’ also translates into the “very second generation American” themes and narratives that teams weave into the performances they create for competitions – which at times touch on notions of nostalgia and conflict between first generation immigrant parents and their, more America-rooted, children. 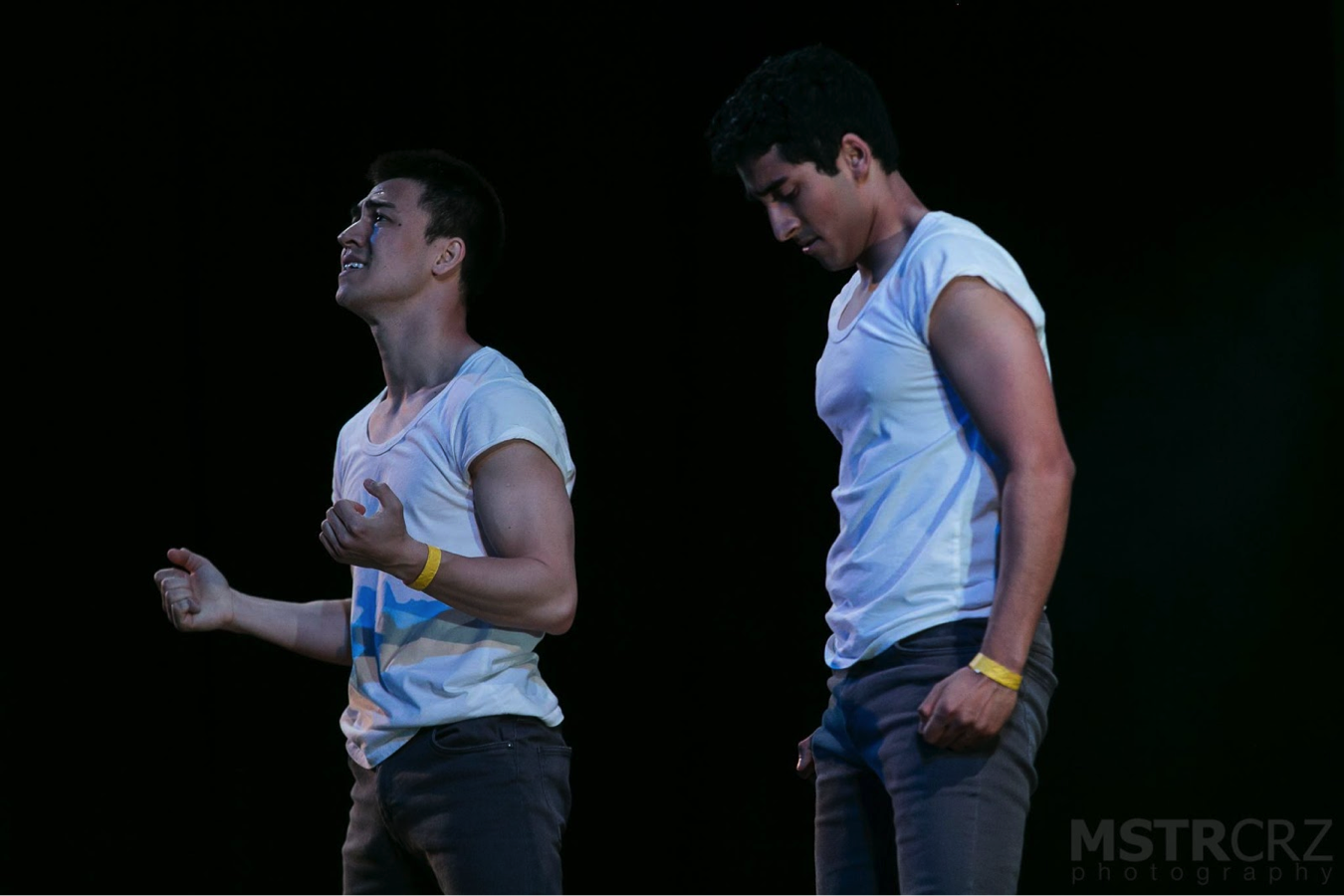 All of this inspired Doolan to use Bollywood dance to shift debates around social justice issues; he brought LGBTQ issues to center stage in the dance he conceived for Anubhav. The performance Anubhav created told the story of a young Indian-American man coming to terms with his homosexuality, a topic still taboo in many Indian communities, particularly as homosexual behavior is still deemed a criminal act under India’s penal code. In the opening passages of Anubhav’s performance, the audience met Neel, a young man who had grown up without his father and cared deeply about his mother. He had always tried to do “everything right” – he had attended a good school and found a good job. Neel was engaged to Anjali, who was his “inspiration” and who his mother also adored. But, despite all this, Neel just couldn’t “love her”. Set against the backdrop of wedding plans, the audience soon learned Neel’s secret – namely he was gay and in love with another young man. As the performance progressed, Neel struggled to come to terms with his sexuality, and eventually, with Anjali’s support, decided to “be the person he was always meant to be.”

The story Doolan created for Anubhav is autobiographical in some ways. Specifically, the “single mother background” and “negotiating issues of sexuality while being Asian American or second generation American” were key elements that came from his own personal experience. Doolan admits he was nervous when he first shared the idea with his co-captains and team, and recalls how touched he was when they supported him and understood that “the story came from within.”

After weighing the risks involved, the team decided Doolan’s story and the themes it surfaced were important enough that they wanted to pursue it. They all participated in helping it come to life. Despite this commitment, Yuri Doolan admits he and the team were nervous at their first competition in Atlanta. He provides his vivid account of this experience:

“We took it to our first competition in Atlanta. We were all really nervous. Before we went on stage, I kind of wanted to say this to the team the whole year… I just told them that no matter what happens, no matter what the results are or what mishaps go on stage, just remember that what we’re doing is something really important, it’s really special. It’ll always be our show, no matter what, whether it’s perceived well whether it’s not, whether we fall on stage, whether something crazy happens, it’s still a show that was made from the heart and it was a show that is uniquely ours and will always be ours. I think that got people motivated….I really couldn’t have imagined a better crowd reaction. The audience was so supportive and responsive. The moment they found out the main character was gay and holding the secret back, they erupted. At first it was an audible gasp. It was followed by people screaming and cheering. It was a really amazing experience, people on the team started crying at that moment because it just felt like so unreal that the storyline resonated with people that much.

The support Anubhav received at this performance gave the team the courage to continue to perform at other competitions, where they did encounter some controversy. At one prominent competition in particular, an older judge objected to the gay theme and questioned the “message it was sending to the young people?” Another judge present at the competition reported this objection essentially came down the following question: “Is your generation gay?” The dancers and judges I spoke with attributed this and other similar moments of controversy to attitudinal differences between older and younger generations within Indian American communities. Confirming this, an article published in India Currents on June 11, 2014, a popular Indian California community monthly magazine, put Anubhav’s performance in broader context when the author, Kamal Kamanth argued “this is what we need to do, as Indian Americans, to break the silence within our families and communities.” For Kamanth, Bollywood, as a popular, recognizable and participatory culture, can and should become an accessible “medium” that youth can use to “showcase our stand on this issue” in ways that the “message of both cultural and LGBTQ pride will be heard.” For the youth, Anubhav’s performance used Bollywood dance to explore acceptance of multifaceted identities, which they felt were all part of what the Bollywood dance competition community could take on and embrace. For some older judges and audience members, Anubhav’s explicit engagement with homosexuality on stage pushed the performance beyond the boundaries of what was appropriate for an Indian themed performance in America. Notably, Anubhav won first place at Bollywood America in 2014. For Doolan and the team, the experience has been first and foremost encouraging, as they were “really grateful” and “humbled that people understood and accepted the story.” 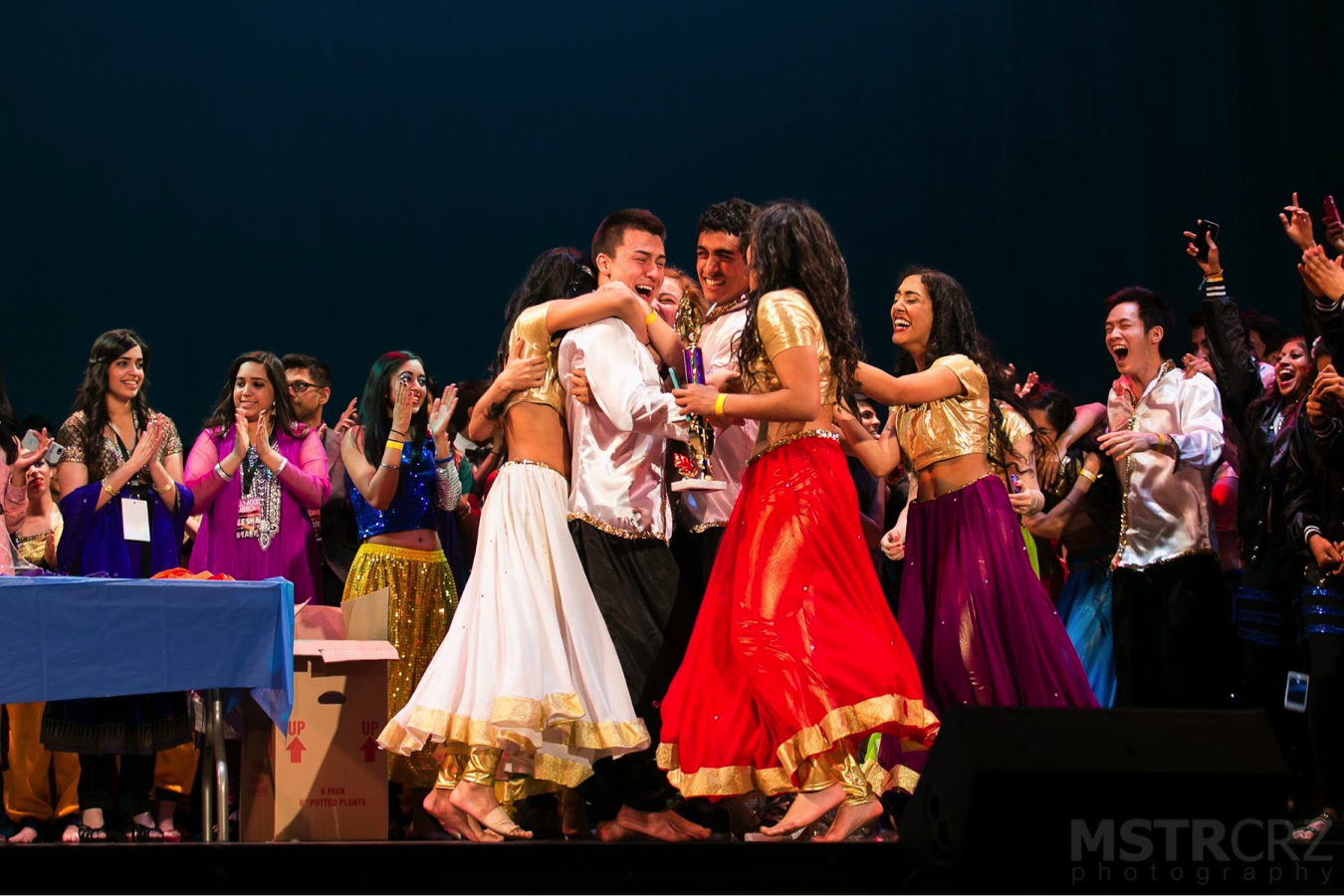