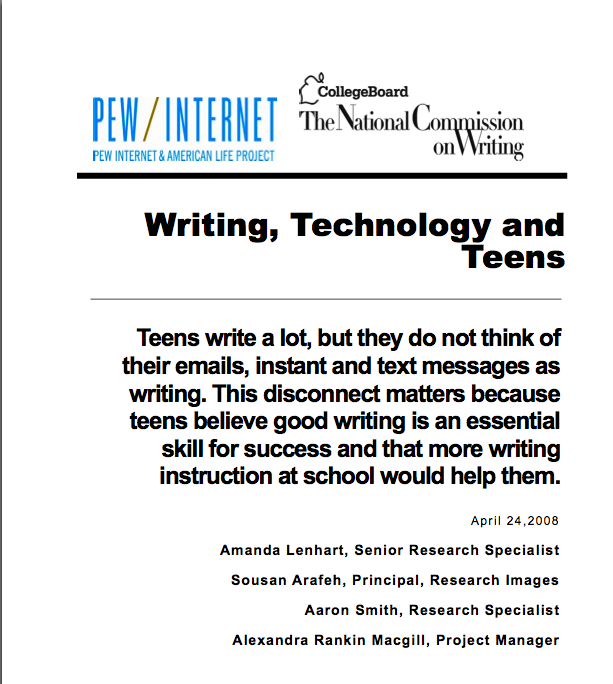 The digital age presents a paradox. Most teenagers spend a considerable amount of their life composing texts, but they do not think that a lot of the material they create electronically is real writing.  The act of exchanging emails, instant messages, texts, and social network posts is communication that carries the same weight to teens as phone calls and between-class hallway greetings.

In 2008, the Pew Internet and American Life Project and the National Commission on Writing partnered to author a research report looking at how teens identify as writers based on the increasing trend towards exchanging electronic, text-based communication with peers.  The report that was produced, “Writing, Technology and Teens”, sought to address how teens define their writing, the role of electronic technologies and communications platforms in writing, whether pleasure is derived from writing in-and-out of school, and better understand how teens experience instruction of writing in-school.

Growing concerns have been raised about the influence of electronic communications technologies, such as text messaging via mobile devices and web based utilities, social networking websites, and e-mails, suggesting that common practices, such as shortening words, use of acronyms to replace phrases, and lax punctuation and grammar, will degrade quality writing.  Many parents believe, however, that teens are writing more, now, than they did when they were teens and are less critical than their children about the impact the computer has on writing.

Many teens surveyed still held a traditional view of conceiving writing, as something unique from that which they do using technology.  These practices are considered communication with peers, from which teens derive different pleasure than they do from writing for pleasure and for work.

The report also found that teens would further enjoy writing and engage in writing practices more freely if they were given relevant topics, if they were challenged by their teachers, if they believed they had authentic audiences to whom they could distribute their work, and they were given opportunities to write more creatively and with more time in school.  Though out-of-school writing for pleasure occurs, almost three-quarters of respondents wrote for pleasure by hand, and many see writing on the computer as a tool for ease and convenience.

The researchers found out that both parents and teens recognize the importance of writing and that teens desire to become better writers.  However, parents and teens differ on the benefits of technology in assisting in that process, and believe that electronic, text-based communication will improve writing skills, such as being able to present ideas clearly and put more effort into their writing.Open Writing, Technology and Teens_PEW.pdf