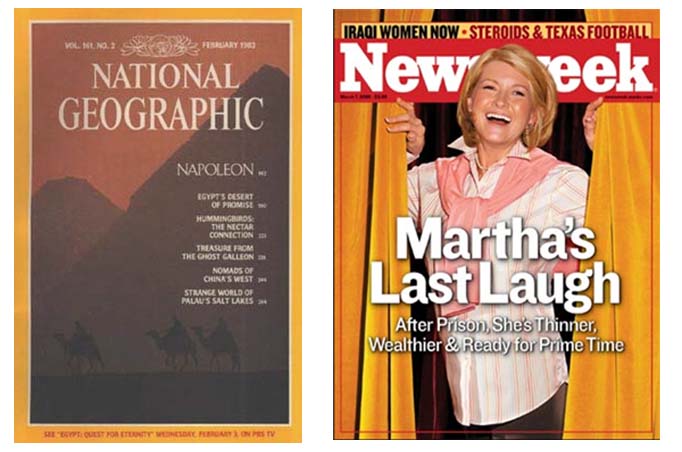 When Images "Lie": Traveling to the Pyramids with National Geographic and Thinking about Photo Illustrations with Martha Stewart

In February 1982, National Geographic published a cover story titled “Egypt’s Desert of Promise.” Two of the great pyramids appeared on the cover, behind the silhouettes of three figures on camels.

Soon after publication, readers started writing the magazine, some pondering the photo and others decrying it. National Geographic finally fessed up and admitted that the pyramids were squeezed together to fit the magazine’s vertical format. The editor at the time referred to this technique as “retroactive repositioning of the photographer.” The technique was actually physically cutting pictures and moving the pyramids closer together — an act easy to accomplish today with adobe Photoshop, but which required a craft knife, a steady hand, and a good deal of patience back in 1982.

Tom Kennedy, who later became the director of photography at National Geographic, stated: “We no longer use that technology to manipulate elements in a photo simply to achieve a more compelling graphic effect. We regarded that afterwards as a mistake, and we wouldn’t repeat that mistake today.”

In comparison, take the more recent example of Martha Stewart appearing on the cover of Newsweek in March 2005. At the time the cover was published, Martha Stewart was in jail, serving time for lying to federal investigators regarding her selling stock she held in a U.S. company.

Soon after the issue of Newsweek was released, USA Today published a short article inquiring as to how Newsweek supposedly gained access to Stewart for the photo shoot. On NPR’s “All Things Considered,” Robert Siegel interviewed Lynn Staley, the assistant managing editor at Newsweek to discuss practices of creating “photo illustrations.” A photo illustration is essentially a collage piece, using different photographs to create one image. It is typical in journalistic contexts to label the image as such. In the Newsweek cover, however, the details about the photo illustration appeared several pages in the magazine, in tiny type within the masthead. Listen to the NPR story at: http://www.npr.org/templates/story/story.php?storyId=4520166.

When Images “Lie”: Critical Visual Literacy
What does it mean to be “visually” literate? How can we encourage students to be more deliberate and careful in how they look...
by Danielle Nicole DeVoss

The Necessity of Freedom in Education

I post this to the NWP community to share news of a Silv...
by Bryan Ripley Crandall

When Images “Lie”: Creating Diversity at the University of Wisconsin

The advent of digital photography has made i...
by Gavin Tachibana

The Necessity of Freedom in Education

I post this to the NWP community to share news of a Silv...
by Bryan Ripley Crandall

When Images “Lie”: Creating Diversity at the University of Wisconsin