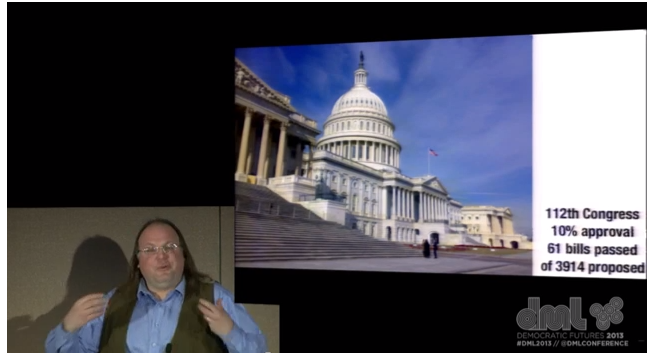 Thinking About Teaching the New Civics

In 2013 the DML Conference landed squarely on the question of the relation between digital media and politics, calling questions about civic education, new views of social justice, and youth engagement in shaping their world. Much of the substance of these questions came from the work of the MacArthur network on Youth and Participatory Politics, or YPP, which has been looking at evolving understands of civic and political life with an emphasis on young people.

So what’s that all about? And what does it have to do with teaching?

Ethan Zuckerman, a member of MacArthur’s Youth and Participatory Politics network, did a masterful job of laying out the argument for a new understanding of civic participation in the conference keynote. Zuckerman is Director of the Center for Civic Media at MIT Media Lab.  Before that, he was a Fellow at the Berkman Center, and has a long history of thinking about technology’s role in civic and political engagement. Reflecting on his talk a few weeks after DML, Ethan characterized his thinking this way:

My talk examined how digital media is changing how we participate in the civic life of our communities and the world as a whole, and how we might teach a new, digital civics.

This is an issue I’ve been thinking through since coming to the Center for Civic Media at MIT. My friends at the Knight Foundation and the founders of the Center – Henry Jenkins, Chris Csikszentmihalyi and Mitch Resnick – believed that our capacity to participate in governance and work for change is expanded and shifted through tools and techniques newly at our disposal. While there’s good reasons to believe this is true – digital tools make it easier to share your views with large groups of people, to find like-minded people to work with on change, and to raise attention and money – there are also reasons for skepticism that new paths to participation will have the power and impact of older, more established forms of civic participation. I don’t have the answer to the question of whether digital civics is all that different from older models, or whether it’s more effective, but I’ve been trying to introduce language that makes it easier to have these debates.

Above, find a video of his keynote—well worth a look.  You can find a full set of the slides at the URL below. Zuckerman begins at 20 minutes, 47 seconds. Full disclosure: I’m a member of the committee and therefore partial, but I think you’ll find it fascinating and informative nonetheless.

Yesterday, I saw this quote on Twitter p...
by Karen Fasimpaur
See All Posts
Collection