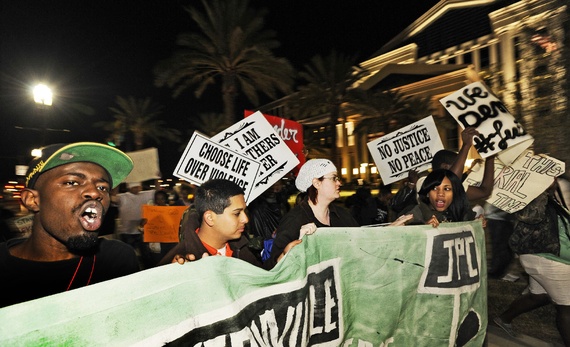 Teaching About the Jordan Davis Murder

[This post represents the work of a group of educators and education activists who wanted to help educators  help students process the verdict in the Jordan Davis murder trial. Many of us wrote from our experiences both in and out of the classroom, and as such, many of us used “I” statements in talking about these ideas. The writers are Melinda Anderson, Joshua Block, Zac Chase, Alexa Dunn, Bill Fitzgerald, Matt Kay, Diana Laufenberg, me, Luz Maria Rojas, John Spencer, Mike Thayer, Jose Vilson and Audrey Watters. You can also link to the Google Doc or the whole thing as a PDF. Everything written below is collaborative. This document is Creative Commons – Share Alike. I only add that as educators, this is a way we can make the world just a little bit better – by talking, by trying, by teaching. There are many other ways our society has to address the issues that Jordan Davis’ murder demands we face. But as teachers, we have our classrooms. We can all can start there. — Chris]

As educators we believe that we have a responsibility to use our classrooms to help young people grapple with and address the messiness of the world around them. In collaborating on this, what we know to be true is that there is more than a single lesson plan here. The issues raised by the Jordan Davis murder trial touch deeply on issues of race, law, social justice, and any and all of these issues could be a course of study. What we hope to do is offer a number of ways for teachers and students to think about the case while knowing that no one way, no one day can possibly speak to all of the challenges this case represents.

General Thoughts About Teaching Toward The Jordan Davis Murder and Verdict:

Ideas and Resources for Teaching the Jordan Davis Murder Verdict

Provide students with scenarios that allow them to take a stand on whether something was just or unjust. Suggestions – students can jot down their thoughts first and then use the ‘stand on a line’ or ‘opinion continuum’ activity for students to indicate where they fall on the just, unjust spectrum with each of the scenarios.

Scenario 1: A family is forcibly interned (confined for political or military reasons) for 2 years because they are American citizens of Japanese descent and the government decided they were dangerous. (Reference)

Scenario 2: Homeowners lost their homes in order to make room for a General Motors plant to be built.  They were fairly compensated by the government for the cost of their property but were not given a choice to sell or not sell.  (Reference)

Scenario 3: 16-year-old drives while drunk and kills 4 people. He receives probation and no jail time for the crime.  (Reference)

Scenario 4: Children are removed from their homes and taken to boarding schools where they are taught that their native language is bad and must learn English, take ‘western’ names and adopt western customs in order to fit into American culture better. (Reference)

Scenario 5: A man was released from death row after 15 years when DNA evidence was used to clear him of wrong-doing in the murder of his cousin. (Reference)

Then introduce the basic facts of the Jordan Davis case, including information on Stand Your Ground and self-defense – ask students to write down questions as they hear the facts of the case.  Allow time for question and answer time.

Have students develop statements about how justice and injustice relate to this case.

Play/read different perspectives of people after the verdict.  Discuss the emotions and frustration felt by many Americans as a result of the verdict.

Talk about action steps… if one wanted to speak out against or DO something … what are options.  Brainstorm and then teachers shares ones not mentioned. Such as:

Resources to continue the conversation:

I think lesson plans that bring up pertinent questions that help kids wrestle with the subject are most useful. Especially I would like the lesson plan to help kids see that Jordan Davis is emblematic of what happens in schools via zero tolerance and black males disproportionately affected by suspensions/expulsions. When does an innocent high school student become “intimidating,” “threatening” or “suspicious”? That’s why “Stand Your Ground” laws are so flawed – because its underpinning is that bodily harm or death is justified if the person feels intimidated or threatened – people can feel threatened if they are scared or paranoid about their safety. How does “intimidating,” “threatening” or “suspicious” look in their classrooms, their schools, in their daily interactions outside school – by exploring from their own experiences, that to me as a parent would be most valuable. My son has said that he notices people judge him and his friends by their appearance, depending on how he’s dressed. It makes him feel self-conscious. Maybe explore those concepts:

Have you ever had a moment where you felt that someone judged you because of your perceived race, gender, age, religion, sexual orientation and/or manner of dress? How did that make you feel? Or have  you ever judged someone based on those perceived attributes?

In small groups, have students discuss their personal reactions to the journal entry for several moments. Then ask groups to share out with the class what they discussed.

Have students read the New York Times article on the Jordan Davis case:

In small groups, have students take on the following questions and then share out:

The goal of this lesson plan is to give students the chance to talk about the trial, about their feelings about it, and then do meaningful, real work that allows them to address the problems they see in the trial / the law.

Read one of three articles about the trial:

Give students blank index cards. After they have read the background piece, students write one adjective describing their thoughts on the piece. Then, the cards get collected and displayed in a publicly visible space. This process creates the room for people to all get familiarity with the issue, along with some time to collect thoughts/emotions before starting discussions.

In small groups, come up with an action plan about what can be done to make a more just society / country / community. Some potential activities include:

Thank the kids for being willing to engage in the conversation. And tell them you love them. And mean it.