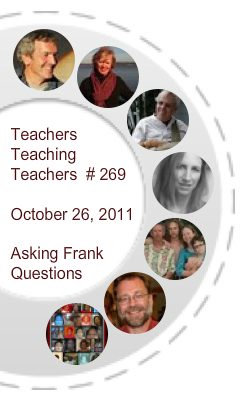 At about the time a new social network called Facebook was launching back in 2004, a series of groundbreaking developments was making it possible to share more than just text and pictures via the Web.

An upstart Internet phone service called Skype allowed you to talk with people anywhere in the world for essentially no cost, as long as you were online and in front of a computer. And Really Simple Syndication (RSS) had led to the advent of podcasting, a kind of episodic radio in which you controlled when and where you listened.

In New York City, Paul Allison, an educator and tinkerer with the NYC Writing Project, was pulling together these and other tools into a fledgling online conversation space  for educators—what would soon become the Teachers Teaching Teachers (TTT) weekly web radio program.

Now, on May 30, six years after it first launched, TTT—as it has affectionately come to be known—celebrates its 300th episode, a remarkable milestone considering the rapidly evolving world of educational technology where ideas sometimes fall out of favor while still in beta.

Over the course of those 300 episodes, Allison and his friends who helped develop the program have hosted the founders of Tumblr and VoiceThread, teachers and students writing about their experiences on the Gulf Coast after the B.P. Oil Spill, authors like Chippewa River Writing Project’s Troy Hicks (who has been on the show 24 times), and visionaries like Howard Rheingold and Deborah Frieze. Through it all, the show has held true to its title: TTT is most often a group of educators puzzling through a question, sharing their work, or glimpsing the future.

Although TTT is no longer simply an audio program—guests now converse via video on Google+ Hangouts On Air  each week—you can still subscribe to the podcast and listen to it each week on your favorite mobile device.

“Doing a show is about the weekliness of it, having a schedule,” Allison says by way of explaining his persistence in making sure TTT airs every Wednesday, almost without fail, at 9 p.m. eastern. “It was important to me early on that a podcast was more than putting audio on the Internet. Having a show is about being there every week and people knowing that if I miss it this week, I can get in and participate next week.”

The show’s roots can be traced back to Allison’s early experimentation with Skype and audio with Writing Project teachers at an event called “Tech Matters.” Allison then began using Skype as a way to engage in planning conversations with a group of New York City teachers coalescing around an idea they called Youth Voices, a nascent youth publishing website that is still going strong.

The goal from the start was always to experiment with new technologies as a way to understand better how to use those same tools in the classroom with students. Youth Voices, for instance, began as a way to capitalize on podcasting as a means for students to publish, literally, their voices as they discussed issues of importance to them.

“The big principle from the beginning was to always do things that we could do with our kids in our classrooms. So it was about eating our own dog food. We also wanted to create processes that were easy enough so that others in our writing projects could do them,” Allison says.

Allison and Ettenheim joined an EdTechTalk program, which turned out to be a synchronous web broadcast, unlike their pre-recorded podcasts. “Why do you do this live?” Allison recalled asking Jeff Lebow, one of the founders of EdTechTalk, while on air. “And Jeff Lebow said, ‘Because Paul Allison shows up.'”

That was enough for Allison. The idea that Teachers Teaching Teachers could be an open conversation, broadcast on the web with whomever showed up for that particular show, was utterly appealing. It was, Allison has said, the virtual equivalent of a faculty lounge, where ideas could be shared real-time among peers, including anyone who happened to walk into the room.

TTT began webcasting through the EdTechTalk portal and has been doing so ever since.

Situating the program at EdTechTalk led some listeners to think that the program was about technology, and there have been many technology-oriented episodes over the years—from conversations with developers of the open-source platform Drupal to examinations of game development. “We expanded from just being about teachers to also being about the tech guys who are building things for teachers. So we could then provide them some feedback on what’s going on and they could provide feedback to us,” Allison says.

But ultimately TTT is about education and the free exchange of ideas.

“We pretty quickly decided that we weren’t about technology, necessarily,” Allison says. “We were about teaching and learning and multimedia expression.”

Allison invites guests whose work he’s curious about, from teachers to educational consultants to ed-tech developers. He may read a book, then reach out to the author; and more often than not, the person contacted agrees to be on the program.

Throughout its history, TTT has also been about advocacy. The show provides a platform to get involved, to do something concrete in support of a cause.

TTT’s work in relation to the BP Oil Spill is a great example. In the aftermath of the Gulf Oil Spill, Allison developed a website, Voices on the Gulf, which garnered teacher and student writing in response to the impact of the oil spill on their lives. Allison also invited educators from the New Orleans area onto TTT, to give them another platform to tell their stories and to point to their work at Voices on the Gulf. This, of course, led back to work in his own classroom.

Allison’s students listened to an interview with Margaret Simon, of the National Writing Project of Acadiana, who published a young-adult novel titled Blessen, about a young girl living in post-Katrina New Orleans. His students then decided to write a book review at Youth Voices. (Simon, as it turns out, first began drafting the book during a writing marathon led by Richard Louth, director of the Southeast Louisiana Writing Project.)

These interconnections between the various strands that have supported Allison’s personal and professional inquiry over the years don’t surprise him. Allison sees his work with the Writing Project, for instance, as providing the kinds of people and technology infrastructures that have led to rich, interwoven experiences—with TTT at the center.

Despite the goal of experimenting with technologies to then use in the classroom, replication has always presented a challenge. Even today, as the program has moved from Skype to Google+ hangouts and recorded video, the barriers to using free tools to capture, then syndicate conversations remain high.

Undaunted, Allison describes the backend work, as well as the editing involved in making a podcast archive of each and every one of the nearly 300 TTT episodes, as his “art.”

He recalls a conversation he had with his son recently, who asked him one night what he was doing. “I said I have work to do. He said, ‘Oh, you editing?’ and, of course, I was editing.”

This originally appeared on nwp.org.