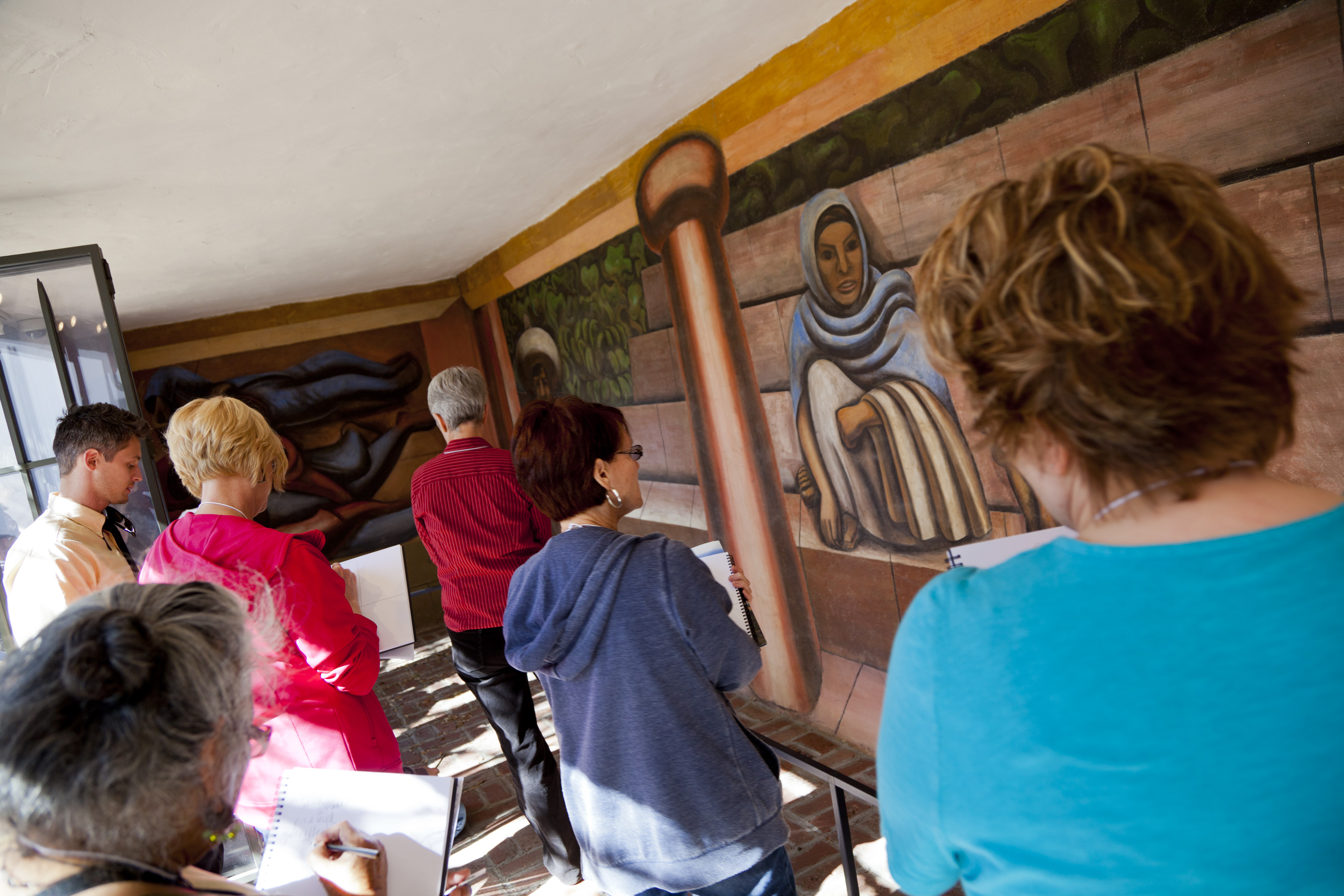 “Human beings construct meaning as spiders make webs…This is how we survive, our primary evolutionary business. We differ from other species in that clusters of human beings have constructed alternative visions to be passed on, often reshaping them in the passing. We live, more than any previous generation, in an era where these visions meet, each potentially compensating for the blind spots of the other…What would it be like to have not only color vision but culture vision, the ability to see the multiple worlds of others?” (Bateson, 1994, p. 51 – 52)

Over three short, yet powerfully transformational days, teacher leaders from 4 National Writing Project sites and two art museums embarked on a process of socially-constructing an intentional professional learning culture of innovation where museum and cultural places became spaces meant to be accessed, navigated, interacted with and learned from. This resource curates the 3-day experience, as we make visible the seeming invisible aspect of just how a community of learners is socially-constructed by its participants in and through its activities. We highlight the processes and protocols we developed with which we came to know ourselves as teacher leaders who innovate, which led us to intentionally harness our culture-in-the-making. From examining our intentionality, it is our hope to make visible to communities of practice wishing to construct intentional communities; ones that study themselves while they are in the process of co-constructing themselves.

For the past seven years, the Cultural Landscape Collaboratory, (CoLab  www.ourCoLab.org ) – a human-centered and design-centric research driven professional learning community involving National Writing Project sites, has offered teachers from diverse backgrounds, educational levels, and distance, an opportunity to learn with and from one another In July 2011 the CoLab held a three day Advanced Summer Institute of the Arts ( ASIA I), at the Saint Louis Museum of Art (SLAM). ASIA 1 participants engaged in a focused and intensive experimental workshop that integrated creative confidence, literacies learning, and visual and dramatic arts as key elements to support classroom and community based learning.

Harnessing the CoLab’s ResponsiveDesign approach, one of the goals of this three day institute was to” explore, innovative cultural practices that promote complex 21st century literacies, envision these new approaches to support local sites, and enact prototypes of these models for implementation in local contexts,” according to Ralph Córdova, CoLab director. The Santa Barbara Museum of Art, the Santa Barbara Presidio, and the city of Santa Barbara itself will serve as Cultural Landscapes for these explorations.

A second goal for the ASIA II participants was to work closely with Patsy Hicks, Director of Education at SBMA to consider how best to create equitable, accessible learning experiences for the English Language Learner community in a cultural landscape setting like a museum. Using the museum gallery exhibits, and its numerous resources, ASIA II participants also helped to plan a museum exploration night for English Language Learners and their families scheduled for March 2012 at SBMA.

We share a brief synopsis of the three-day experience, attending in depth to aspects we believe were essential in facilitating the co-construction of our Innovation-focused NWP/CoLab/Museum learning community.

1. We met at the McMormick House just a 10 minute’s walk from the Santa Barbara Museum of Art. Here, we would begin our explorations prior to approaching the actual museum. After welcomes and introductions by Tim Dewar and Patsy Hicks, Ralph Córdova and Mike Murawski, and, ASIA2 SCWriP Co-Director Nicole Schon and Judy Hug.

Around 9:15am, we began with a typical Quick-Write for all attending:

We all have had diverse “entry points” to the work we’re doing today. Some of us dating of us dating back to 2004, while others joining us for the first time. Why a museum for learning? What do you hope to have answered or to explore during these three days?

We began the process of sharing after five minutes of writing. 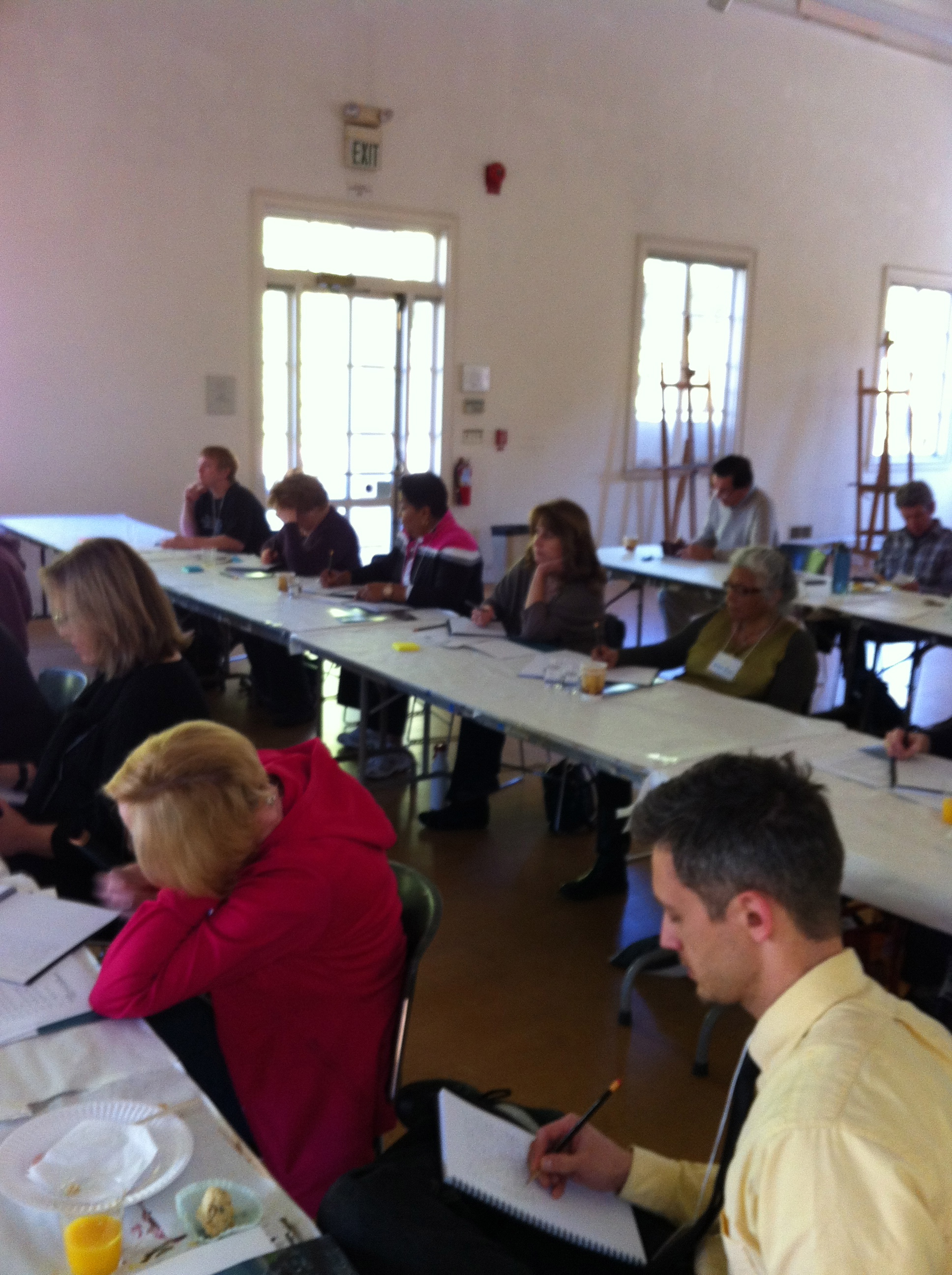 Rich perspectives emerged after folks literally read their Quick-Write to one another, and, then began to share out:

“Bringing art into the whole community, rather than being static.”

“Any kind of museum or place is a location for learning.”

“Museums (or any space) can become portals for learning.”

“Juxtaposing difference can help us see with new eyes.”

“Perceptions of elitism — how do we open up those spaces for broader accessibility?”

This individual-to-pair-to-collective, part-to-whole relationship would become a salient cultural practice within each activity, and, across the three days.

2. At 9:45am, the CoLab’s theory of Action, ResponsiveDesign began to become the process we would use to in order to co-develop shared mindsets focused on innovation, and, seeing with new eyes to make visible the seeming invisible. Our ResponsiveDesign theory of action emerged over the past 3 years of our Piasa Bluffs learning to name the ways in which we think about composing, inquiring, and, innovating.We wanted to publicly test our theory of action as applied to our NWP/Cross-Sites/Museum as cultural landscapes work. We wanted to test the adaptability of ResponsiveDesign when applied to how to envision museum innovations; innovations to site-based work; developing empathy in order to create customized professional development; and what could make for ideal museum learning. Really, we took a “what if?” approach, and ran with it.

Rather than giving everyone the infographic of ResponsiveDesign, we invited participants to “unpack” what Explore, Envision & Enact meant to them in pairs. First, each individual listed 4-6 words they associated with Explore, then they paired up. Science writer Steven Johnson’s idea about sharing ideas as opportunities for “those ideas to have sex” was referenced to explain that the individual’s ideas were like her DNA, and, she was about to share that with someone else, and borrow from her partner’s in order to develop broader and more diverse ways of knowing. In this way, the pair became a little “organism” whose job was to make sense of the 3E’s relevance to itself and its work in the world. This process was repeated three times to unpack each of the 3E’s. a After the little organisms completed their associations with explore, envision, enact, they were to morph into groups of 4, to further share their DNA’s merging the knowledge of Explore, Envision, Enact. This time, their task was to develop a visual representation of the relationship among the 3E’s.

We heard from five difference groups, each with its own articulation of the 3E’s. Once the representations were shared, we engaged in a systematic debriefing process where we worked through articulating the significance of guiding groups to develop shared knowledge of ResponsiveDesign, rather than just foisting it upon people as the theory we would be using.

3. Around 10:15am Judy Hug guided us in an “Inquiry Into My Practice” (IIMP) called the “Artifact Exploration,” involving each participant curating artifacts s/he brought with them that tell elements of who they are. We all took about 3 minutes to curate our items at our working spaces, thus making them into a “studio” for our “temporary installations.” This was followed by a “Gallery Walk” whereby each of us wandered around, silently with Post-It Notes and pens in hand, and we interacted with (and learned from) people’s artifacts by leaving on the Post-It notes, a “Noticing” and a “Wondering;” Post-It’s left adhered to the items we observed. After about 10 minutes of the Gallery Walk, we all returned to our curated space to find numerous Post-It’s left by our visitors, and we read through them, selected the most compelling, and had that become the focal point to which we would write an extended piece. We then paired up and shared the writings. In this way, this third “technology” we harnessed built upon the morning’s early technologies used: Quick-Write (done individually, shared in pairs, and then shared collectively) and the Unpacking of Responsive Design (done as individuals, then in pairs and then groups of 4, and then collectively shared). Slowly, but observably poignantly, this third exploration had harnessed and focused our thinking as a community, as we harnessed it, as we began the process of socially constructing ourselves as explorers, envisioners and enactors.

4. We began to embark in a process, built upon our earlier Quick-Write on why a museum, the articulations of ResponsiveDesign as a theory of action, and Curating Ourselves with our Artifacts, we tackled what constitutes interdisciplinary approaches to interact with and learn from phenomena like museums settings, classrooms, and even school-based content. We broke up into 6 different groups, each with a particular identity: writer, reader, mathematician, scientist, social scientist and artist. Each group was to ideate first as individuals as many actions/verbs that came to mind regarding their identity. From there, they then created a collective list, which they were then to pair down to the ‘top 5 essential’ verbs for that particular identity. Each group wrote each of its 5 verbs on a set of colored paper (each identity had a different color).

Then we engaged in invoking a technology we call the Interdisciplinary Mash-Up. Each group was to place their verbs face up in the center of the room, which all participants forming a circle around the 30 multicolored verbs. Then in silence, we were to create a mind-map or cluster of relationships among those verbs.

After, about 8 minutes of sorting, and shifting, and resorting, the discrete verbs particular to each discipline moved around the room as ‘kneaded and reworked’ by the participants. Participants were then asked to notice what happened and then explain what it means.

After partners discussed what they noticed and what the processes suggests about learning, we engaged in a larger conversation around the interdisciplinary processes, salient functions of interdisciplinary actions, and the particular forms those actions take within a particular discipline. We began a discussion on how the work we do within and outside of schools with each other as teachers and with our students should have a focus on these interdisciplinary actions, and, the powerful work we do with students must include opportunities for them to look back upon learning experiences and learn to notice and name the actions they had engaged in and with in order to make meaning.

What emerged that morning was an intentional emergence of understanding that involved us becoming one community with a purpose to make visible what each of us knew; knowledge and practices we’ve developed in our respective cultural landscapes past and present; and harnessing familiar yet improvised literate and cultural practices as “technologies” in order to become this temporal and focused community of ASIA2 Innovators. From the rich and diverse discrete individuals that we were, just 3 hours into the morning, we had already 1. developed a shared purposes; 2. unpacked and conceptual understandings of ResponsiveDesign; 3. shared understandings respecting each other’s lived experiences as wells of wisdom, and 4. intellectually and kinesthetically began the process of making visible the functions and forms of interdisciplinary actions as human-centered practices that both were evident in all that we did that morning, but also would foreshadow the new cultural practices that Mike Murawski would introduce us to in the afternoon at the Santa Barbara Museum of Art.

Openly Networked Learning in and Across Art Museums

I recently made an inspiring trip to Washington DC...
by Mia Zamora