“Taking the Zombie-like Expression Off of Student Faces…Using Zombies”

Bloodshot eyes. Deadpan, drooling faces. Communicating in shrugs, grunts, and moans. This is not a scene from the popular AMC zombie-drama “The Walking Dead,” but a typical scene from many classrooms across the country. In the technological, fast-paced, ever-changing, social media-based society we live in, educators are constantly struggling to keep students interested in what is happening in the classroom. How can we change what we do in the classroom to get students excited about their work? Before we examine how I came to try conquering the challenge of creating interest-driven projects, let’s look at how I got here. (We will come back to the idea of zombies later!)

The first year teaching at E.B. Aycock Middle School was a great learning experience for me. Being from suburban Philadelphia, when I graduated college I was literally “one in a million” recent college graduates competing for single openings in my content area in the few affluent, high performing school districts surrounding the city. Even the School District of Philadelphia stopped accepting applications due to budgeting restrictions. In a flooded market with districts cutting positions rather than hiring, I was ready for a change. When a friend of mine from college (who had moved to eastern North Carolina a year before) told me of an opening at E.B. Aycock, I applied, was hired, and moved from PA to NC all within 4 days. E.B. Aycock is a low income, low performing school with limited physical resources but a great staff and people resources.

In September of 2013, my second year at E.B. Aycock Middle School, I was asked to take part in the Tar River Writing Project. Using MOOC’s, makes, and online collaboration, I was exposed to something called “connect learning.” We explored various ways to tie multiple disciplines into my own (Social Studies), new resources and technologies to use in the classroom, and how to get feedback to students and from colleagues in various ways. This was the perfect place to get some new ideas to revamp my lesson and focus on project-based learning in the classroom. One of the make-cycles we worked on was creating a “User Guide.” In these User Guides, I created a Bit-Strip Comic that explained who I am, what you need to get along with me, and how to survive being around me (check mine out HERE!).

Sixth grade students, especially boys, love talking about the blood, guts, and gore of zombies. “The Walking Dead” was a frequent topic of discussion in homeroom on Monday mornings. I saw several students reading “The Zombie Survival Guide” after they completed their work or were transitioning. Movies and video games popular with their age (although rated “M” for mature) were all about zombies. When I started making connections between these pop culture references and the actual events and circumstances during the Bubonic Plague, I had their undivided attention. It was a perfect opportunity to roll out the idea of a guide into my unit on the Bubonic Plague. I decided to “hack” the User Guides we made in the TRWP and have my students create Survival Guides for the Bubonic Plague.

I told students that they could create a survival guide in whatever way you want: digitally, on paper, on poster, etc. as long as you meet the requirements that are in the rubric.” Requirements included signs and symptoms, causes of the disease, reactions to the disease, etc. I wanted students to use their high interest in the topic and use that excitement to create their project in whatever way they wanted. A majority of them got on their Chromebooks and instinctively went to “Create: Google Presentation.” Some students let their creativity flow into hard copy projects. One student took brown paper bags, stitched them together with a leather strip, and burned the outer edges to make it look like it was an authentic primary document. Inside the document, the student dedicated a page to each of the requirements listed in the rubric and wrote from the perspective of a doctor from the Bubonic Plague which we had analyzed in class.  Another student created a “museum exhibit” atop a box turned upside down. On top of the box they created a scene of a town in the middle ages and what it looked like during the plague: open mass graves, people avoiding others, homes boarded up, etc). On the 4 sides of the box, the student included their writing broken up into different parts. I was ecstatic about how letting their interest and excitement in the topic translated into high interest and beautiful, meaningful work.

One of my proudest moments of the project was the moment I realized that this interest-driven, project based learning was successful for students of all achievement levels. I am going to detail an example from two students in my class. Student “A” is a high level, intelligent student who frequently goes above and beyond on assignments. Student “B” has an average IQ but his ability to perform at a high level is significantly lower than others, struggling with reading and written expression in particular. As I was reading projects from these two students I realized that they both understood how the Bubonic Plague was spread, they just had different ways of expressing it. 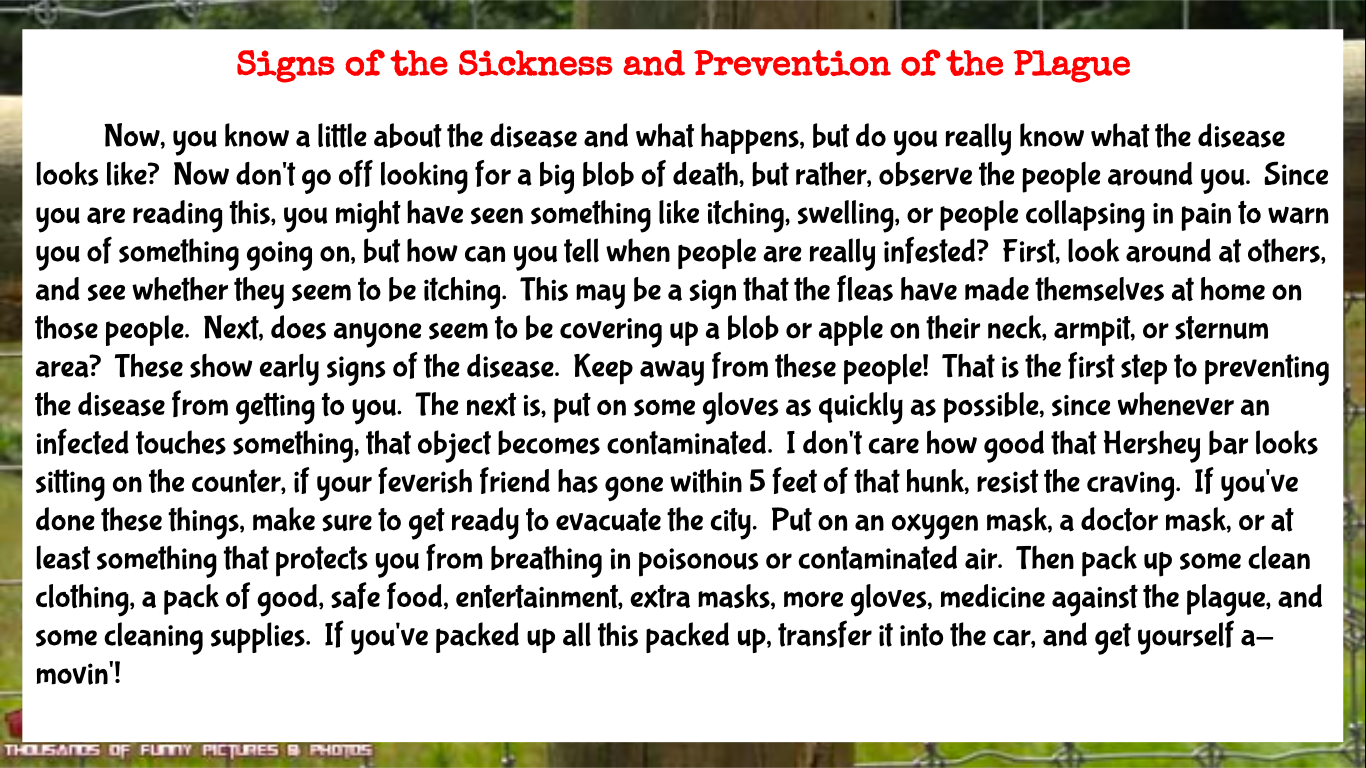 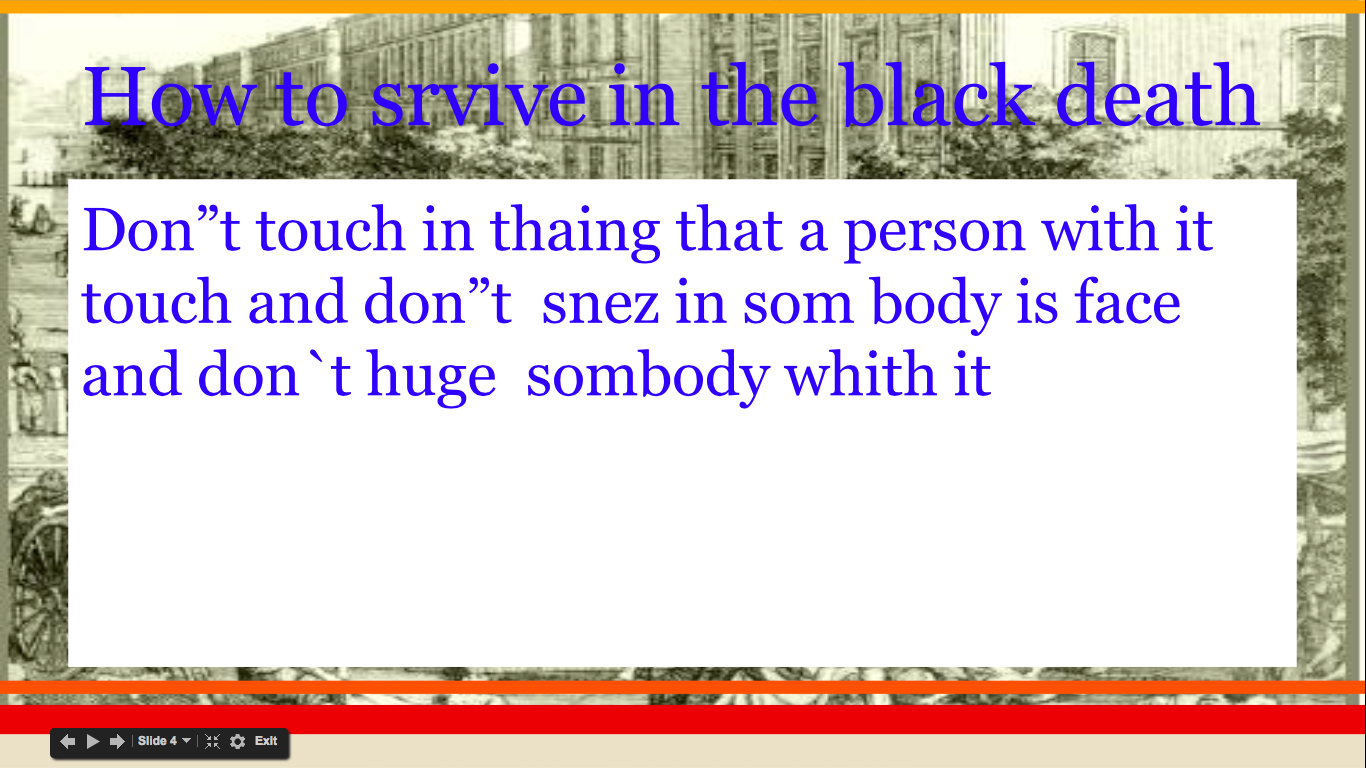 Through the conversations we had in class while working on these projects, it was clear to me that both students were excited about the content. The gross nature of the symptoms and how we compared life during the Plague to a zombie apocalypse had stuck with them. Looking at the screenshots from the two students’ projects, the most obvious point at first glance is that “Student A” was a more inclined writer, using a vast vocabulary and elaborating in depth on the disease. “Student B,” while not as strong of a writer, and after some deciphering on my end, had as strong a grasp on the spread of the Bubonic Plague as the other student. Had this been a simple reading and writing exercise with a worksheet, Student A would have no problem but Student B would most likely have been disinterested and given up due to his struggles in reading and written expression. The interest-driven project and connection to the “un-dead” had brought their projects to life!

Turning the deadpan faces, bloodshot eyes, and grunting shrugs into excitement, enthusiasm, and the want to create a great project is possible in many different ways. For this beginning teacher, the connected learning program offered through the Tar River Writing Project gave me the tools, ideas, and support to bring interest-driven projects into the classroom and have my students take ownership over their education. It was just as much a learning experience for me as it was for my students, and even I feel like less of a zombie while I create my lessons.

From Professional Development to Professional Practice: The SEEDs of Connected Learning in a High Need Middle School
by Stephanie West-Puckett