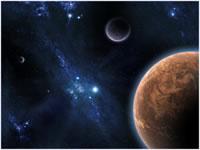 Overview: The original version of The War of the Worlds radio news bulletin was aired on October 30, 1938 by Orson Welles. I was intrigued by the idea that the machines were destroyed by the Earth’s viruses, which is now a widespread topic in our increasing technological world. This led me to have a discussion with my students on the topic of computer viruses and ways to change the problem before we began the project. The broadcast occurred at the end of Great Depression and pre-World War II. The economic structure of the US was weakened at that time. These conditions have resurfaced during the uncertain economic times in 2009. We learn from the past and strive to make our future better and this is the audacity of the project. Indeed, history returns!

This project enables teachers to connect creative writing, technology and history. In this way, it brings new opportunities for learners, especially when they are asked to write about something that has not happened yet. The cycles of predicting the future involves researching the past, connecting facts to the present in order to develop a futuristic story. In doing the project, students are writing and recording. They are also using computers for research and interacting with web-based programs.

The trust of the teacher is vital for students to be independent in their choice of envisioning a topic for their futuristic story. The application of creativity goes beyond some of the traditional ways of gathering and presenting information to be shared with others. The process is authentic and reaches a variety of learning styles for learners to express themselves independently and in groups. After all, it is the creative ideas and concepts that fuel new concepts in learning and our society.

INQUIRY
The spark for my inquiry resulted from a documentary I viewed on Orson Welles. I was intriqued by the technological connections between the humans and robots. Additionally, I am a native of New Jersey where the original broadcast about the ‘War of the Worlds’ occurred. My professional and personal connections led to this inquiry project for my student’s to predict their own future.

Project Overview:
This project is a part of the read/write component which enhanced the overall curriculum in my Computer Applications classes. The goal of the writing unit is to empower all students to the level of powerful literacy. Students explored the context of literacy learning with technology. They gathered and applied conventions of text and audio to support their understandings of diversified skills in the twenty-first century. Two high school classes, consisting mostly of ninth grade students saw opportunities to ‘step out of the box’ in learning and imagined what life would be like in the year 2034. The project began as a unit based on the audio version of ‘War of the Worlds.’ It seemed appropriate as a teacher to provide students an outline of the many elements comprising the story and play the original broadcast of the War of the Worlds which was narrated by Orson Welles in 1938. Initially, students worked individually and progressed to teams when technology and writing came into play for their stories. From my perspective, I saw this as an opportunity to teach and discuss computer ethics, proper researching techniques to recording stories with a digital recorder with my classes.

Process:
Students used computers for research, listening to the original version of the ‘War of the Worlds’ on CD, which also included a vocabulary lesson on decoding key words.  Each student was provided a brainstorming sheet for their own idea. They had to write out their ideas. I reviewed each of my students’ ideas and grouped students (2-3 per story) based on their similar brainstorming concepts. Each class appeared comfortable with their assigned partners and immediately began to discuss their ideas into a more defined concept. Group members rotated responsibilities in researching and redeveloping a story of the future consisting of at least 120 words (approximately one minute of recording). There was a dynamic connection as group members applied their creativity in writing their futuristic story of 2034. Each group practiced reading their story to the class prior to the final digital recording.  Students practiced several times with the digital recorder and listed their track so I could easily find and convert their story from .zvr to .mp3 format for the web.
Open WOW_brainstorm_sheet.docx
Open WOW_brainstorm_sheet_PDF_Version.pdf

Student Assessments:
Thirty-four students in my two classes completed a survey on the reading, writing and technological processes of this unit. Each class rated individual components of the unit. The digital recording ranked highest amongst the surveys while the class averages were above average in the enjoyment of the project. Technology does promote creative behavior and this is demonstrated by my students’ feedback. The written story was the most difficult for all classes. When asked what they would do differently with the War of the Worlds project, they responded:

Self-Assessment:
This is the second time I implemented this project in my Computer Application classes. The project involved many aspects in learning such as research, writing, technology, creativity and critical thinking. The goal of the lessons was to provide diviersified initiatives with a variety of digital tools in order to prepare a holistic writing sample for the unit. This project enabled students to take a more active role in learning.

The root word exercise provided a primary resource for students to practice from a website that provided instantaneous feedback to students. Learning with computers offered students the opportunity to read, respond and reinforce their understanding of words in a non-intimidating manner. Although students worked individually, students seated nearby assisted their peers. This led to a collaboration amongst learners as they completed a variety of levels in root word development and the onset of the writing process.

Students worked individually researching different types of technology. They demonstrated interest in their chosen topics and uploaded their work to a network folder. I commented on their idea and grouped students’ in teams of two or three based on their topics. Secondly, the teams were introduced to five academic standards based on the impact of technology on society. The team used computers to enhance their knowledge of technology, type a title and abstract for their story. Upon approval, the teams continued to write their one-minute scripts prior to recording their story of the future. All teams became active participants with the digital recorders and this is evident with my students’ favorable responses with recording their final story with the digital recorder.

The ‘War of the Worlds’ CD lesson was the most difficult part of the unit. Students had difficulty listening and writing facts from what they heard into a word processing program. Despite the overwhelming popularity of mp3 players and I-Pods amongst teenagers, most had difficulty with this lesson because they are used to listening only to music. Learning to listen for content and key words was a challenge. One team used sound as a background introduction and for emphasis. This should be kept to a minimum so as to not distract from the narrative. Writing from drafts, the final copy, practicing and recording their work was the most dynamic part of the unit. All teams worked cooperatively and collaborately during this phase of the project. It was definitely a teachable moment for me.

I plan to incorporate other disciplines into the curriculum in future units and involve parents in the process. I foresee team teaching this unit with a Social Studies and/or Science teacher in the future. This webpage will be uploaded to my school website. This project could also be applied to online publishing sites such as blogs and wikis. These partipatory tools present authentic and meaningful opportunities for my students to share and obtain feedback with others outside of the classroom.

This student radio broadcast predicts how technology will improve society in the year 2034.
Open Future1_0.mp3

This radio broadcast recorded by students takes another perspective on the increased use of computers in the future.
Open future2.mp3

(This is part of the Slice of Life Challenge with Two Writing...
by Kevin Hodgson

One way to become "crazy good at the internet" is to hang out with folks who...
by Kim Jaxon

[This is part of a larger conversation I have been having with Kevin Hodgson...
by Anna Smith

Podcasts as practice and presentation

Podcasts give English language learners a nonthreatening...
by Robert Rivera-Amezola

(This is part of the Slice of Life Challenge with Two Writing...
by Kevin Hodgson

One way to become "crazy good at the internet" is to hang out with folks who...
by Kim Jaxon
See All Posts
Collection