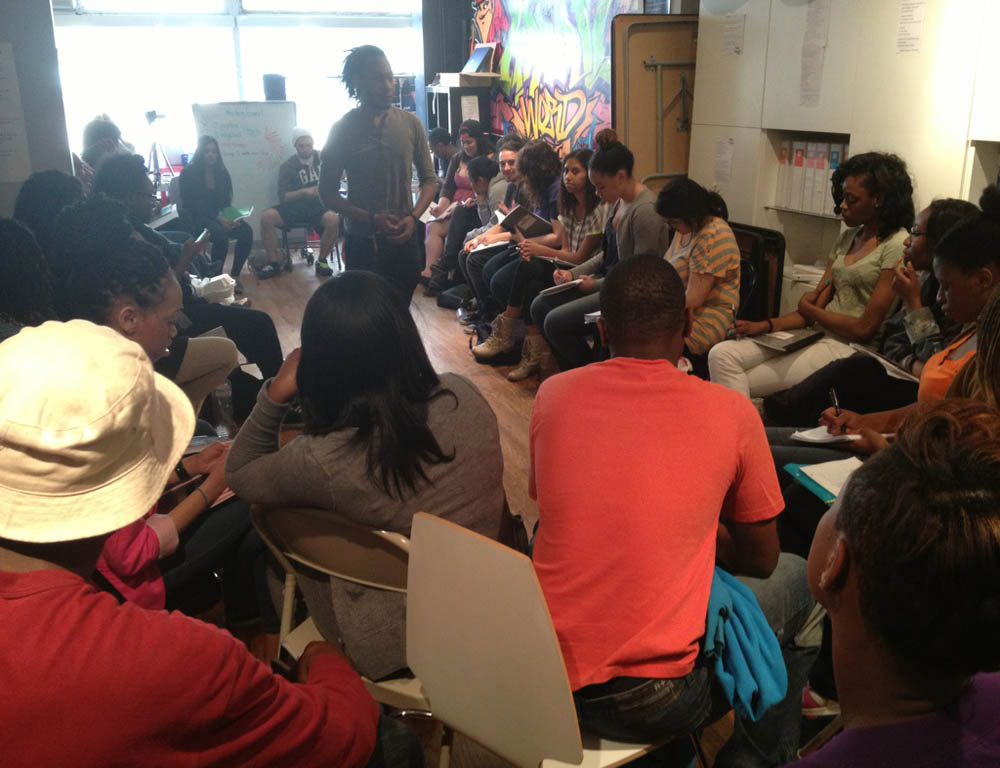 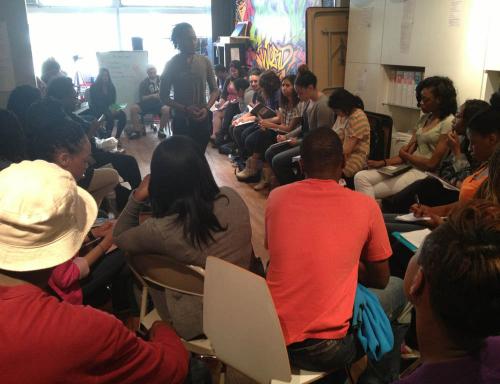 Caption: Streaming the workshops have opened a new channel for engagment and learning

The Digital Divide is a problem that grows daily as the technology advances but the access to these tools and resources become increasingly sparce.  While these youth are rapidly learning more about writing and performing spoken word, the pages they write on have changed, thus Urban Word has had to evolve with the digital era and become accessible online with a constant presence to increase digital participation.

Digital media has changed how the youth create, lead, read, write, perform, and engage for the better. Founded on the belief that teens can and must speak for themselves, Urban Word NYC, has been at the forefront of the youth spoken word scene, poetry and hip-hop movements since 1999. Moving forward we wish to further our youth development programs with the most progressive trends in student-centered pedagogy, connected learning and inquiry-based classrooms. 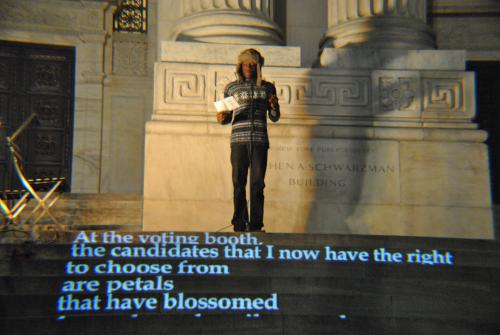 Urban Word poet David Fasanya stands on top of his verses at the NY Public Library on November 19, 2012. This Words on Walls events featured poems that raised voter awareness and the importance of civic engagement.

Urban Word NYC, along with partners City Lore and Bowery Arts & Science, recently culminated the first year of the NY Community Trust/Hive-supported WORDS ON WALLS program, during the New Museum’s “Ideas City” Festival. WORDS ON WALLS is a collaborative performance of music and spoken word along with poetry projections by the POEMobile. The POEMobile is a beautifully hand-painted truck covered in the calligraphy of multilingual poetry that houses an innovative, open-air text projection system. Illuminated verses lit up Mulberry Street as Urban Word’s powerful teen poets, along with special guests, explored IDEAS CITY’s Festival theme of Untapped Capital through poems on words unspoken, hidden connections, and invisible cities. This photo essay captures some highlights from a year of illuminated verses from teen poets across the city. Teens worked with various software and customized programs to not only layout their poems on a variety of surfaces, but also to make them move, disappear and in some cases explode! 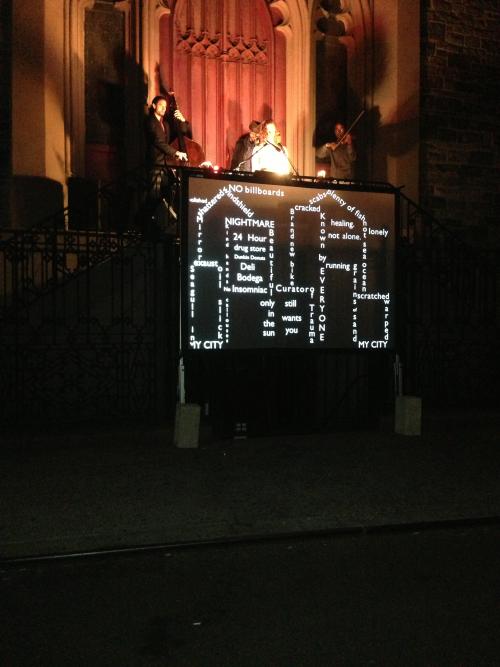 Caption: Urban Word NYC poet Carol Brown performs her poem, “Foundations” at the Ideas City Festival. The lines of her poem created a skyline as she performs them!

Caption: Urban Word poet Gabriel Barralaga performing “To the Women” in Tribeca in front of Treasure & Bond on October 20, 2012. Treasure & Bond is a retail store that gives all of its proceeds to charity, and Urban Word NYC is a recent recipient. Poets used the various facades of the store to show off their powerful poems. 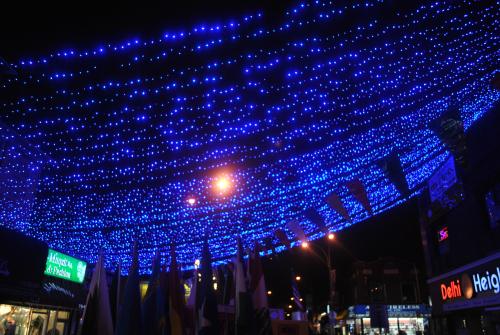 Caption: All of the lights! The Words on Walls event in Jackson Heights on the Muslim holiday of Eid (October 26, 2012) was a highlight of this year’s program drawing more than 250 audience members. We filled Diversity Plaza with the voices of young poets, and community leaders and performers, and Shaheen Sweets provided free snacks and sweets. 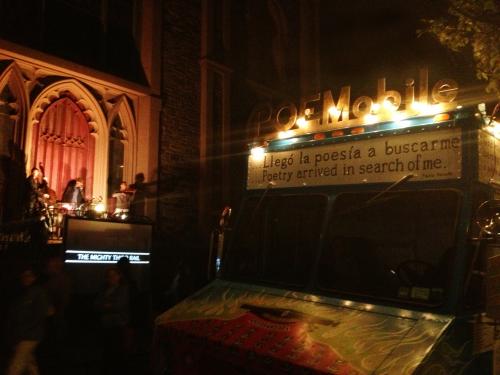 Caption: City Lore’s PoeMobile set up for the New Museum’s “Idea City” to illuminate the verses from the young poets of Urban Word NYC, with special guests the phenomenal Might Third Rail.

The Urban Word Live program represents the very first time that we have live-streamed a workshop from Urban Word to the WORLD. Urban Word Live caters not only to teens who cannot make it in person to attend the workshop but also to those who wish to engage in writing and performance activities at their leisure. This experience, we’ve found, gives teens a “pressure free” environment behind the screen to share without intimidation. The youth who attend the workshop, in person or digitally, also get to share their original work online, accessing an authentic audience that they can collaborate and share with.

This initiative also engages youth in multiple leadership capacities and skills development. For instance, the activities that engage the online participants are moderated by the youth at Urban Word. Using Facebook and Twitter, our Digital Media Team sends out weekly prompts, informative links, articles and pictures. These prompts are inspired by the workshops and conversations that happen in the chat room during the workshops andby the mentors facilitating them. These appointed youth provide praise, comments, and suggestions that will make the written or performed work stronger, while also building community. 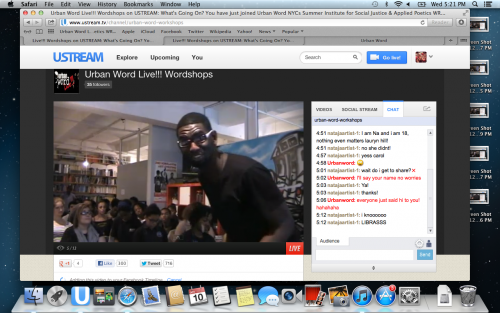 Here are some testimonies from the youth leaders on our Digital Media Team:

“The process with life-stream was both a difficult yet rewarding process. It was difficult when it came to the idea of setting up the program. Sometimes it went in and out, or it would randomly delay before starting. After, the process would go pretty smoothly unless the camera starts glitching. The only true issues I have is the point that it needs to be promoted more. There’s not enough viewers on life stream, needs to be promoted on the Urban Word page before the workshop begins.”

“As a Youth Board member, one of my responsibilities over the year was to run the live stream portion of our workshops. This was extremely enjoyable and I was glad that our media specialist switched to a program called Wirecast. I wasn’t very fond of using UStream for the delays and commercials. This experience has taught me useful technological skills as well as camera control. I personally thought it was revolutionary to share our workshops at Urban Word NYC across the Internet in order to reach a greater audience. Technology keeps our society stay interactive and this helps the youth experience our workshops if they unfortunately are unable to come to our Urban Word office.”

Digital Dialogue with the UK

In an international effort to establish a digital collaboration, Young Identity was an idea created to pilot, connect and explore digital poetry performances/slams.

Young Identity was a digital international youth exchange between Urban Word NYC, Young Identity, Contact Theater, and the Culture Hub. The program called for a group of six youth to collaborate on a group poetry piece and performance that was simulcast live at Shake the Dust, the UK’s national youth poetry slam competition. Over the course of five weeks using Skype, a Facebook Group and Google Docs; Young Identity and Urban Word conducting writing workshops to brainstorm, and create a group piece with the youth from the UK.

This collaborative piece was facilitated through simulcast technology located at Contact Theater and the Culture Hub in New York. Simulcast is the ability for two separate locations to video conference real time. This type of technology was not exclusive to this partnership, but is unique in the way it was used (two sets of performers being viewed simultaneously to a third party audience).

One of these performers was Marlon Cadore. When this Urban Word poet and 2012 Youth Board Member was asked about his experience on this project his reply was:

“…at first we had meeting at the office and had to figure out communications with Skype and everything and write poems via Skype which was a weird but interesting experience. When it came time to be in the space where we would be streamed performing that was incredible because I never did anything like that and I was performing for people across the world and it was only my second group piece so I was nervous. All in all it was awesome because I love the cats we performed with and talking to Keke and everyone and I kind of miss all of them enough to want to go over there and experience poetry over there.”

Footage of the Urban Word youth performing projected behind youth of Young Identity simultaneously to a live studio audio audience was recorded and also livestreamed. Watch how it call came out here.

Textual Power on Our Own Terms: Remixing Literacy in Out-of-School Spaces
by Danielle Filipiak