“This generation has always existed in a world where media and
intellectual property don’t have the same gravity,” said Ms. Brookover,
who at 31 is older than most undergraduates. “When you’re sitting at
your computer, it’s the same machine you’ve downloaded music with,
possibly illegally, the same machine you streamed videos for free that
showed on HBO last night.” 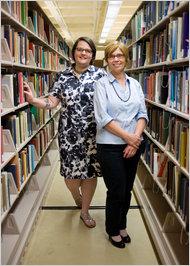 As any teacher who has assigned a research paper is well aware, plagiarism is growing in both frequency and degree in recent years. New York Times writer Trip Gabriel addresses this occurrence here, pointing the finger at several social and developmental byproducts of the Internet age.
Through interviews conducted at universities across the country with both faculty and students alike, Gabriel has narrowed the cause of this plagiarism down to a few key possibilities:

• Due to the proliferation of peer-constructed or “Web 2.0” websites such as Wikipedia, topical information is often discounted as common knowledge (an amorphous term in itself) and thereby undeserving of credit.

• This is a generation weaned on the illegal downloading of music, television, film, and other media, and thus views copyrighted text in the same light.

• The fault lies in the inability of middle and high school teachers to impart the basics of research and citation to their students.

While his findings are undoubtedly controversial, there is an increasing urgency to discuss the concept of digital plagiarism as a generational byproduct.

I am researching research. I know, it all sounds very meta. But following my tenth grade E...
by Jennifer Ward

The original posting can be viewed here. In c...
by David Baroody