Notes and Knots from the Trailing Edge

“That simple,” I thought to myself, teetering on the edge of the digital divide.

“Well, I have this Wang,” I said trying to act like I knew what I was doing.

I stared at my colleague, who had been coming weekly with me to this new computer store in the East Village.   We decided to go there every Thursday after lunch to figure out what this personal computer-thing was all about.  We figured:   we’re expert learners; we can unpack this computer-thing if we work together.  All we need to do is show up and get into the conversation, not be afraid and seem outsiders, just act like we know what we are doing, pick up some of the lingo, get those concepts down– we can figure it out.  We had been talking to this Tech dude for the past three Thursdays.  First week, we started out saying, “Tell us about these computers.”  We picked up a few words like “byte” and “floppy drive.”  So the next week, we practiced using those words on our walk to the computer store.  “So how many bytes does this one have?  Where’s the floppy drive? And then a new question, “Tell me about what this one can do?”  We tried to be in the language, in the conversation.

My department chair had gotten Mr. Wang to give the writing program this new PC.  It came in this refrigerator-size box, so I told the delivery man just to leave it outside my office door.  It stayed there; no one took it.  It seemed that no person had any idea what to do with it.

“At least, unpack it,” my colleague said.

The Wang didn’t look like a match for my IBM Selectric typewriter, no way to insert paper to type, no instructions.  “Let’s just plug it in,” I said to my colleague and see what happens.

It was another year before I bought my first computer—a silver and blue Kapro portable with a 5 inch screen.  I wasn’t sure what I was doing; I just knew I needed to do something.

It’s like, “If Lil gets it, surely 3rd graders can.”   I remain amazed at the ease with which composing becomes possible.

Tony comes to a site meeting saying, “You aren’t going to believe . . . the district bought this computer program stuff called . . . and it dummies down the readings and the kids are having to do workbook-style junk based on their reading ‘levels’ and the program tracks them from day-to-day to see if they ‘improve.’  My students are unplugging the machines.  One yelled at the screen, “No, you try again!”

“It’s not the technology,” I say. “It’s what we do with it that matters.  How can we get the district to think about digital technologies differently?”

“The district,” I think to myself, the district sounds so large, so oppressive, completely overwhelming.  There are people making these decisions, not some blob I’m calling the district.”

I say to Tony, “Who is on the technology committee? If we don’t know these people, I’m sure we know teachers who know at least one of the people on that committee and we can talk to that person. Let’s see how many other TCs are up against this same issue; we can speak together, tell the committee members how we are engaging, and want to continue engaging, our students as digital composers.

I say to Cindy and Lacy with academic-ease, “Our teaching is situated within and against the larger social order where the ideas of literacy that animate our instruction have the potential to merely reproduce and justify the stratification of our culture or offer counter point to the typical story.”

Cindy and Lacy are polite and smart.  They are in the language,in the conversation, and know how to keep me in.  “Lil, we love that you are on the trailing edge of digital technology because you continually ask important questions. Are we just replicating the same old stories or can/should urban teachers tell stories that critique the dominant narratives?”

“Say, ‘critical writing practices are  complex sociocognitive interactions with the world that entail, in part, establishing and maintaining social positions, adapting to variable discursive conventions, constructing ideas and relationships for oneself and others, and understanding how technologies, Diaspora and further global integration of the economy are transforming how we conceive and perform writing.’”

“So, Lil, you keep asking us questions. Like, on my resource,”  Cindy continues, “you totally got me thinking about why I had this entire video all about ‘me’ and nothing about all the people who contributed to my learning.”

Then Lacy says, “And remember when you asked me, “What work does this narrative do? That question had me problematized for days, but it was important.  Narratives do specific work in our culture; they tell us who and how we are supposed to be.  So what happens when our stories, our lives, don’t fit into the dominant-culture story?”

I see that together we can unpack these things; we can figure this out. 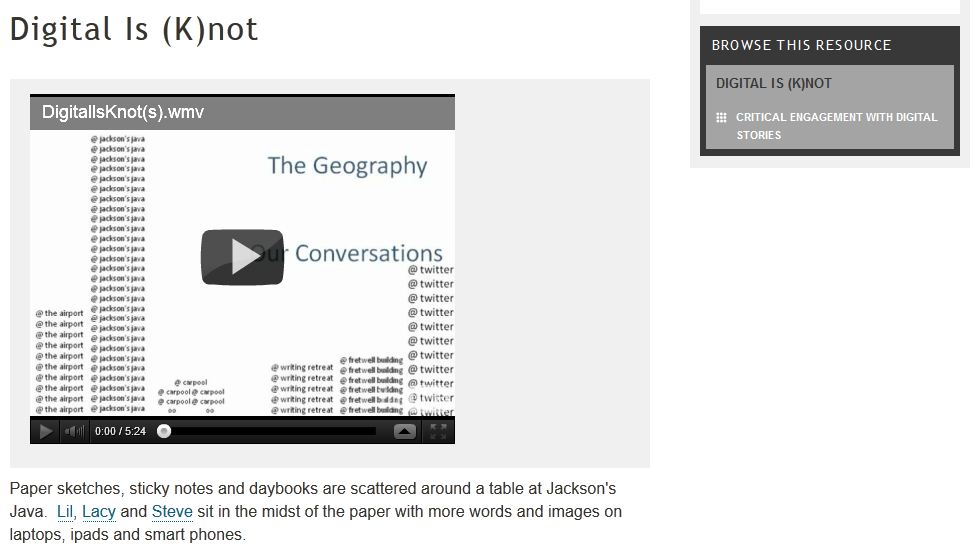 I’ve been thinking a lot this ye...
by Jennifer Woollven

By Michael Lachney (cross-posted from DML Central...
by Elyse Eidman-Aadahl

I’ve been thinking a lot this ye...
by Jennifer Woollven
See All Posts
Collection