Mary L. Gray on Information Access, Public Spaces, & Boundaries of Visibility for Queer Youth in the Rural US

As educators, we are in a unique position of both witnessing and influencing how young people come into their adult identities. Popular media portrays the rural United States as a hostile environment for the exploration of identity by lesbian, gay, bisexual, trans, and questioning (LGBTQ) students. If we understand identity as a collective creation, influenced by the individual as well as by society, then we can see how the experience of LGBTQ-identifying youth can vary greatly depending on the individual’s community. However, new media and digital technology are changing what many of us consider our local community. How do these changes affect the experience of LGBTQ youth in rural areas of the United States?

In the book Out in the Country: Youth, Media, and Queer Visibility in Rural America (2009), Mary L. Gray presents her ethnographic study of LGBTQ-identifying youth in rural Appalachia. Gray is Associate Professor of Film and Media Studies and Performance and Ethnography in the Department of Communication and Culture at Indiana University, Bloomington. The video to the right is part of the Berkman Center for Internet and Society Luncheon Series. Gray gave a half-hour talk about her study of LGBTQ youth in the rural US followed by a question and answer session.

From the Berkman Center for Internet and Society website: Mary Gray of Indiana University maps out how lesbian, gay, bisexual, trans and questioning (LGBTQ) youth and their allies make use of social media and local resources to combat the marginalization they contend with in their own communities as well as the erasure they face in popular representations of gay and lesbian life and the agendas of national gay and lesbian advocacy groups.

In her research with LGBTQ-identifying youth in rural Appalachia, Gray debunks several popular assumptions about the LGBTQ experience in the United States. The first assumption she addresses is the notion that any LGBTQ youth growing up in rural American should (and will) escape to the big city as soon as possible. The reality, according to Gray’s research, is that the majority of LGBTQ youth have neither the means nor the opportunity to relocate to a metropolitan area.

Other assumptions Gray presents: the belief that LGBTQ-identifying people have access to a critical mass, in other words, it is easy find LGBTQ groups; it is assumed that the LGBTQ community can easily raise capital for legislation or political action when needed; and many people assume that there are easily accessible “safe” spaces for LGBTQ-identifying people where it is possible to gather in a low risk and anonymous environment.

Based on her research, Mary L. Gray argues that none of these structures exist in the rural United States. Populations are too widespread for easy access to critical mass. Living in a small community means “safe” spaces are hard to come by, and anonymity is virtually impossible. And with a high incidence of poverty in rural areas, critical capital is not available. 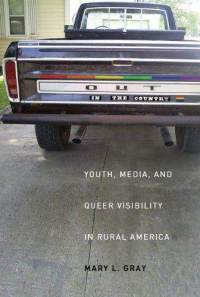 New Media Expands the Local Community, Adds another Layer to Digital Divide
Central to Gray’s discussion is the observation that young people are using media to negotiate their sexual identity. She argues that LGBTQ rural youth rely on the “blurring of online/offline social visibility” as a way to combat digital inequalities and assumptions about the LGBTQ experience in the rural US.

In her talk, Gray presents examples of how LGBTQ youth use media and Internet to expand “boundary publics” – or safe spaces – and to document their presence and visibility. She shows that digital media help rural youth create local belonging and navigate the exploration of sexual identity in ways unavailiable without the technology.

With this understanding of the value of digital media in the lives of LGBTQ rural youth, Gray then turns the conversation to issues of digital inequality. She discusses inequality for rural youth in terms of access, skill, autonomy of use, social support, and the purposes for which technology is employed.

This is where the importance of teachers of rural LGBTQ youth comes to the forefront. Often in rural areas, students only have access to the Internet at school. Gray feels we must acknowledge that when students are online, it is not necessarily just “play time.” We are responsible for giving students the room to negotiate their adult identities. And we are in positions of power to allow or not allow that exploration.

Gray gives an example of a librarian who recognized students’ need for more privacy when using the library computers. By simply repositioning the computer monitors, the librarian gave LGBTQ students a safer space for accessing information and community.

More on Mary L. Gray’s Work
Books:
In Your Face: Stories from the Lives of Queer Youth (1999)
Youth, Media, and Queer Visibility in Rural America (2009)

Who Am I? Youth Identity Online
How do youth explore and express identity online? How can educators support students as they work through this stage of d...
by Erin Wilkey Oh

Too Much Stuff..Help Today’s Students Navigate Their Identities Through Their Stuff

hold up, it ain’t exactly free. [ruminations on the digital divide]

The Art of Juggling Voices

(This is reposted from my blog) Last week, I had the pleasure of taking part...
by Kevin Hodgson

Too Much Stuff..Help Today’s Students Navigate Their Identities Through Their Stuff