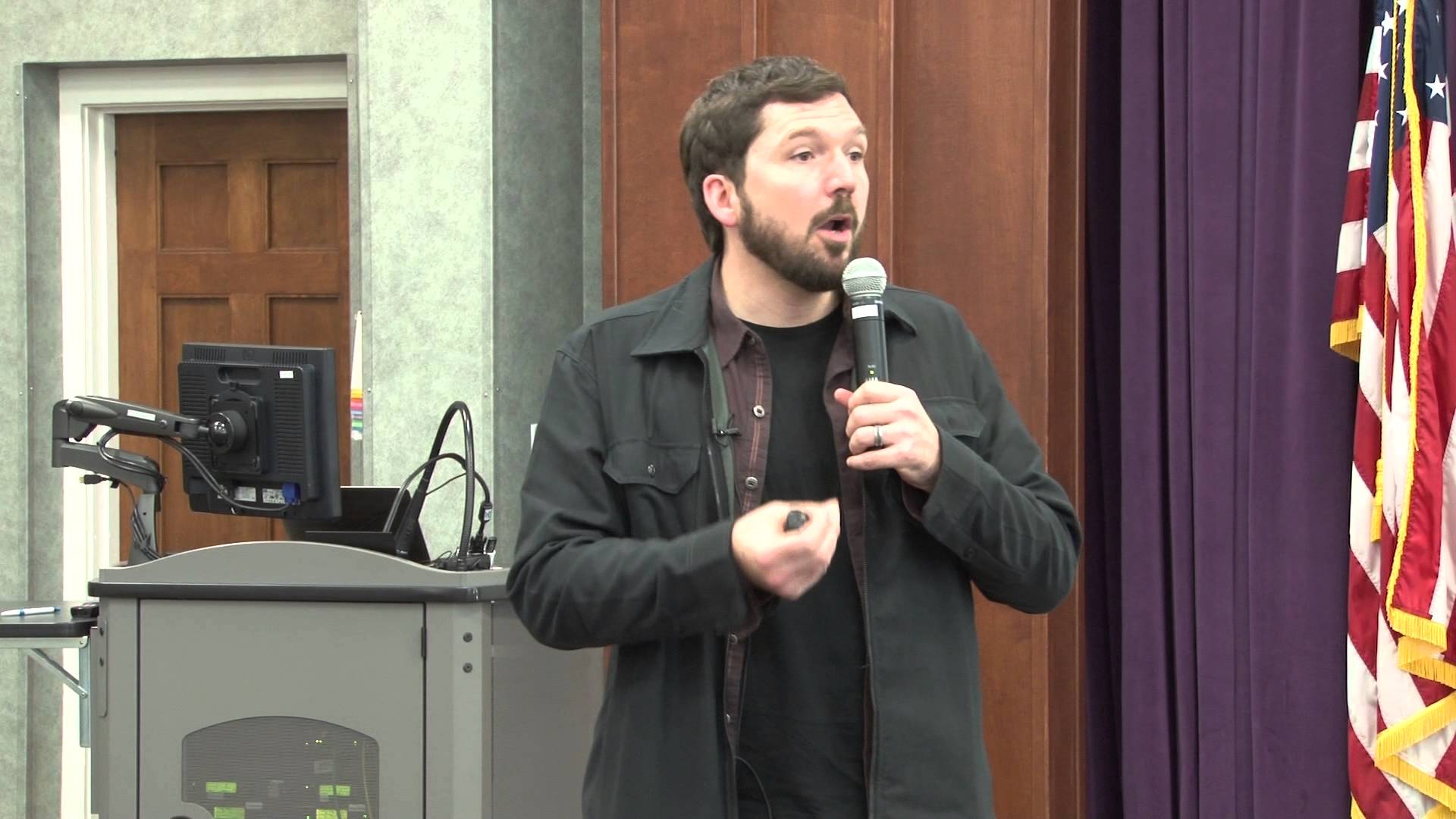 Jesse Stommel: The One-Room Schoolhouse for a Digital Age

Stommel worked his way through school as a web designer and film editor, “So all the time I was working on becoming an English teacher I was also thinking about new and interesting ways to use technology.” He started as a teaching assistant in 1999 and became an instructor of record in 2001 and quickly realized that he wanted a paperless classroom and wanted to put all his courses openly on the web. “Every course I’ve taught since 2001 is a MOOC minus the “m” part. They have all been open to the web because I decided that my responsibility as an educator was not just to the students in my class – I wanted a kind of open door classroom that would benefit both those inside and those outside the physical classroom.”

“In a physical space, sometimes I leave the door open so that people pass by and they just overhear stuff and they peer in and wonder what people are doing in there. I started experimenting with the digital version of leaving the door open, so people could stumble upon what the students in my class were doing. (In fact, a previous profile of Autumm Caines involved her stumbling in via Twitter conversations about Hybrid Pedagogy.) So putting my syllabus online wasn’t enough – I wanted to create a space for my students’ work. So within a couple of years, the sites I was building weren’t just repositories for my work, but also places for my students to share their work and to learn in public. That’s where my work germinated – from wanting my students to learn in public and the public to be able to happen upon the learning that was occurring in my classes.”

Stommel uses the word “hybrid” instead of “blended” to describe his courses. “For me, the difference is that blending takes two things and mixes them into one thing. When I think of hybridity, you end up with both things plus something that is made of all of the components together. You move between the parts, which don’t lose their original identities. The metaphor of blended learning suggests that the parts disappear into the blend.”

Stommel and students started using Twitter and hashtags because they “found it to be a space that best captured the kind of energy I like to create in a room – lots of people talking with and riffing off each other, not as monologues, but dialogues where people and ideas are in conversation with people and ideas. I’ve also used blogs – I like to build environments from scratch with WordPress. Blogs allow people to write a thousand words, then someone else can respond with a thousand words, but Twitter created a kind of space where dynamic ideas can form and bounce back and forth both tersely and quickly.”

They started with an activity called “the Twitter Essay” in which students were challenged to condense an essay into 140 characters. They would talk in class about what an essay is and how it works, what it does in the world, then try to achieve that in 140 characters online. “It was an exercise in thinking about writing as fractal – in which every utterance has an impact on the world. I don’t think I was using Twitter to its full extent until I started asking my students to work in networks and work with people on the web outside our classroom. At that point, it wasn’t just about loosing a Twitter essay on the world, but was also about engaging and finding like minds and unlike minds to dialogue with.” When Stommel’s students started interacting with his Twitter network “It started to break down this binary between me as the teacher and them as the students and enabled us to co-create our learning environment.”

Stommel’s creation in 2012 of Hybrid Pedagogy: A Digital Journal of Learning, Teaching, and Technology brings the same open classroom to educators in an online journal: “I wasn’t all that interested in yet another publication in the vein of traditional static scholarship – publishing research after it had been completed, reviewed, edited. I was still interested in rigorous scholarship, but created a forum where the publication is the beginning of a conversation – and where half-cooked ideas could be discussed prior to publication. I wanted to create a journal that would reflect the way so many of our pedagogical processes work – emerging out in the open and in dialogue. It’s not about hiding away in your room for two years, then delivering an essay to the world that is often about thinking in public. Of course there is a place for that kind of contribution, but I wanted to add a dimension. I wanted us – authors, editors, reviewers, readers – to think in public about thinking in public.”

By 2016, Hybrid Pedagogy has published more than 450 articles from 130 different authors – most of which are original for the journal. “Another thing we’ve tried to do is find conversations that shouldn’t be finished yet, and bring them back so we can keep those conversations alive.” (Hybrid Pedagogy republished in 2014 my own 1991 piece about thinking critically about technology).

Of course, organizing Twitter chats, WordPress blogs, and multi-author online journals that include works in progress is not the traditional path for an academic, but Stommel believes that “The work I’ve done on Twitter and with Hybrid Pedagogy is the reason I’ve succeeded in academia to the degree that I have. No, the journal doesn’t follow all the rules for academic journals. In fact, part of my goal always has been to push on the edges of those rules, not necessarily to make such journals into something else entirely, but to expand the form. There’s a sense that in academia you aren’t supposed to leapfrog conventional hierarchical structures and I’ve received both praise and criticism because of what I’ve been doing. If you want to work in education and academia, I believe we have to be willing to put our work on the line.”

Stommel’s academic credentials are traditional: he started at Colorado University at Boulder from undergraduate to PhD. From there he went to Georgia Tech for a post-doc in digital pedagogy, then to assistant professor and director of an online program at Marylhurst University, then to University of Wisconsin Madison as assistant professor, and has now taken the brave step of taking over the position that Jim Groom created at University of Mary Washington (with the help of Martha Burtis, Gardner Campbell, and others). “My trajectory has been about my desire to find spaces where people are not just working in education but actually doing the work of education. Hybrid Pedagogy, for example is not just a journal about pedagogy. We’re trying to model some of the pedagogies we’re talking about.”

Groom left University of Mary Washington to concentrate on A Domain of One’s Own, the program that Groom, Burtis, Tim Owens started (and which I used with my students at Stanford) that enables instructors and students to claim their own domains, configure their own servers, create their own WordPress blogs, MediaWikis, and other media that they can control themselves. Stommel: “Domain of one’s own is not a product or technology – it’s an idea. Let’s get students to own their space on the web, let’s get students to create and build their own habitats instead of learning inside of habitats that others had built. The question that I’ve been pursuing: “Now how do we take this amazing idea and infrastructure – both philosophical and technical – and teach with it? Now that we have A Domain of One’s Own, how do we get teachers to rethink their pedagogies?”

Another piece of Stommel’s work is the Digital Pedagogy Lab , a summer professional development institute now held at University of Mary Washington that had been founded by Sean Michael Morris – five days of immersion in workshops and discussions around “critical digital pedagogy.” Professional development – helping faculty use online tools to enhance or even transform their teaching – is central to Stommel’s mission. In addition to in-person classes at University of Mary Washington, the summer institute, open conversations online among students, teachers and networks outside the university, the Digital Pedagogy Lab offers online courses on “teaching with twitter,” “learning online,” “critical instructional design.” If you are a student, a teacher, or anyone who is interested in the kinds of activities Dr. Stommel has instigated, it’s not hard to join his online classroom. Dive into an online course or attend the summer institute if you want to engage deeply. Or if you want to dip into the stream at your leisure, follow @jessifer on Twitter.