Understanding and integrating new literacies related to the production and consumption of digital content has become essential for education in this digital age. Media and technology are helping to shape the way stories are produced and consumed. Becoming ‘screen literate’ as Kevin Kelly of the New York Times suggests is now an essential skill. By definition, transmedia storytelling is a non-linear mode of reading, writing, viewing, and participating that spans across multiple media platforms. The reader becomes a part of the delivery of the story, demanding participation rather than just consuming content.

The leading example of this transmedia phenomenon is the born-digital story Inanimate Alice. Written by award winning author Kate Pullinger, directed by digital artist Chris Joseph, and produced by Ian Harper, this transmedia story introduces us to Alice, a young girl growing up in the first half of the 21st century, and her digital imaginary friend, Brad. Unlike most digital content being used in education today, Inanimate Alice has not been adapted from another medium. It is not a traditional text-only story, which has then been recreated and enhanced in digital form. Rather Alice was conceived, written and created entirely within the digital domain. The multimedia episodes are interactive and use a combination of text, sound, images, and games to tell the story of her life. The media itself becomes a part of the story when Alice herself becomes a video game animator, and the reader is invited to play a game in order to progress through to the next stage of the story.

This captivating form of storytelling exemplifies reading and learning in the 21st century. Students are connected and engaged with text because the literary elements come alive. The viewer is tasked with multiple actions all of which add to the immersion into the piece. The simulated multi-tasking environment is suggestive of a computer game requiring the reader to solve puzzles before being able to access new portions of the text. They fully understand what it is like to walk in a character’s shoes. In the words of a young learner encountering the story of Alice, “After the first episode, I was burning with curiosity to see and read the other episodes in the series. Finally I finished episode 4 and felt like I had just fell off the building like Alice. The story is heart-pounding, exciting, and adventurous.”

An often used and effective strategy for presenting Inanimate Alice to students is to ‘immerse them in the genre’. From just the Inanimate Alice homepage, students can preview the text and begin extrapolate the elements of story. They can determine that Alice is the main character, have predictions about why she is described as Inanimate, and can draw conclusions about the setting being the country name for each episode and changing as the story unfolds. Students can draw upon their preexisting knowledge of story and draw parallels between chapters from traditional text and episodes from a digital story. Prior to each episode, a brief introduction is given on how
to read the story, which includes directions on advancing and
participating in the narrative. At the beginning of episode one, we first meet Alice at the age of 8 years old. The text and the participation in the story directly reflect Alice’s age and the level of her own technological skills. In the background we hear an electrostatic sound that helps us infer how Alice is feeling at the beginning of the story.

Music begins on the third screen and continues through the rest of the episode, conveying a feeling and a tone for each scene in the story. As the story unfolds, readers are introduced to Alice’s Ba-xi and are required to interact with it to continue the narrative. We use her Ba-xi to take photographs and on it meet Alice’s digital friend Brad.

The scene below depicts the climax of episode one when Alice and her mother find her father who they had been searching for. The mood and tone of the story is apparent because of the colors and style and further enhanced by the music playing as the scene unfolds. In this screen shot you can see the text as it displays on the screen as well as a ‘table of contents’ that develops as each episode progresses.

The highly participatory nature of Inanimate Alice gives us powerful insight into the future of reading and the power of transmedia in education. Designed from the outset as a story that unfolds over time and on multiple platforms, the online episodes are available on all devices capable of running Adobe’s Flash Player. As Alice’s journey progresses, new storylines will appear on additional platforms providing more details and insights, enriching the tale through surprising developments.

Inanimate Alice is a global story that people from around the world can both easily access and connect with. The episodes are available in five different languages. The Inanimate Alice Facebook page is a vibrant community in which teachers, parents, and students can go to share their success stories, enthusiasm, and reactions to the story. For example, Deputy Principal from Australia, Alison Kemp shared with the group that Inanimate Alice has grabbed her students in a way that means she can deliver a quality literacy program that has all of them searching for meaning, examine levels of comprehension, and deconstructing the writing. Alice has created a network of learners around the world by creating opportunities for students and educators to collaborate and connect.

Ian Harper, the producer of Inanimate Alice believes that transmedia storytelling is the perfect bridge from conventional to technology-based learning. The technology engages even the most reluctant of readers and has enabled these learners to connect with the story and deepen their comprehension. Through a downloadable iTeach education resource pack, Inanimate Alice is supported by lessons, which include using a digital story to explore character development and paragraph structure, making connections with the story and the medium, as well as examining the effects of music, sound, and images on the narrative. 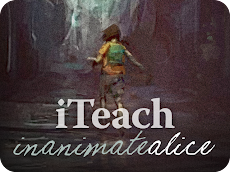 Putting students at the center of the learning process and giving them the freedom to create their own content as opposed to pushing it on them is an important element to learning in the 21st Century. Inanimate Alice represents a paradigm shift in how we approach reading and writing instruction.

In the 1990s, Bloom’s Taxonomy was redesigned to better reflect learning in the 21st Century. At the top of the new pyramid is ‘Creating’ in which students create new products or point of view. Participants in transmedia narratives are inspired to repurpose the content and generate their own, thus encouraging creativity and innovation taking them all the way to the top level of the taxonomy. In the case of Inanimate Alice, it is the inspiration of her story that motivates students to want to create their own. Students around the world have used critical literacy skills to deconstruct the digital text as readers and have used the knowledge they gained to write and create their own next episodes of Alice using the same character, theme, and style. Using the same techniques and strategies that author Kate Pullinger has used to create the text, students are encouraged to co-create developing episodes of their own, either filling in the gaps or developing new strands of the narrative. Next episodes of the series have been created on PowerPoint, which take Alice on further adventures around the world at various points in her life. In addition, students have created interstitial episodes that fill in the gaps in Alice’s story.

Students who engage with this story are motivated to apply the principles of this narrative to their own traditional writing. In my own classroom, students were able to take the multimedia concepts learned in our Alice study and apply them directly to their personal narratives. They storyboarded their own lives and through the addition of sounds, music, images, and interaction they successfully enhanced their own writing. In addition, students were able to take strategies used in reading a digital novel and transfer those skills into reading a traditional text. In my class again, we spoke about how we learn about characters in traditional novels (i.e. character thoughts, actions, external character traits, internal character traits, characters reactions to problems and challenges, dialogue). Then we talked about what elements are important for learning about characters in a digital story (music, sounds, visual images, games, etc….) Students being taught how to read this digital novel were extremely connected to Alice as a character. They learn to weave all of the ‘special effects’ into their understanding of story both as readers and writers.

Inanimate Alice creates a virtual circle of storytelling where transmedia meets co-creation inspiring many learners to write and create next episodes in the Alice series. These next episodes have taken Alice all over the world and on some extraordinary adventures.

Why is this Important for US as Teachers of Reading and Writing?

To be effective consumers of transmedia content, students need to have a firm understanding of narrative structure. An understanding of characters and plot is essential in understanding the form a story takes. Teaching students how to deconstruct text will increase their understanding of story and allow them to reconstruct and repurpose it to generate their own content. Drawing upon what students already know about story is an effective technique when building this new literacy skill-set. In the case of Inanimate Alice, a mini-lesson can be taught on what is known about learning about characters in traditional texts (i.e. character thoughts, actions, external character traits, internal character traits, characters reactions to problems and challenges, dialogue). Then stretching thinking to include what elements are important for learning about characters in a digital story such as music, sounds, visual images, games, and puzzles.

Direct instruction on how to read a digital story allows students to have a much deeper level of understanding about Alice as a character. For example, students may understand that the static sound in the story is there to help convey the tension Alice is feeling. Through the music in the story, students will able to determine the tone and mood- feeling uneasiness and happiness at various points in the story. Controlling the ba-xi makes students feel like they are Alice and they can see things from her point of view.

Learning how to effectively weave digital elements into their understanding of story, students are clearly more connected to Alice as a character.

Literacy adviser Bill Boyd explains what Alice means for him.

“Kids completely submerged in their work,” says teacher Kenny Pieper whose journey with Alice is quite a revelation.

Literacy- A New Concept in Reading

http://www.youtube.com/watch?v=-itUTAlahrw&feature=related Don’t know where these have come from

Reading and Writing Transmedia
One significant change to ‘Learning in the 21st Century’ comes in the form of “transmedia storytelling,” a process of writing a...
by Troy Hicks

(This is originally from my blog: Kevin's Meandering Mind)
by Kevin Hodgson

#DLDay Reflection Opportunity: #Literacies Chat on In School, Out of School and Online Li

(This is originally from my blog: Kevin's Meandering Mind)
by Kevin Hodgson
See All Posts
Collection