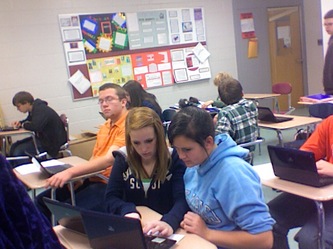 In the late fall, after setting my students up with Google Docs accounts and receiving my first assignment from them, I changed my “Single” status on Facebook to “In a Relationship”. My comment was “Yes! I’ve changed my relationship status! I am now in a relationship with  Google Docs!”

The response was pretty humorous. Seven of my tech savvy friends immediately gave me the thumbs up “Like” sign while others were confused and I received incredulous comments, including the following:

“Hahahahaha! And why is that?”

“I feel like I am in elementary school and all the big kids on the bus are talking and I want so bad to understand but I DON’T GET IT!!!”

“Google Docs is nice, just don’t do everything on the first date!” To which I replied, “Oh, we’re taking it nice and slow. Thanks for the advice.”

“You’re such a cute couple.”

Before the evening was over, I changed my status back to “Single”, and when the message with the heart came up that informed those who were interested “Kristi went from being ‘In a Relationship’ to “Single’”, there were more interesting comments:

“Me too…Congrats…would rather be single than be with someone who isn’t…lol!”

“Did you find a flaw?

And, again, from my own sister, “I guess I’ll put my good clothes back in the closet!

Near the end of this past school year, I began having dreams where I panicked because class was about to start and I discovered that there was no chalk in my classroom! We now have to requisition supplies from our office and have them delivered; the dream had me in dread of appearing unprepared in front of my students! In this nightmare I had a flashback to the first time I turned on an overhead projector, as a new teacher, and what I was attempting to display was on the wall opposite the screen behind me. Yikes! How did I cope in the classroom before we had 1 to 1 computer access?Open SAT_Words_3(2).ppt

That's is. I am banning posters and PowerPoints from my classroom. A...
by Jennifer Ward

I had the great honor and pleasure to take part in a fast-paced Ignite Session at NCTE in Boston. Ignites...
by Kevin Hodgson

The Art of Juggling Voices

(This is reposted from my blog) Last week, I had the pleasure of taking part...
by Kevin Hodgson

That's is. I am banning posters and PowerPoints from my classroom. A...
by Jennifer Ward

I had the great honor and pleasure to take part in a fast-paced Ignite Session at NCTE in Boston. Ignites...
by Kevin Hodgson
See All Posts
Collection