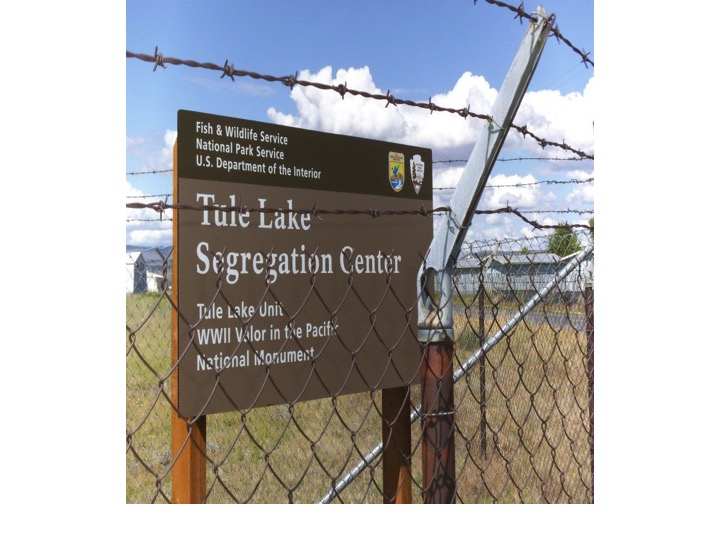 Between 1942 and 1946, 29,490 Japanese Americans were incarcerated at Tule Lake in California, representing nearly one fourth of the 120,000 Japanese Americans incarcerated during World War II. Tule Lake, one of the ten original incarceration sites became in late 1943 a segregation center where the so-called “disloyals” and their families were incarcerated. However, a critical lack of educational resources existed about Tule Lake. With a 2013 NPS Japanese American Confinement Sites grant of $73,675, the National Japanese American Historical Society (NJAHS) in collaboration with the Bay Area Writing Project (BAWP), the Golden Gate National Recreation Area (GGNRA), and the Tule Lake Committee used newly accessible primary documents, secondary sources, photographs, oral histories, and artifacts to develop a web-based inquiry curricula for grades 4-12. By illuminating the stories and experiences of those who lived behind barbed wire at Tule Lake, the lessons ask students to think critically about the Japanese American experience during World War II and how it connects to events today. 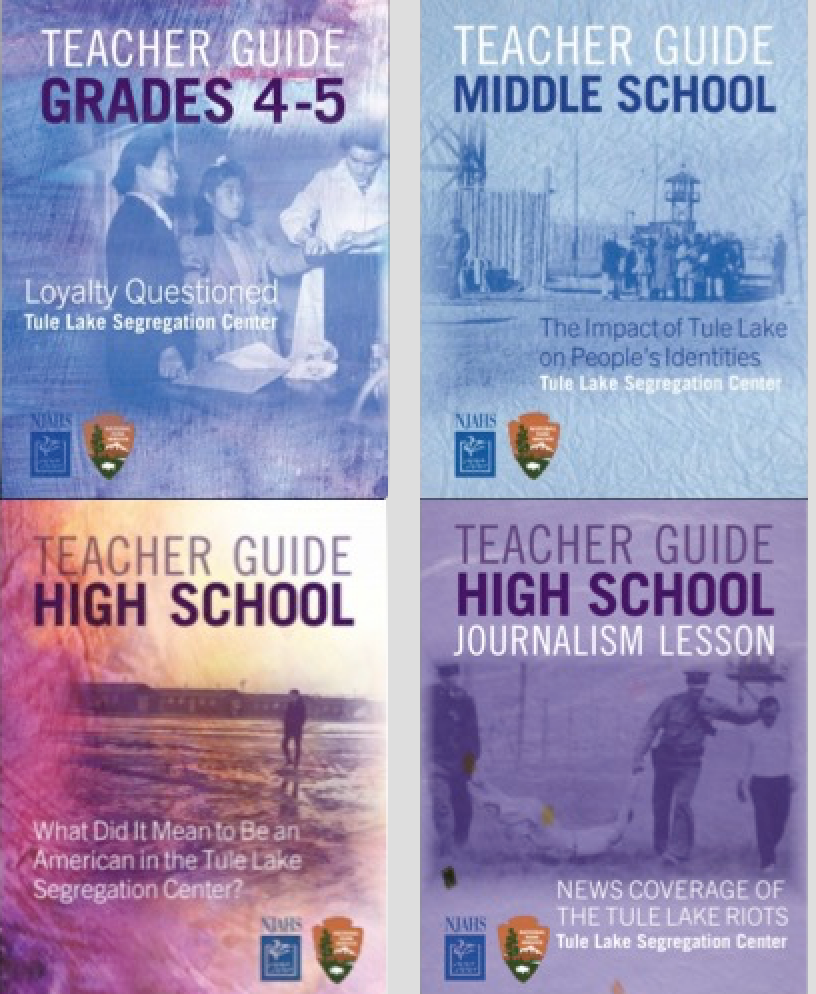 This project was funded by a Japanese American Confinement Sites grant (NPS). These grants are awarded to preserve and interpret the U.S. Confinement Sites where Japanese Americans were detained during World War II (for details about this grant and a brief review of previously funded projects go to their website). Key to getting this grant is establishing a relationship with one of the sites or related National Park Service (NPS) sites and/or a Japanese American community or educational group with an interest in developing programs related to the confinement sites. The National Japanese American Historical Society in San Francisco was the lead organization for the partnership that included the Bay Area Writing Project, the Tule Lake Committee, and the Fred Korematsu Institute. The NPS partners were the Golden Gate National Recreational Area (NPS) and the Tule Lake Segregation Center (NPS).  We received letters of support from the NPS superintendents. Go to the JACS site to review previously funded programs.

We had an informational flyer and application form for the Tule Lake Teacher Project Institute and for the Tule Lake Pilgrimage and distributed them widely to school districts and other professional development organizations such as the California History and Social Studies Project and the Stanford Program on International and Cross-cultural Education and Facing History. NJAHS and BAWP notified their networks of teachers. To recruit teachers outside of the Bay Area where we were known organizations, BAWP contacted NWP sites in Los Angeles and Seattle.  From BAWP’s outreach we recruited three teachers for the summer institute. NJAHS contacted Japanese American community organizations. Eventually we selected a group of 13 teachers for the institute and 12 teachers for the pilgrimage.

On the West Coast the story of the forceful removal of Japanese Americans during World War II is generally known, however, the details of the political and social climate that led to this gross violation of the US Constitution is not. Nor is the story of how the mass hysteria eventually developed in the Tule Lake Segregation Center and led to over 6000 citizens denouncing their citizenship at the end of the war well known.  Moreover, the euphemistic language that described the incarceration of people of Japanese ancestry underplayed the human tragedy and injustice of this story. For instance, the word “evacuation” is widely used to describe the removal of people of Japanese ancestry from their homes under guard by soldiers with rifles. The interplay of race, economics, war hysteria, and leadership were cited by the Committee on Wartime Relocation and Internment of Civilians (commissioned by Congress) in 1988 as the causes of this mass removal of people. By looking closely at the primary documents that substantiate these reasons, teachers sought to develop a curriculum that is relevant to today’s issues such as immigration, race, criminalization of Black and Brown citizens, treatment of Muslims, leadership, and the role of the press. The challenge was to development curricula that was practical and would actually be used in classroom. By going deep into this story, teachers asked about the historical thinking skills and historical content that students could tap as they examined other areas of the curriculum.

We were unable to participate in the Tule Lake Pilgrimage before the Summer Institute as originally planned so teachers viewed a PowerPoint to get a sense of place to provoke questions and direct their research. Place-based learning is the NPS approach to historical learning.

Then teachers not only examined primary and secondary documents and artifacts, but they also heard speakers who had lived in the Tule Lake Segregation Center and other incarceration sites. Speakers included Nob Mihara, a resident of Japantown before and after World War II, Hiroshi Shimizu, chair of the Tule Lake Committee, Hiroshi Kashiwagi, poet, writer, and playwright, Sadako Kashiwagi who was a child in Tule Lake, and George Takei, actor and activist.  Their personal testimonies made the story of Tule Lake alive. 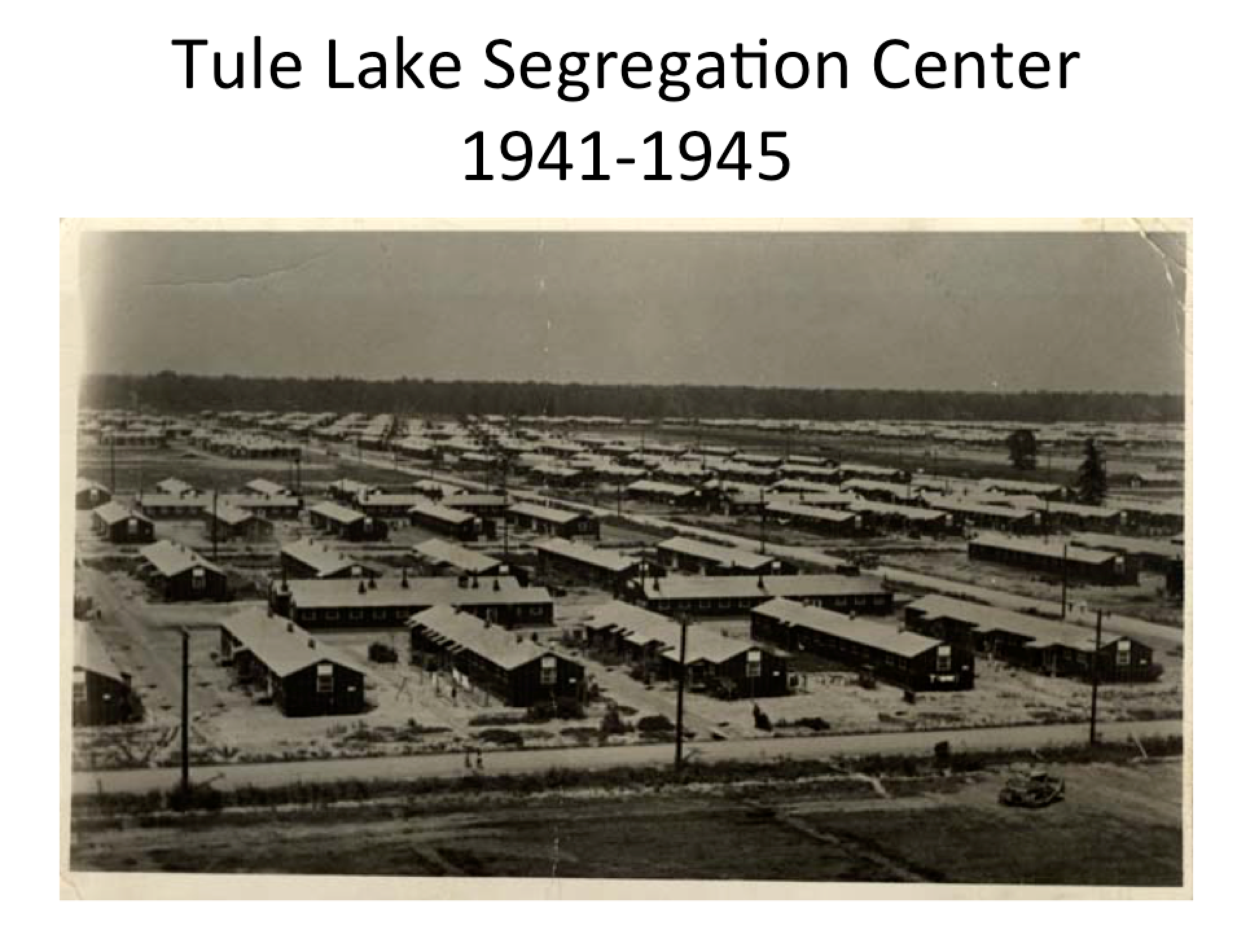 Nob Mihara, life-long resident of Japantown, San Francisco except of his years the Topaz Arizona American Concentration Camp, shares his memories of pre-war San Francisco and his life at Topaz.

George Takei sharing his memories at Tule Lake. He was 5 years old when his family was incarcerated first in the Jerome, Arkansas, Relocation Center then in the Tule Lake Segregation Center.

As teachers began their work, Bay Area Writing Project Teacher Consultant Stan Pesick reviewed concepts of historical thinking and writing in the content area. Our goal was to develop curricula that guide students to consider history as an argument, not just a series of dates.

Tools for inquiry and curriculum development

This 4-day institute laid the foundation for a yearlong development of the curriculum.

Teachers joined the bi-annual Tule Lake Pilgrimage  (July 4 to 7, 2014) held at the Tule Lake Segregation Center, California, and Oregon Technical Institute in Klamath Falls, Oregon. Tule Lake was unique among the War Relocation Centers in that it was where people who answered “no-no” to the loyalty questions were segregated from other Japanese American. Political dynamics in the camp were dramatically different from the others. Many incarcerated in Tule Lake renounced their US citizenship. But the reasons for both the “no-no” answers and renunciation were complex and varied. Our goal was to understand and capture the dynamics at Tule Lake that led over 6,000 Japanese Americans who once willing participated in the mass removal of people of Japanese ancestry to show their loyalty only to eventually renounce their citizenship.

There were over 400 participants on the pilgrimage, many of them former incarcerees and their families. The four days are designed to be an immersive educational experience for people from outside the Japanese American community and also, for younger Japanese American family members. For the former incarcerees it is a supportive and cathartic experience. Teachers were encouraged to get to know people and hear their stories.

Kaitlyn McQueen (on the left) gathers origami cranes to distribute at the memorial service at the pilgrimage.

They took this to heart meeting newly found friends for meals and activities. We met for nightly debriefs. As part of the Tule Lake program we held a panel discussion introducing the draft curriculum and extending the discussion to include the significance of resistance and activism in the struggle for civil liberties. Joining teachers, Karen Matsumura and Evan Blashingame on the panel were Karen Korematsu, daughter of Fred Korematsu who resisted the order for mass removal and eventually took his case to the Supreme Court, and Minnijean Brown Trickey who as a teenager integrated Little Rock High School. Grace Morizawa was the facilitator.

Tule Lake pilgrims gather for a memorial service at the site of the former cemetery.

During our evening debriefs we reviewed the draft curriculum and tried some of the activities. Below is a found poem from written transcript of Tetsjiro Nakamura’s testimonial composed by teacher, Katlin MaQueen on the Pilgrimage.

Our work with teachers did not end with the end of summer. We continued to meet online, by phone, and an in person with lead teachers to revise and refine the curriculum. We also piloted the work.

Here one elementary teacher who piloted the 4th grade curriculum talks about the effect of the curriculum on her 3rd grade students at the end of the year:

This curriculum is now available online. Through developing this curriculum in a community of teachers throughout the year, teacher expertise on teaching history and writing continued to flourish and grow following the National Writing Project model of teacher reflection, collaboration, and writing.

When I imagine sharing this curriculum with teachers, I imagine what it means fo...
by Kathleen Hicks Rowley