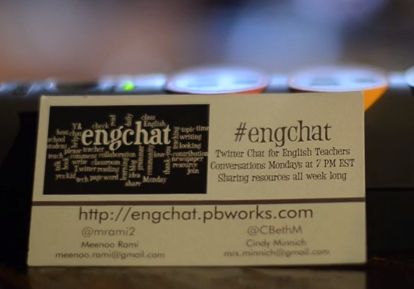 Meenoo Rami began hosting #engchat Twitter sessions in August 2010. Inspired and given confidence by fellow teachers and Writing Project mentors, she started the Twitter sessions as part of a search for community. She has described the process and her thinking about #engchat here.

Almost a year later, during the ISTE 2011 Conference in Philadelphia, the weekly Monday night session had Bud Hunt as a guest host. As an experiment, the hour-long session offered an option for attendees in Philadelphia to gather together in person in addition to the gathering they would do via the #engchat hashtag on Twitter.

Before the session, Bud did some thinking on his blog about what the purpose is of Twitter chats, and whether there is too much chatting, not enough listening. In the video above, Bud talks to Ben Grey about how the fast pace of a Twitter chat and of so much in our world made him want to practice and model pausing, and pausing to write.

In this shared Google doc, #engchat participants shared writing about how they find and make time in their days for reflective pauses. Bud invited people into the document by Tweeting it out, and then invited writers to tweet out links to their writing as part of the #engchat session.

One of the most powerful things learners told me was that I helped them recognize the signs of needing the pause and that I embraced/encouraged learners taking that time. While perhaps we have to create times and places, how do we help learners discover their times and spaces not confined by artificial school pieces? (@ryanbretag)

As a closing prompt, participants wrote about what they would take away from the fast-paced hour of conversation about pausing.

I want to remember that medium matters, but at the center of it all is communication. We all worked to transmit and gather meaning through our ideas. And though the pace was furious, and I might not have had the perfect aggregator for the conversation, I still gained quite a bit from the conversation. And there’s no doubt, it was a conversation. My thoughts were cast out in the mix, tumbled together with the others, and there was a yield from the effort. I must also remember to pause. That’s difficult. We move so quickly, as quickly as a Twitter chat often, but we must find time to slow it down. Slow ourselves down. To think, ponder, wrestle, and be ok that many answers don’t come immediately. Sometimes an answer takes time. A lot of times an answer takes time. And we have to be ok to give it. @bengrey

After the chat, Bud did some more reflective writing about the physical/virtual combination and the writing/chatting combination. He writes that the experience was “different, puzzling, and ultimately useful.”

And, in trying to process the collected thoughts of community members who came and went for an hour on a Monday night, Bud created a “found poem” of words gathered from the Google doc. The poem is a beautiful reconstruction of ideas about being writers ourselves, writing with students, and being sure we pause to listen.

As you may have heard, Wednesday, February 5 is the third-annual Digital...
by Jordan Lusink

Join teachers from the San Diego Area Writing Project as the...
by Kate Leuschke Blinn

A couple of years ago, I participated...
by Paul Oh

As you may have heard, Wednesday, February 5 is the third-annual Digital...
by Jordan Lusink