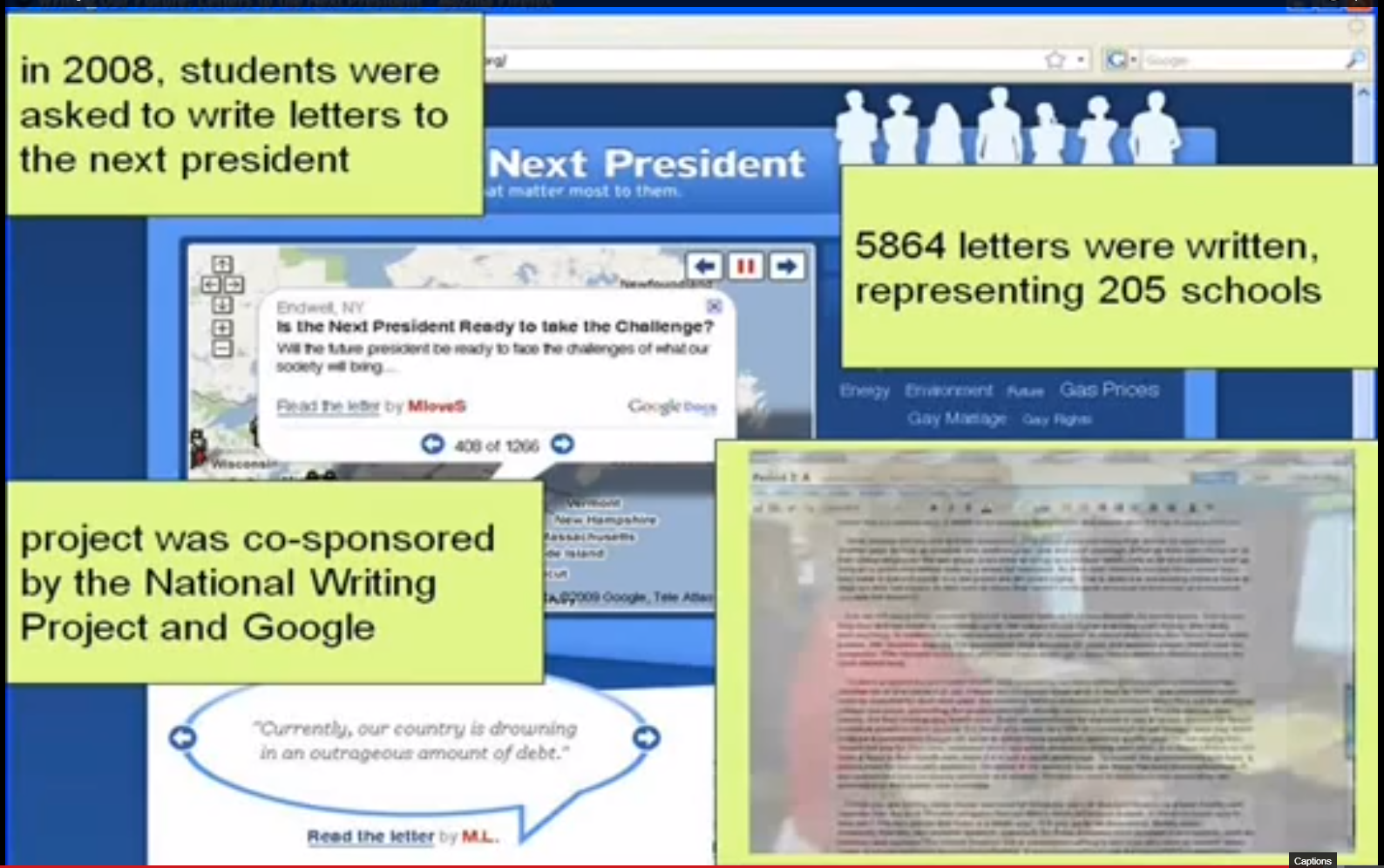 This presentation was originally delivered in Philadelphia in November 2009 at a convening for the National Writing Project’s DIGITAL IS… initiative.

My goal for the presentation was to get attendees warmed up for the amazing talking, thinking, writing, and working we did at the convening and to make a few arguments about what digital is.

In the presentation, you’ll find a set of framing arguments, specifically, that digital is: now and then; networked; collaborative; multimodal; re-mediated; remixed; and policed, and requires critical thinking and can be democratic. Also included are lots of  examples of exciting digital composing work that students and teachers are engaging in.

If you want to skim through the text of the talk alone, I’ve included it below.

SLIDE 1
Good morning! I am so delighted to be here today and to talk about DIGITAL IS.

My goal this morning is to get us warmed up for the amazing talking, thinking, writing, and working we’re going to do today, and to make a few arguments about what digital is.

SLIDE 3
What I’d like us all to think about as we explore these arguments together are the ways in which digital, networked technologies have changed writing.

SLIDE 4
Here’s a situating initial point: digital is now and then.

SLIDE 5
Any guesses what this is? (CLICK) (the internet, circa 1968) Trick question! The Internet didn’t exist in 1968! In fall 1969, the first message was sent over the system that became the Internet. We celebrated the 40th anniversary of the Internet just a few weeks ago.

SLIDE 6
Does this look familiar? (CLICK) This is the telnet-based view of the digital world in 1989.

SLIDE 7
How about this? (CLICK) This is the Gopher system, developed at the University of Minnesota, for browsing the Internet, circa 1992.

SLIDE 8
The web emerged on the digital scene in 1991, and a handful of us were using it in 1993, when it looked something like this. (CLICK)

SLIDE 9
And to teleport to today, this is the web, circa this week. (CLICK)

On Monday, President Obama spoke with citizens, students, and others in China. In one meeting in Shanghai, he noted:

“I think that the more freely information flows, the stronger a society becomes…societies benefit when citizens are able to go online, spread information and share opinions.”

Obama’s remarks—and his encouragement that the Chinese government loosen Internet-access restrictions—launched a flurry of debate and discussion on blogs and news outlets world-wide.

So, digital is then and now.

Jim Porter noted that the true technological revolution isn’t necessarily computers themselves, but sharing, writing, collaborating, and more across networks of computers.

SLIDE 13
That number was up almost 4 million since 3 months earlier.

Facebook has more than 300 million active users, and is home to more than 40 million status updates daily.

SLIDE 16
I captured this a month ago. This is a capture of gigatweet, showing about 10 seconds of twitter activity.

SLIDE 17
In terms of the power these networked spaces can offer our work and our classrooms, Paul Allison, one of the facilitators of Youth Voices, notes that “Elements of effective writing instruction can be amplified in networked spaces. What happens in blogging and in podcasting is these things, like audience, that can seem almost imaginary to students become real.”

SLIDE 19
Okay, a silly example, but I think a powerful one in terms of digital collaboration.

SLIDE 20
Thousands and thousands of users a day caption pictures of cats on icanhascheezburger.

SLIDE 21
Using a wiki, hundreds of people have collaborated to rewrite the bible in lolcat.

SLIDE 23
A search for writing returns more than a million items. (CLICK)

SLIDE 24
Joe Bellino, a teacher-consultant with the Maryland Writing Project, who teaches English language learners talks about the affordances of the collaborative writing space Google docs provides. He says: “From my perspective, [digital technologies are] not just something that helps kids improve their writing; they help the teachers be more effective teachers. And that has to have a payback to the kids.”

SLIDE 26
This is a response a writer created when I asked people I was working with to use text design to shape a message: “writing is not a genteel profession. It’s quite nasty and tough and kind of dirty.”

SLIDE 27
This is a quick kinetic type clip, a digital art form where composers take typically culturally powerful quips and typographically design them, working across color, typography, movement, and more.

SLIDE 28
Another example of rich multimodal work is from Reva Potter and her 7th grade language arts students, who write original poetry, then compose digital movies. Students work with textual analysis and representation, and select images and audio to complement their poetry and connect their work to concrete specifics.

SLIDE 29
Clifford Lee talks about digital storytelling and working with multimodal writing. He notes that “multimedia approaches to traditional subjects enables” him “to tap into the multiple intelligences of his students.”

SLIDE 30
We’re up to number four! Digital is re-mediated.

SLIDE 31
I want to show a silly, but illustrative clip of re-mediation, or the act of taking a media object and recreating or redesigning it to move across media.

SLIDE 32
Renee Webster, a first-grade reading teacher from Michigan has students compose narrative pieces. Students then record the pieces—remediating them from written narratives to audio clips—and upload them to the class web site.

SLIDE 33
Robert Rivera-Amezola talks about his desire to create a bridge across approaches and modalities. Remediating—having students take pieces composed for one medium and migrate them to another—can provide such a bridge.

Remix is taking bits, pieces, and parts of other media and mixing or mashing them together to create new messages and meaning.

SLIDE 36
Julian Marsano, an elementary school teacher in Brooklyn has his students select among digital materials and remix them to create public service announcements.

So we’re having students download and mix and mash and work with different pieces and media. What if those pieces and that media are owned by someone else?

SLIDE 38
This might look familiar to you. This is a “video no longer available” message on YouTube.

SLIDE 39
This is a Digital Millennium Copyright Act or DMCA cease and desist order sent to a YouTube user for posting content the person didn’t own.

SLIDE 40
This is a pretty compelling example of the over-policing of media. (PLAY VIDEO)

Stephanie Lenz posted a short clip of her kids dancing and playing in her kitchen. The video was forcibly removed by YouTube. Lenz, however, wasn’t going to allow that to happen, and contacted the Electronic Frontier Foundation, or EFF.

SLIDE 41
As educators, we have a powerful tool that allows us and our students to use copyright-protected work, and that is fair use.

There’s a great project called Media Literacy through Digital Production designed to help teachers understand and work with the Code of Best Practices in Fair Use for Media Literacy Education.

SLIDE 42
This is a clip from later in the video of Julian Marsano and his students’ public service announcements, created by selecting among and remixing existing media with their own creations.

SLIDE 43
And, certainly, policing or policy-ing doesn’t always have to do with the law. Bud Hunt has posted his own terms of use statement on the blog and other digital spaces he uses with students.

The policy, in part, informs students that they should treat blogspaces as classroom spaces and as tools for learning.

SLIDE 44
Two more! And I hedge these a little bit.

And again. AP-filed photographs from March 31, 2003. When the fact that the photographer had digitally spliced together two images to create a merged image, he was fired on the spot and sent a airplane ticket home.

And again. This is a photo of a group of University of Idaho students. And this ran as the main page top banner on uidaho.edu for about a week awhile back.

SLIDE 59
There are some wonderful tools available to help us use these sorts of materials in our classrooms and equip students to be careful, critical, thoughtful users of digital media.

Joyce Valenza, a Pennsylvania high school library information specialist—and blogger and presenter and author—has some fantastic materials online, including her CARRDSS tool, which asks students to assess the credibility, authority, accuracy, reliability, and more of all digital media.

SLIDE 60
And, finally, my last argument and another hedged one: Digital can be democratic.

SLIDE 61
(CLICK) During the Iranian election this summer, journalists were told not to leave their offices. (CLICK) The state-run media downplayed claims we were hearing about gatherings and protests. (CLICK) This is a cell phone pic of a crowd in Tehran, posted to twitter. (CLICK) During the fallout after the elections, more than 400 new tweets a minute were coming out of Iran.

SLIDE 62
In the U.S., back in 2008, CNN and YouTube hosted presidential debates, where folks videorecorded their questions for the candidates.

SLIDE 63
(CLICK) In 2008, students were invited to write letters to the next president. (CLICK) The project was co-sponsored by the NWP and google. (CLICK) Almost 6000 letters were written. (SHOW VIDEO)

SLIDE 64
So, phew, digital is now and then; networked; collaborative; multimodal; re-mediated; remixed; and policed, and requires critical thinking and can be democratic.

SLIDE 65
Finally, writing is digital. And with that, I leave us to continue to explore what… digital… is.

Digital Is...
In November 2009, I had the honor and privilege of speaking to a group of NWP leaders, teachers, consultants, and friends at a c...
by Danielle Nicole DeVoss