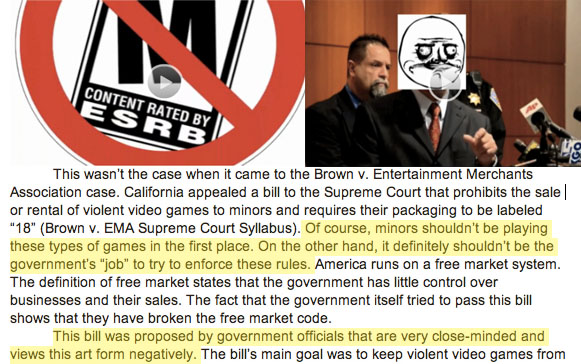 Note: While composing this resource, I discovered a very similar resource from Leslie Moitoza — Rethinking Composition in a Multimodal World. Her piece addresses how do to video writing from the ground up, where in my class we came to it backwards.

As I wrote in an earlier resource for Digital Is, at Science Leadership Academy we sometimes worry that our multimedia-rich education is a stark contrast to what our students will be facing when they graduate and enter more traditional college environments.

I would not say that we’re doing them a disservice — indeed, many of our recent graduates report that they appreciate the digital literacy they have going into their college years. They can spot your poorly-designed powerpoint from a mile away, and they’ll have a Prezi done in no time flat which looks much better.

Still, a cornerstone of the junior English curriculum is spent on the 2Fers, a pretty traditional analytical essay format. You can write about whatever you want, but it’d best have a clear thesis and sources properly cited. So there.

It was partway into the year when one of my students lamented that one of his papers just wasn’t fit to be argued in a written format. It was about video games.

I’ve read plenty of great essays on video games, I told him. (It’s true.) But explained that he wanted to do a thorough analysis of how certain video games had become more cinematic in both their production and narrative threads. He found it cumbersome to describe both the games and the films in sufficient detail.

He had a point. Why not just show it? For visual media in particular, we don’t need it translated into print so we can read it in our Sunday newspaper anymore. Even The New York Times, protectress of the written work, produces short videos to accompany movie reviews (and plenty of other topics).

So in the middle of the year, I decided to do a little reverse engineering, and go from written work to video. Enter the Visual 2Fer.

The official write-up for the Visual 2Fer went like this:

Your task is to create a multimedia version of any of your 2Fers written so far this year. Here are the requirements:

1. The final product must be visual and play no longer than one minute. (You will probably have sound, too, but I’m not requiring it.)

2. You must faithfully represent one of your thesis arguments — you can’t change your thesis. Your examples might change a bit though, depending on what kind of visuals you find or create.

3. Any content that is not created by you MUST be cited, but you do not need to follow MLA format — just include the link either on that slide/section, or all listed at the end.

The rest is up to you! These will be posted on our public blog for consumption by the general public, so make sure your work is professional.

If you make a video file, you will have to convert it into an .flv — you have a program called “flash video encoder” than can do this for you. Slide shows and prezis can be embedded, but they have to play on their own!

There are countless videos that can be used for inspiration here (and many more that show what not to do). After some quick searching the night before, I showed two in class. The first was from the “One Minute Physics” channel on YouTube. The second was YouTube’s own ad for its education features, which I discovered when it constantly appeared as a featured video during my own searches.

Students were naturally attracted to the polish of the professional advertisement; at first they actually thought it was a student work, which brought us to the key point that you can make money doing this stuff. They also appreciated the conciseness and clarity of the science video (they were all in Physics at the time.)

We replayed the videos and counted how many discreet ideas were shared in each video. Students then turned to their own essay collections and had to do their own distillation: how do I boil this work down to six, eight, or maybe ten ideas? We then spent time in class with some printed storyboards — students weren’t required to turn in this draft work, but many of them spent time sketching out what image would accompany each idea.

We set a “rough cut” deadline for the project — just like with their essays, students were expected to have a complete draft at the beginning of class, and then gave each other feedback at the beginning, with time to add and revise at the end. Some students produced works that were closely inspired by what we had watched in class, including one whiteboard drawing video about the influence of technology on daily modern life:

Another video borrowed YouTube’s headline-style commentary and toe-tapping soundtrack — only this time the topic was government regulation of video games:

Considering the strength of these works, I regret not showing more videos in class, to give kids even more ideas to play with–or, alternately, set up a dedicated browsing activity. Never mind that YouTube is blocked in my school district. It was fascinating to see what images, sounds, and organization methods students selected. As the subjective teacher, I would say there was a loose-but-noticable correlation between good writers and capable video producers. A student who had written a crystal-clear essay analyzing the pentatonic scale produced a similarly well-organized video:

One challenge during grading, however, was separating my personal aesthetic taste from my assessment of the overall quality of the product. Did it convey the thesis clearly, with logical support? When considering that question while reading essays, I expect a pretty traditional, college-level writing style. But the whole point of this assignment was to broaden our methods, and the samples I showed were pretty pop-minded. In the video below, I didn’t love the look of it — but by the stated criteria it was very successful:

And besides, I was only one viewer of many, since these were posted to our public blog and the whole class had time to watch.

After so many months emphasizing the writing skills students need for college, this assignment was a pleasant reminder that fluency in other mediums is also useful. After four years of term papers, these kids may find themselves in any number of careers and/or creative pursuits that have them presenting ideas in this way.

The assignment was also a nice warm-up for our Public Information Campaign project, where students created campaigns around issues relevant to Philadelphia. In that project, students had complete freedom in choosing the medium(s) for their work, but had to complete an annotated bibliography first — another reminder that every quality product requires good research and planning.

One lingering concern I have is that I didn’t encounter many (or any) students who did significantly better work with the video than the original essay. Would it be appropriate for me to conclude that you need to be able to organize an argument in a written format before you can present it anywhere else? Or did the fact that the assignment was tethered to already-produced essays hinder some students, who might have done wonders if they had started with a clean slate?

This line of inquiry eventually brings me back to the question of how structured the assignment needs to be in the first place. In theory, I am comfortable with students producing work in any medium, of any length, as long as it presents insightful analytical thought in a way that is easy to understand. The realities of my teaching load and my environment, however, require at least some boundaries. Not that it always works out. The student who inspired this project did not react well when I introduced it — he complained bitterly that a one minute cap (which many students appreciated) prevented him from achieving what he would want. In the end, he never completed the project.

Should I have waived that restriction from him? TV commercials have to be a certain length, I rationalized; professional pursuits can often be just as restrictive. Now that the school year is over, though, I lament not having a product from him to review. Digital formats give us so much freedom and autonomy, the kind the even the most progressively-reminded teacher can hit their head against. I hope I can remember to be more flexible next time.