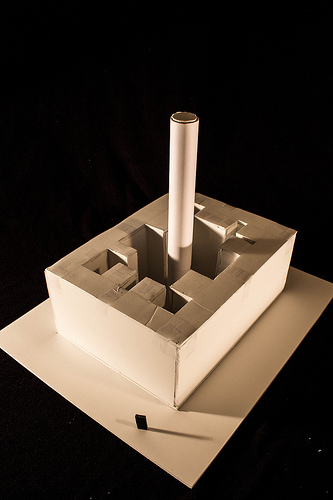 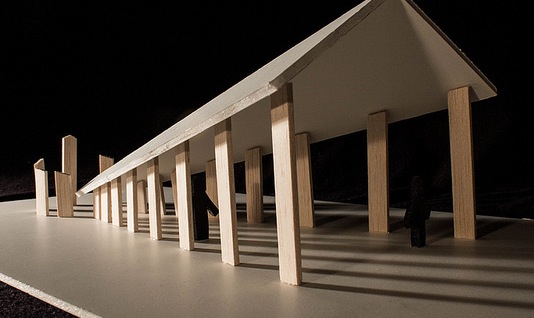 “Overall, this project was a rewarding experience. It took a lot of thought to create the structure. Not only did we have to conjure an idea, but we also had to convert it into a tangible object,”
Patrick & Wilson, 10th Graders

I’m not an architect, nor do I have any training on how to design a building. But this summer, I was inspired to teach basic principles of architecture in my English class. I read an article in the New York Times, “Writers as Architects,” that got me thinking about how buildings are like stories. Matteo Pericoli, an Italian-born architect, illustrator, teacher and author, described a course he taught last spring at Columbia University School of the Arts called “The Laboratory of Literary Architecture.” During the course, creative writing students at Columbia created architectural structures inspired by their favorite pieces of literature. They teamed up and collaborated with architectural students who helped them design their structures, or models.

As Matteo explained: “Great architects build structures that can make us feel enclosed, liberated or suspended. They lead us through space, make us slow down, speed up or stop to contemplate. Great writers, in devising their literary structures, do exactly the same.”

Matteo included images of the completed student structures along with short pieces of student writing. The work was amazing and I was immediately inspired to attempt a streamlined version of this with my 10th grade English students. I thought it would make a great culminating project for our first novel of the year, The Catcher in the Rye, by J.D. Salinger. However, I knew this would be a challenge. For one, I don’t know a lot about architecture. I also had no idea how to teach students to build architectural models, or even what materials we would need. However, I suspected my students would appreciate the opportunity to do something unusual like this. It would force them (and me) to think about literature in a new way.

I began searching the web for any information I could find about Matteo’s course, The Laboratory of Literary Architecture (see more links below). I also sent e-mails to Matteo and a few students at Columbia who participated in the course last spring. I asked if anyone would be open to Skyping with my class throughout the project. Within a few weeks I had multiple Skype talks scheduled, including a few with Matteo (from his home in Italy!). I also invited two graduate architectural students from The University of Maryland, David Ensor and Abraham Murrell, to come in and teach us basic model building skills. David and Abraham taught us how to make accurate and clean cuts, gave us tips for gluing and most importantly, taught us the correct methods for using our exacto knives without cutting ourselves. One of the coolest parts of this project was collaborating with so many different people, both in person and online via Skype. Here’s a shot of David teaching students how to properly use their exacto knives. 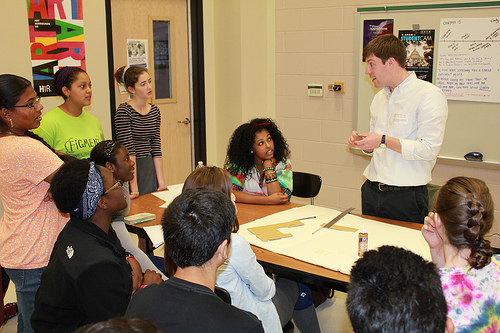 When I first introduced the project, the students were pretty confused. Fortunately, we were able to Skype with Matteo so he could answer our questions. In our first Skype conversation, Matteo summed up the project beautifully, telling them, “You are designing a space that will resemble your intuition about the novel.”

He explained that entering a novel is similar to entering an architectural structure. Literature, like architecture, can evoke strong emotions and feelings. So if my students were going to design and build meaningful architectural spaces they first had to connect with the novel on a very personal level. As the students read The Catcher in the Rye, I asked them to take notes and make annotations on parts of the novel they found significant. Class discussions revolved around talking about the text and the structure and the flow of the text. We also talked about mood, tone, symbolism, theme and first person narration. These literary terms would play an important role in the student’s later design decisions for their architectural models. I also introduced a basic list of architectural terms and concepts. Many of these terms are similar to literary devices. Through our discussions with Matteo students began making connections between architecture and literature. 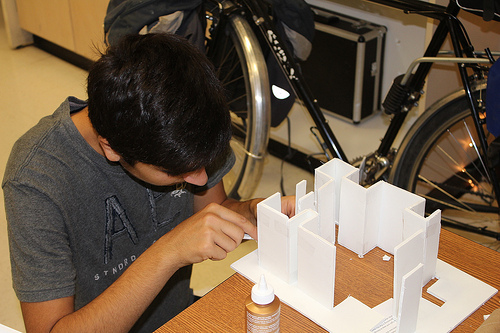 As we neared the end of the novel, students began brainstorming ideas for their structures by doodling and drawing rough sketches on large pieces of bulletin board paper. As Matteo pointed out a few times, this was an important aspect of the course: giving students ample time to play and experiment with possible ideas without worrying about being wrong. Students had to decide what particular aspect, or aspects, of the novel they were going to explore in their structures. All their design decisions had to be based on elements from the novel. It was a difficult task. Student design ideas went through many iterations throughout the process. One of the mantras of the project, as Matteo reiterated many times is: Literary NOT Literal.

Here is a short video montage I created of insightful comments from Matteo during one of our Skype conversations:

Once students had some good ideas for their structures they began working in their small groups to create test models. This was another critical step in the process that forced students to rethink/reimagine their original plans. The test model is similar to creating a rough draft of a piece of writing. For the test models we just used common cardboard and paper. Again, it was important that students were free to play and experiment as they attempted to create their test models based on their earlier sketches. As the students completed their test models, many of them struggled with their final design decisions. I e-mailed Matteo and asked if he would be available to Skype in and talk with different groups about their designs before they started their final models. Fortunately, he agreed to Skype in to talk with specific groups about their ideas. I set up my lap-top in an adjacent room and various groups had 10 to 15 minutes to talk directly with Matteo about their projects. I thought it was amazing that Matteo, who lives over 4,000 miles away in Turin, Italy, could basically step into our classroom via Skype to help my students one on one with their design ideas.

You can check out all the final student structures and read the project reflections on a website I created to share the work titled, Constructing Holden Caulfield. Students were not creating structures, spaces or settings that actually appear in the novel. Instead, they had to convey what they felt was significant about the novel in architectural terms. The crucial question for them was: How can they create a space that represents an important aspect of the novel from their point of view? It’s a challenging concept to get your mind around, and definitely forces students to use their critical thinking skills.

Thanks to the following people for helping us!

Making in the Media Center

Yesterday I had the privilege of leading a workshop at North Pitt High School...
by Stephanie West-Puckett